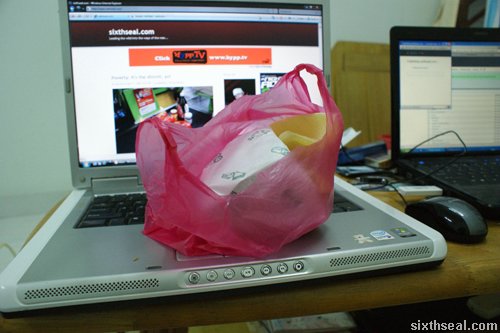 Hot damn! I went to the friendly local neighborhood Ramly Burger stall and ordered a Double Chicken Special Cheese (RM 5.20) for my supper. I was prepared to fork out that amount coz I’m a little sick of eating bread with marmalade every meal.

Anyway, while the dude was flipping my burgers, this van pulled up with a PDRM insignia in all its glory emblazoned on the side of the vehicle. The car plate was WXX 28XX and it offloaded four (4) people – one in police uniform. The others were drunk, judging from their gravy stained shirts and the offhanded way they were consuming their lok-lok.

Well, one of them struck up a conversation with me – small talk, mainly about burgers and stuff. I found out that they are from the Narcotics Division of Bukit Aman (I shit you not) and they acted like they owned the place. I was a bit miffed when the burger guy served them first, and was about to voice out my displeasure at the preferential treatment when the alpha male slapped a RM 50 note down and said everything is on him.

There were about 7 people there – the four police (high ranking ones judging from their attire and attitude), myself, and two kids. The top dog paid for all of us, making a circular gesture with his forefinger to indicate that everything is on him. I wanted to pay my share but the burger guy refused payment – “Boss belanja“, so I reckon they must be regulars as well.

Thus, I nodded at the man who paid for my burger and said thank you. He smiled (in a rather inebriated manner) and waved it off with a shrug.

(or at least buy you a burger)