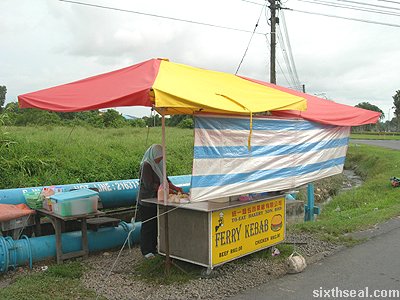 Kampung Hilir is a Malay settlement accessible from a small turning in town which leads into the scenic drive in predominantly Chinese Sibu that showcases the best cottage industries the kampung has to offer. There is a very popular kebab stall that’s been around for as long as your grandma’s grandma – it’s called Ferry Kebab and it’s manned by a husband and wife team. 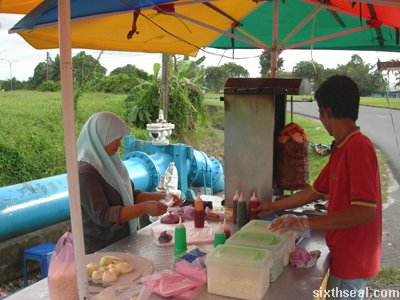 There used to be two kebab stalls opposite each other but the first establishment (and the best) seems to have usurped the other one as only Ferry Kebab is left standing. It’s basically a stall selling kebabs (Malay style). The kebab stalls over here is very distinctive – there is what seems to be a huge chunk of meat skewered into a manually rotational implement, with good ol’ fire (as in flames) baking the meat to perfection. 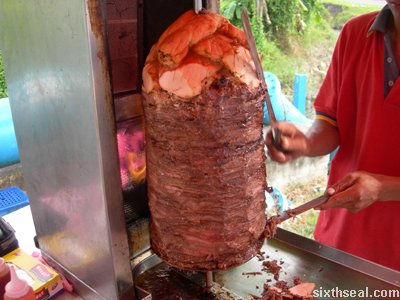 This is a closer look at the kebab setup – the chunk of meat is easily as large as the torso of fully grown man…which in hindsight is a bad size comparison. 😉 Notice the flames heating the mass of meat from behind – it’s best to go in the evenings as that’s when the operation starts. The hunk of meat is sliced with a long sharp knife and a wooden spatula like implement into slivers and the skewer is turned around as the slicing is done to ensure a consistent cut. 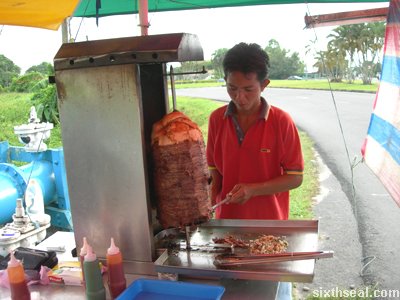 The meat from the chunk of kebab is then mixed into a preparation of raw onions, cucumber, and various other diced vegetables. Requests for additional ingredients are catered to without extra charge and I always go for more raw onions – it makes the kebab taste better. 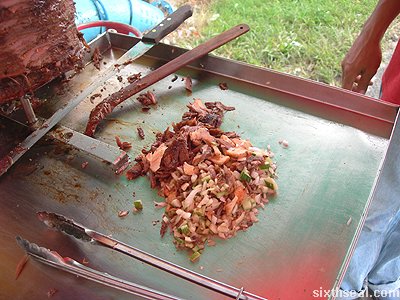 This is a closer look at the modular kebab setup – there is a preparation area right beneath the skewer of meat, and the sliced slivers of meat is mixed into the condiments to make the contents of the kebab. 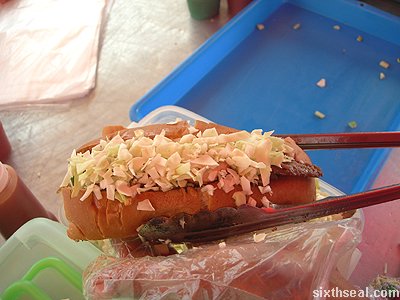 The kebabs over here are not, by definition, skewers of meat on a stick/metal spear. It’s the by product of the above, stuffed into a hot dog bun, much like a Sloppy Joe. The kebab bun is then topped with finely shredded lettuce and more onions… 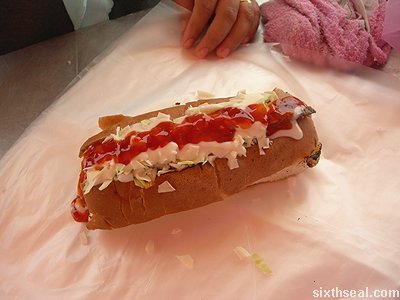 …before a slathering of mayonnaise and chilli sauce is applied. It’s not for the faint hearted or people who’re on a diet. 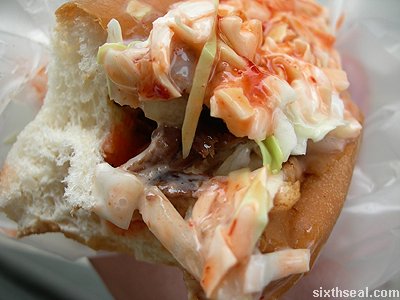 The kebab from Ferry Kebab retails for a mere RM 2 each, which makes it a popular evening snack over here. It’s best enjoyed outdoors. 🙂