[Update: (3:31 AM) Just received another note. Scanned and added below.] 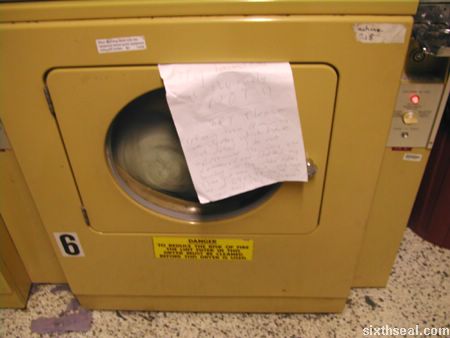 I was so fucking pissed off just now…was all ready to (action which
would result in an assault conviction) the person responsible. I have a
quick temper and the stimulants (caffeine, caffeine, told ya in the
McDonalds post back there) coursing through my bloodstream exacerbated
things and I was dead set on waiting in the laundry room to physically
confront the asshole that removed my still damp laundry from the
dryers. The problem today was caused by the fact that 2 of the 6 dryers
in the laundry is out of order, another one keeps on stopping so you
have to constantly restart it, another one only blows cold air, so that
leaves 2 dryers for the whole of Roberts Hall. One of those only
produced slightly warm air while the other (which my laundry was in)
had true hot air. I had returned to find my laundry:
1. Stuffed in a corner cubbyhole with a fucking wet underwear that isn’t mine
2. Stuffed in a center cubbyhole with a sock that isn’t mind
3. Scattered on the floor
Tell me you wouldn’t give in to violent urges if this happens to you.
There’re some fucking inconsiderate ressies who wouldn’t think twice
about conveniently removing your laundry on the grounds that it is
already “dry”. Yeah, it’s easy to see that the outer clothes (the outer
part of the bunch dries faster than the inside of the bunch) is
somewhat dry and pretend that the ones in the middle of the bunched up
laundry isn’t still damp. I was very pissed off about the way my
laundry was scattered and stuffed indiscriminately too. Fuckers!!!

I waited a while, but didn’t have the patience to stay the whole
night, so I took the person’s laundry out and put mine back in (the
dryer is rightfully mine until my clothes are dry). This was when I
noticed that the person responsible is female (from the contents of the
dryer). That’s no excuse though, but I stopped my violent ideations (is
this sexist behavior?) and stormed back to my room to write a message
to stick on the dryer instead. I didn’t take a photo or scan my message
(yup, I still remember about images even in this state of mind :p) but
I did take a photo of the dryer (that’s the picture above) after I
stuck my message in there. I managed to exercise restrain and worded it
politely, but I also wanted to send a message that it is UNACCEPTABLE
BEHAVIOR to do that. The message is blurry because it’s cropped from
the larger original photo size (the one above) and that had suppressed
flash on. It goes: 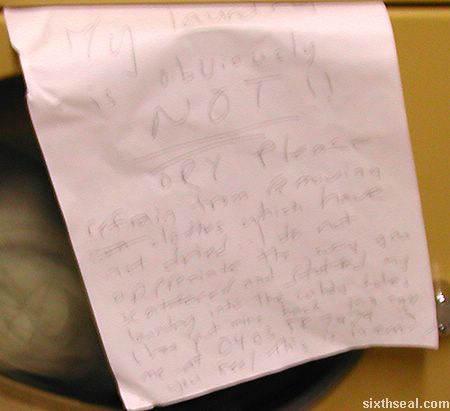 If the text is not legible to you (I did try liberal sharpen filters, but it’s still blurry) here’s a transcript:

My laundry
is obviously
NOT!!
DRY. Please
refrain from removing
(crossed out text) clothes which have
not dried. I do not
appreciate the way you
stuffed and scattered my
laundry into the cubby holes!
I have put mine back in. Call
me at (my cell phone number) if
you feel this is in error!

Needless to say, being annoyed does not make one eager to observe
the grammatical and sentence structure rules, but it gets the point
across. I stuck that onto the dryer and waited for the phone call. I
didn’t get one though, so I just returned to the laundry room 30
minutes later (coz my laundry should be dry by then) and saw that my
laundry was still in the dryers and my note has been untouched. Or so I
thought…upon closer review, the note isn’t the one I wrote. She has
posted a reply and stuck it there instead. I looked for my note (wanted
to scan it) but it wasn’t anywhere in the laundry room nor the garbage
bin (I checked) so I figured she took it with her. That’s why you have
to settle for the blurry pic and the transcript above. Anyway, this was
her reply: 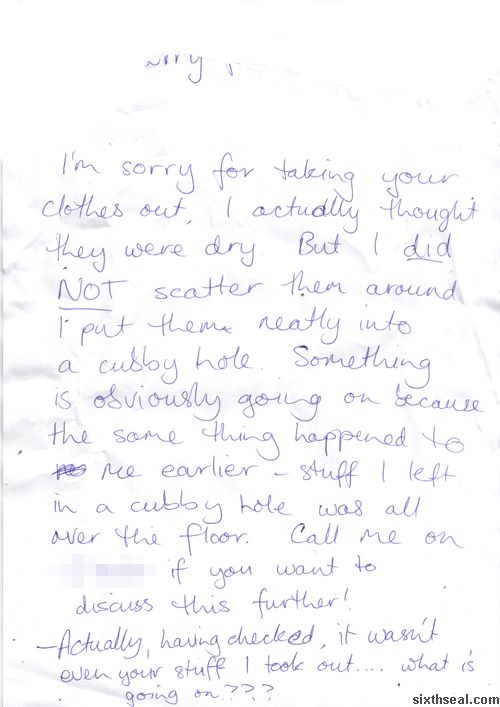 Now that made me feel really bad. I wasn’t angry anymore (stopped
after 15 minutes). I have a quick temper, but I can’t stay angry for
long. That’s one of my good personality quirks. 😉 I also felt guilty
about everything coz it wasn’t her fault after all and she was victim
to this mysterious laundry room asshole as well. Anyway, I put her
laundry back into the dryer so she wouldn’t have to queue if someone
came in before her. She was next anyway, and it was the least I could
do. She left her number (mosaic applied for her privacy) so I called to
apologize. She wasn’t in and I got her voicemail so I left a message to
apologize for the mix up and told her that her laundry is in the dryers
now.

I still didn’t feel very proud of myself though, so I called again
10 minutes later and got her on the phone. I apologized for the mix up
and she apologized too (though she didn’t do anything wrong). She also told me that she lives just one floor above me!
I was mortified…I knew who she is now. It’s the friendly girl from
upstairs whom I don’t know personally, but we have a “hello-and-smile”
relationship. How embarrassing…but it’s cool though, ended the
conversation with “everything’s okay” from both parties. So all’s good
and well. Except for the mystery laundry messer…you just wait till I
sn…er, drink some coffee and I’ll be coming down on you like a
ton of bricks. If I’m still angry that is…right now I’m more tired than
anything. I’ve been up since 10 pm yesterday and that’s just over 27
hours, which should be nothing…except I’ve been exhausted since early
afternoon. Anyway, that’s the Roberts Hall laundry fiasco. 🙂

I just received another note. It was stuck outside my door and I
only noticed it when I went to the toilet just now. That’s very nice of
her, really appreciate the kind gesture! 🙂 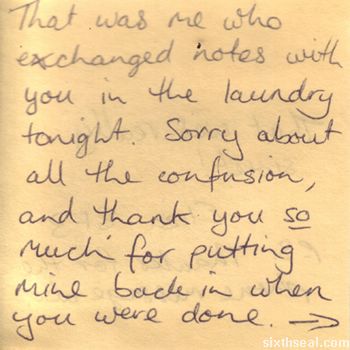 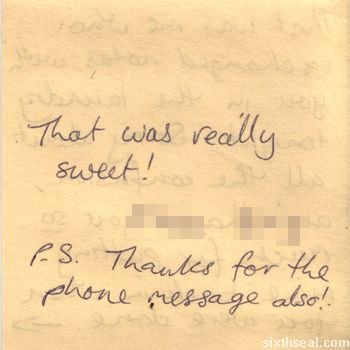 Mosiac applied to name and room number to protect her privacy.

I’m very disappointed at the predictable and immature way I reacted
at first though…I thought I had the “temper, temper” bit under control,
but apparently not. However, it’s been 6 months since my last one, and
that’s pretty good progress. 🙂 I don’t want to send myself to an early
grave with the strokes and the heart attacks. I just lose it over silly
things, that last time was so ridiculous I feel stupid. Please don’t
laugh, but I actually got into a pissing match in IRC! Yes, the realm
of retards and trolls. *hangs head in shame* It was a local channel and
this teenager was just provoking me, getting my panties all in a twist
by talking shit about my father. I retaliated by telling him to walk
the walk, and told him to meet me at this car park near my house in 10
minutes. He further irritated me by going “hahaha” and not replying to
my challenge (yes, yes, I know I’m childish when I’m pissed) so I
questioned his manhood in the main channel, using classics like “Do you
even have balls down there?” and “Pussy, what a fucking coward” and it
took 35 iteration before he finally got pissed enough to accept, so off
I went (in my pjyamas, no less), grabbed the nearest thing (2 by 4),
and drove out in the rain at 3 am in the morning.

I circled around the area for a full 25 minutes and got soaking wet
but didn’t see anyone. I called my friend who was online and in the
same channel, and she said that guy was in the channel! This made me
twice as pissed and I drove back and made about 300+ taunts using
creative variations of all insults possible, I even had to resort to
“Your mother’s a slut” before he really got pissed and said he’s coming
out now. So off I went again, I was helluva cold in my wet PJs and I
had to wait another 30 minutes and no one turned up! He must be
laughing his head off in his comfy room. What right thinking person
would waste so much time for nothing? Just stupid me. Anyway, I wasn’t
pissed anymore after that, the cold just made me want to go home and
take a hot shower. While showering, it just occurred to me that it’s
not possible for a 16 year old to have a driver’s license! Now you know
the extent of my silliness. I’m not a hardass or anything, my panties
just have a high affinity with knots, so that’s why such things happen
to me. Oh well, back to assignments. I could have finished one if I
hadn’t started with the written version of verbal diarrhea.