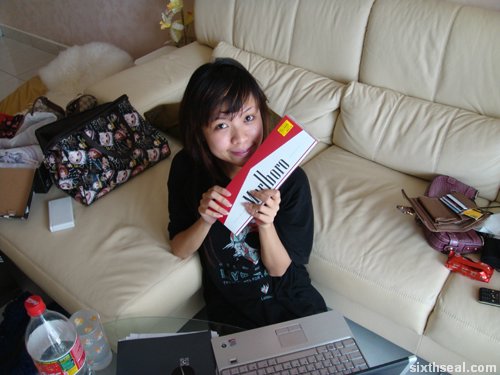 I dropped by Cheesie’s condo earlier this morning to pick up the carton of Marlboros that she had gotten for me duty free during her recent trip to Shanghai. It’s the first time I’ve been to her place and it’s a really nice condominium unit with great security. I’m thinking of getting one myself once my paycheck stabilizes – it’s just about what you would pay for rent, except you get to own the property at the end. 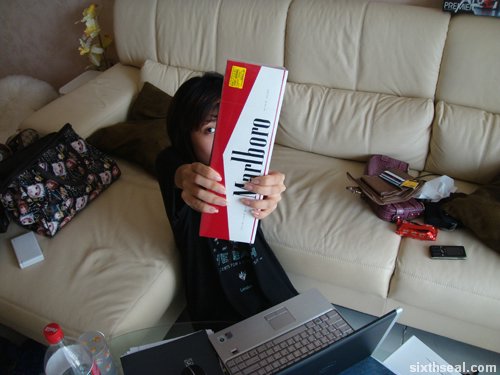 A big thank you goes out to Ringo, who has kindly contributed to my chances of getting lung cancer. 😉

Kidding. I less than 3 you. 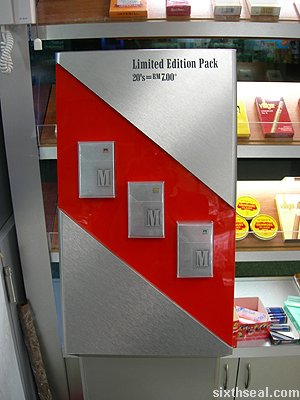 Marlboro came out with a Limited Edition Zippo style pack for all three of their product lines – Marlboro, Marlboro Menthol and Marlboro Lights. It comes in a sleek silver pack instead of the usual flip-top box, and it opens like a Zippo. The packs have a minimalist yet elegant design with mostly silver tints with the Marlboro logo and the words “Special Edition”. 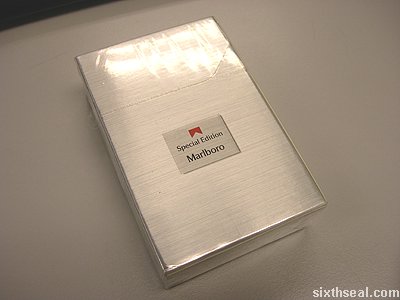 I managed to snag a couple of packs of the Marlboro and Marlboro Menthol packs when I was in KL. The places I went to all ran out of the limited edition Zippo style Marlboro Lights packs. I figured I would complete the collection in Sarawak, but alas, weeks have passed and there’s no sign of the limited edition Zippo style packs here. It seems that the product test market is in KL. 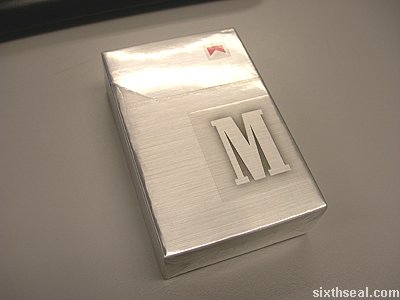 This is the front of the Marlboro Special Edition pack – it is dominated by silver with gradients into monotone at the side encasing the letter “M“. The top part of the box has the Marlboro logo on it (without the text) and is color coded e.g. Marlboro has a red imprint, Marlboro Menthol has a green one and Marlboro Lights is embossed with a yellow logo. It is all done very elegantly, sleek is the word of the day here… 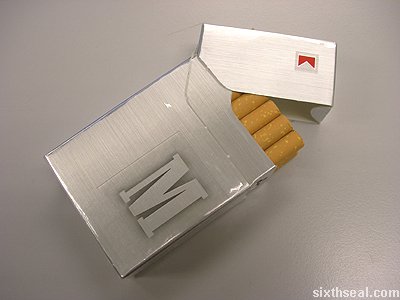 However, the most interesting thing about the Marlboro Special Edition packs is the opening mechanism. It opens up like a Zippo (the lighter) to reveal two separate foil wrappers enfolding 10 cigarettes each. This preserves the freshness of the cigarette as it can be opened separately. The other noteworthy bit is the sealing mechanism – there is an indentation at the side (squint to see detail) which the semi-circle on the top of the pack goes into to “lock” the pack. 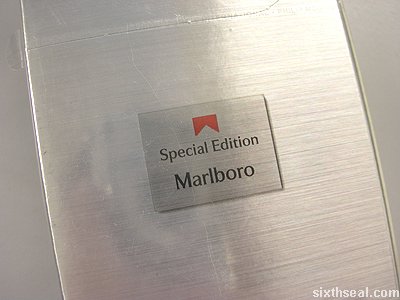 The Marlboro Special Edition Zippo style pack is a great branding experiment in marketing Marlboro as an ultra premium cigarette. The design is impeccable and the elegant color scheme and features makes this one of the best Marlboro limited edition packs to come out in recent memory. Philip Morris moves away from the traditional “Marlboro Man” style design and did a total facelift to repackage Marlboro as an elegant and sleek cigarette. 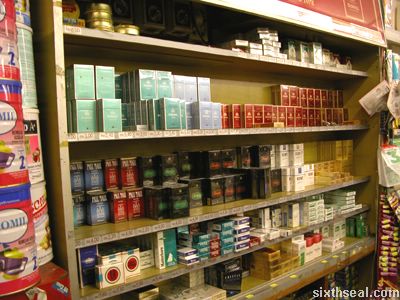 Here are photos with accompanying commentary of the common brands of cigarettes in Malaysia: 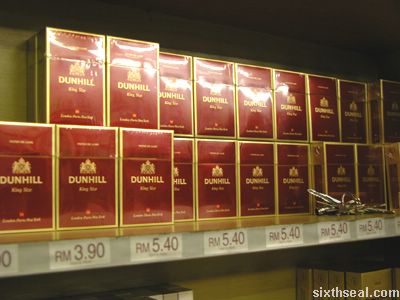 This is the most popular brand here, according to my friends who’re
in the tobacco sales industry. I don’t like the taste – it seems to
have less tar than Marlboros, which produces a less than smooth draw
when inhaled. Dunhill is supposed to have the highest nicotine content
amongst all the cigarette brands, but that is just word on the street,
not based on any quantitative analysis. 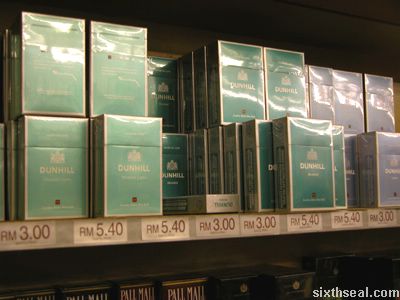 It is available in Menthol, Menthol Lights and Lights too. It is
said that menthol cigarettes causes infertility but IMHO, that’s just a
joke passed around. 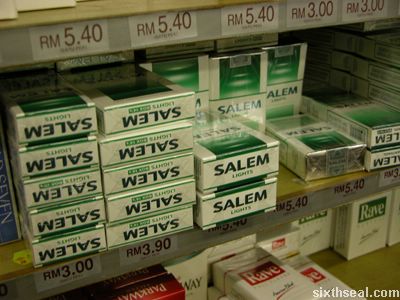 This is probably the most popular menthol cigarette here. I remember
bringing some Salem cigarettes to Christchurch, NZ for my Kiwi friends
to try and most of them choked on the first inhale. Heh. Salem + winter
= cough, cough. Matterhorn is even stronger in that aspect. 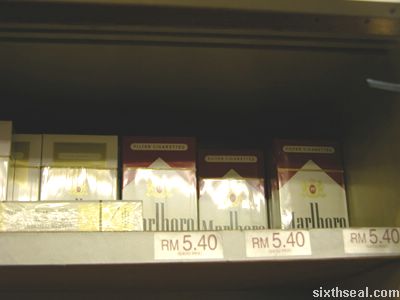 My personal favorite when I used to smoke. I started smoking when I
was 15 or 16, couldn’t remember. I would only smoke Marlboro reds in
the flip-top boxes. I can’t stand the soft packs, they always get
squashed somehow. Marlboros have a smooth, consistent draw – it tastes
great, which is more than I can say for other brands. Very versatile
too, just pop a Hacks sweet before lighting up and *poof* instant
menthol Marlboros. I read somewhere that Marlboros deliver nicotine
more quickly (they called it “crack/freebase nicotine”) so smokers get
a faster reward delivery system. I liken Marlboros to a chocolate taste
when inhaled…and just like chocolates, you can’t just have one. Best
one is the first one (or two) in the morning. =D 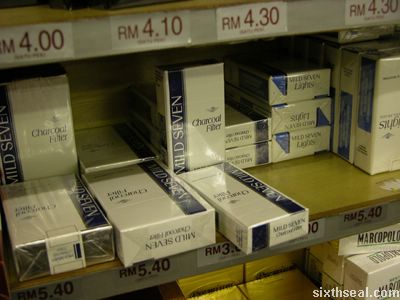 This is another popular brand. It tastes okay, it would probably be
the brand I’ll switch to in the unlikely event that Philip Morris folds
and discontinues Marlboros. I remember my Taiwanese friends preferring
this brand. They have this habit of opening up the soft pack, taking
one cigarette out, and putting it back in upside down. That cigarette
is known as “shu yuen yen” or “wishing cigarette” and it would be the
very last one from the pack to be smoked. It is said that making a wish
while lighting up that one would fulfill that wish. Smoker’s etiquette
dictates that you should NEVER smoke the last cigarette in someone
else’s pack. This applies more strongly for those who keep a “shu yuen
yen”, you shouldn’t ever smoke it. I once accidentally took that one
from a half full pack (it’s upside down, so it should be clearly
visible) and smoked it and was reprimanded for my transgression. That
upside down cigarette is meant for the owner of the pack. 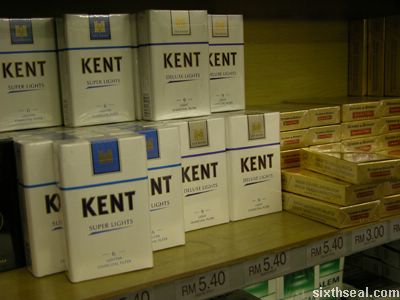 My late paternal grandfather (may he rest in peace) used to smoke
this brand. He used to keep cartons of it – he smoked about two packs a
day. He died of cancer, just like my maternal grandfather (lung
cancer). I have always been told that our family has a predisposition
to cancer and that I shouldn’t smoke, since both of my grandfathers
died from smoking related complications. Cigarette smoke is a
carcinogen, if you have been living under a barrel, and didn’t already
know. 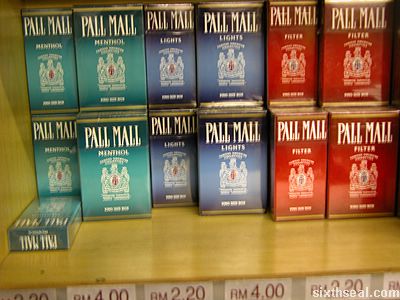 I never liked these. Yeah, I’ve tried most cigarette brands
(including unfiltered Camels and this multi-colored cigarettes called
Sorreno or something) before deciding that Marlboros are my favorite
and brand loyalty stayed since then and I won’t smoke anything else
(unless I’m out, that is). Pall Mall sounds so grim…think “pallor” and “pall bearer”. 😉 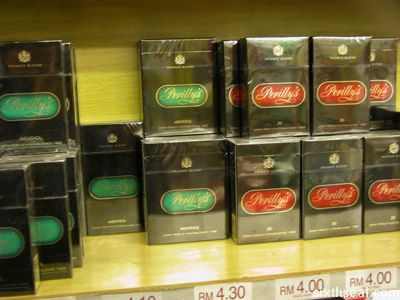 To be honest, this tastes disgusting to me. It doesn’t sound all
that good either. You can’t spell “Perilly’s” without “Peril”. Heh. 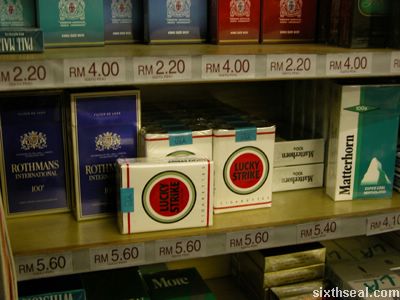 It’s not popular here. It’s alright, the taste is pretty good once
in a while, but then again I’ve always been a Marlboro smoker after the
initial experimentation with brands, so I can’t comment. It’s a
strange, acquired taste, Lucky Strikes. 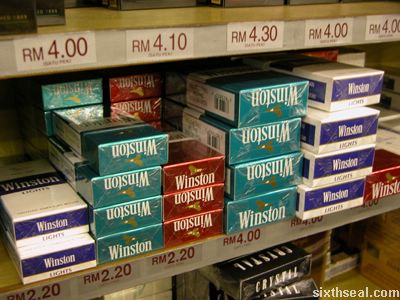 I don’t know anyone who likes these. 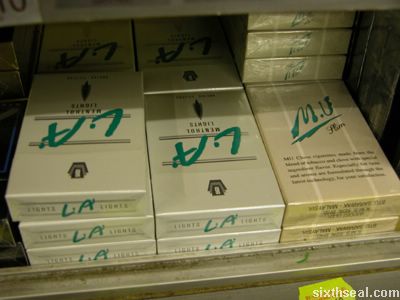 It’s an ultra slim cigarette, called “geh boh hong ki” (prostitute’s
cigarettes) over here. The etymology of this word apparently stems from
the popularity of this brand amongst working ladies in Miri. 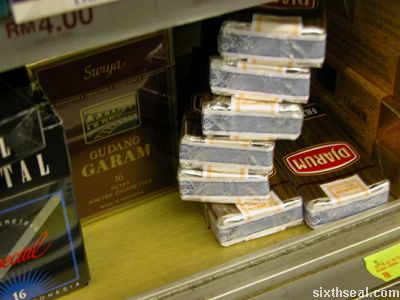 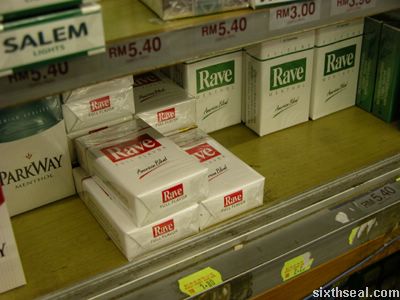 This is very popular amongst blue collar (low income bracket)
smokers. It’s cheap. When it first came out, I was given a sample (my
friend’s family owns a chain of grocery shops) and was told that it
tastes remarkably similar to Marlboros. I don’t know how he drew that
conclusion – this cigarette tastes completely different from Marlboros.

So, what brand of cigarette do you smoke? 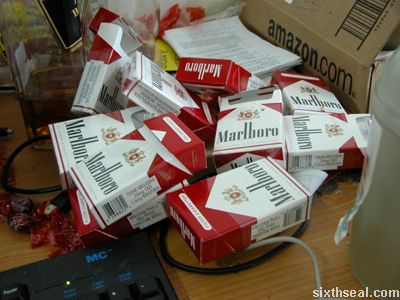 I don’t smoke, but my desk is strewn with empty Marlboro boxes. Go figure. *shrug*