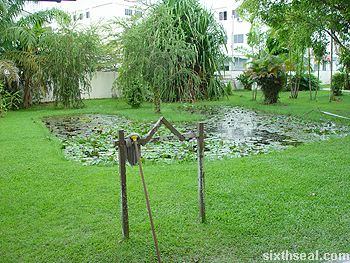 I will be leaving Sibu for KL this Sunday. There’s nothing
noteworthy to report today except that things are starting to fall into
place and preparations are basically done. I’ve opened a new bank
account with Public Bank, they issue ATM cards on the spot (during
application), which is interesting because I figured there would be a
wait. They also have an online banking system, which is useful for
paying bills. Anyway, I thought there would be a hassle involved since
I had an account with Public Bank a couple of years ago (which was
never closed) but they were not concerned about that. Now, I’ve just
got to get some funds out of a Fixed Deposit account I have in another
bank and transfer it into this account. My MyKad application has not
been successful, the place is absolutely packed every time I go in, so
I’ve decided to take advantage of the 2005 deadline and do it next time
I come back. 🙂

Oh, apparently there is a lorry loaded with new mattresses driving
around the Medan Damansara area where you can buy the bulky things off
them or trade in an old mattress for a rebate of some sort. I hear it
doesn’t come at the frequency of gas and newspaper distribution
vehicles, but it’s pretty close. What an interesting concept, I’ve
never even heard of this before!