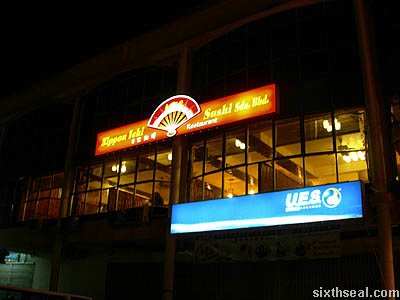 Nippon Ichi Sushi Sdn. Bhd. Restaurant is the latest Japanese restaurant in Sibu. It also holds the dubious distinction of being the first to have “Private Limited (Sdn. Bhd.)” as part of the eating establishment’s name. 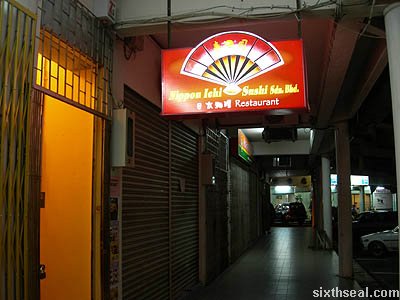 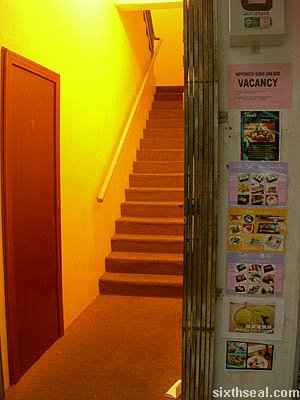 The staircase leading up to Nippon Ichi Sushi restaurant has a vacancy notice as well as the various Japanese fare available at the restaurant in printed, full color photos adorning the otherwise dull staircase. 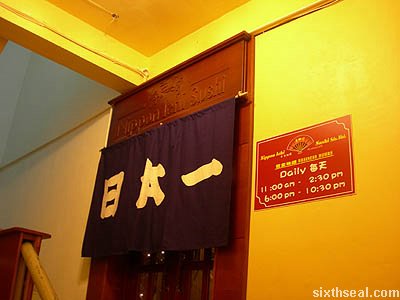 Nippon Ichi Sushi has its entrance proper at the second floor, complete with wood paneling and etched signboards as well as the traditional Japanese cloth hanging on the doorway. The business hours are also listed in a small notice to the side. 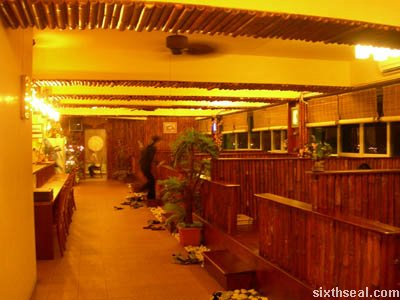 The interior of Nippon Ichi Sushi is filled with new age tatami style dining enclaves, with each area partially cordoned off for privacy. There are approximately six tatami areas, which constitutes the main seating arrangements of the eating establishment. 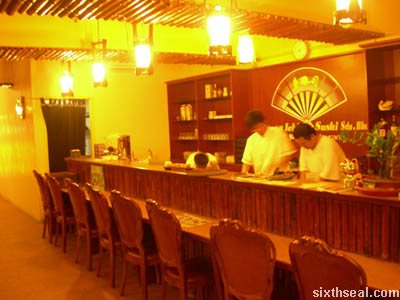 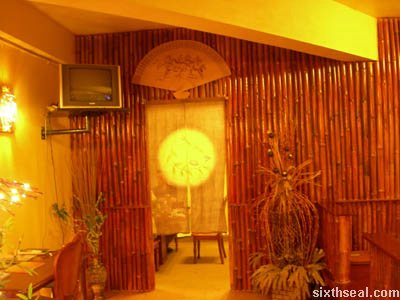 …as well as a VIP dining room which was occupied when I went there for dinner just now. 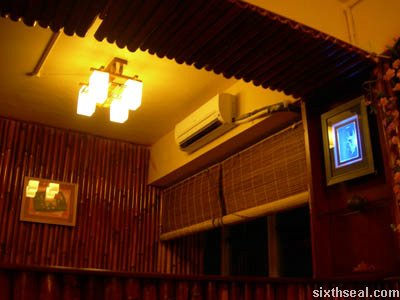 The tatami dining concept is unique as each tatami dining unit has its own air conditioning and lighting, with a view though the glass paneled walls. There isn’t much of a view to speak of, but I like the cellular nature of the tatami units. 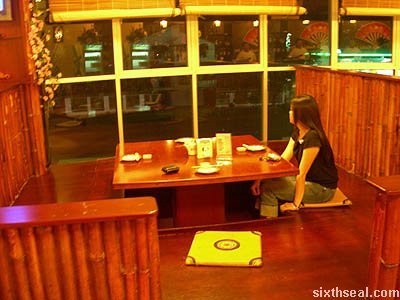 Nippon Ichi Sushi doesn’t really have tatami mats for dining (thus the new age comment above) but rather tatami style seating arrangements with flat pillows for seats and a dug out (recessed pit) for you to put your legs in, so you don’t actually need to learn the ways of the Japanese tatami seating kung fu (which will cause leg cramps). 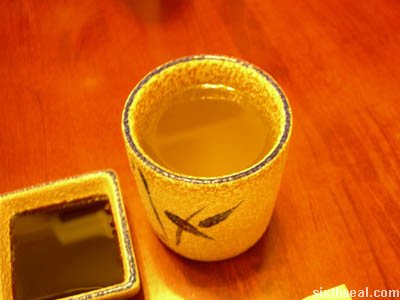 The waitress will serve green tea (RM 2) as the default drink upon arrival, which is refillable (unlimited refills). 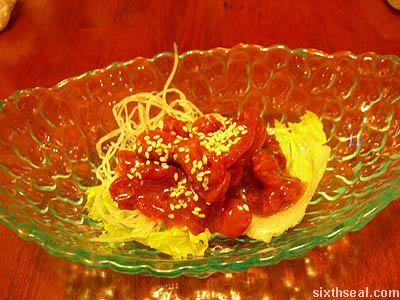 This is Idako Sashimi (RM 6) which is baby octopus with sesame seeds. We had this for the appetizer, as recommended by the waitress. 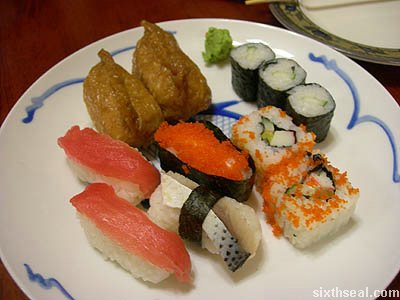 It is Sushi Day at Nippon Ichi Sushi so we has the Nigiri Sushi (RM 18) which is basically a sampler of sushi with tuna, salmon, swordfish, ebiko and several other sushi and maki items. 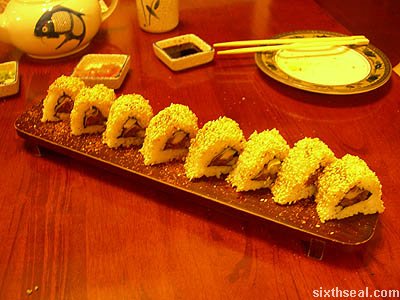 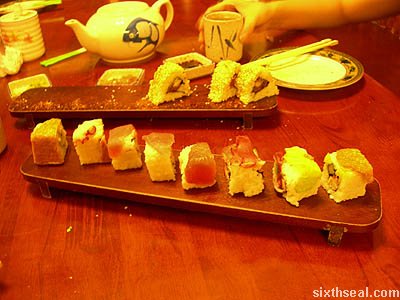 We also had the Rainbow Maki (RM 13) which is a sampler of maki with octopus, yellowtail, tuna and fusions of sashimi cuts. 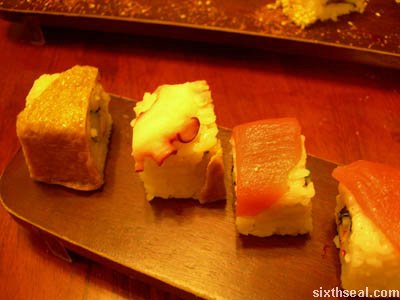 It truly earned its name as the Rainbow Maki… 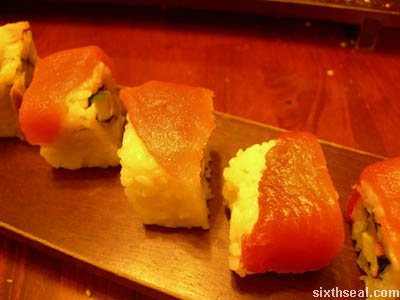 …with the colors and ingredients… 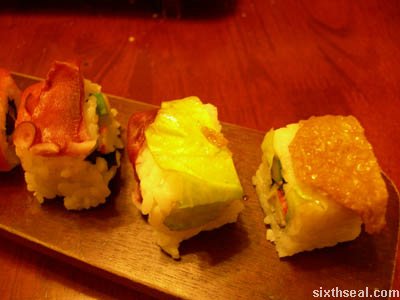 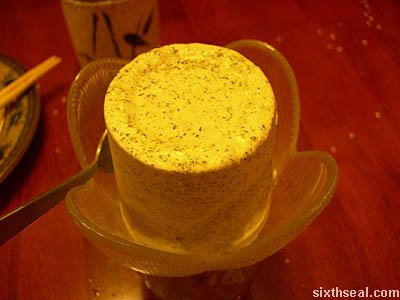 The dessert came in the form of Macha Ice Cream (RM 8) which is green tea ice cream. This is the best dish from the entire night and it probably came out of a small ice cream tub with “Made in Japan” stamped on it. 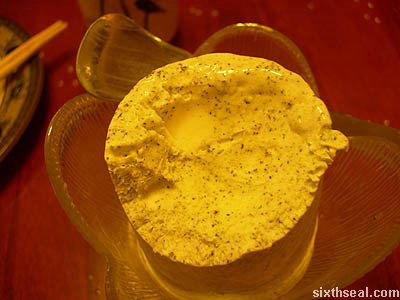 Still, it’s great macha ice cream…not sweet at all, with hints of tea coming from the small granules hidden throughout the ice cream. 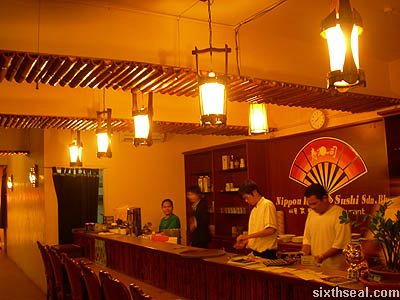 Nippon Ichi Sushi disappointed me with their mediocre Japanese fare and it wasn’t until I paid the bill (RM 74.48) that I realized why – the waitress told me that the sushi chef was on leave and a junior apprentice took his place! 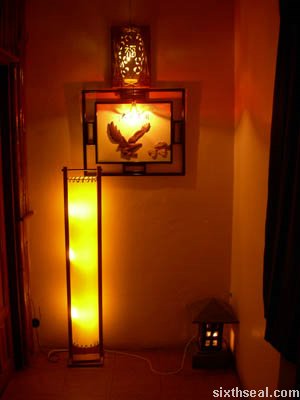 Nippon Ichi Sushi has great macha ice cream (and amazing decor) and I like the tatami dining concept, but I cannot recommend the place with good conscience due to its mediocre sushi. I would have to check out the place again when the sushi chef is back, but allowing a junior apprentice to serve food without warning patrons in advance is simply unacceptable for a place of its stature.

It gets a rare two thumbs down from me.