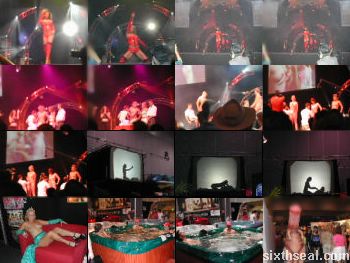 This site got a mention in the official Sexpo site! My coverage of the event (SEXPO 2002, Melbourne) is listed in the “All about Sexpo” news page
[sexpo.com.au]. You’ll notice that there is a comment from David Ross,
the promoter for Sexpo. He emailed me after that and told me that I was
eligible to apply for a Media Pass, which would make taking photos
easier (people without media passes are not supposed to take stage
performance photos). Anyway, if there’s anyone in Australia, keep that
in mind if you’re going to attend the expo and take photos – enquire
about a Media Pass. 🙂 Thanks for the link!

On a somewhat related note, I discovered this great snack site for
people who appreciate food in my referral logs. I surfed over to find
that the Snackspot admin had linked one of my Magnum Sixties Nine reviews
[snackspot.org]. Thanks! Well, I shamelessly mentioned my post which
has all 9 reviews of the series, as you can see in the comments. Now,
what really made my day was the comment later on from “Astounded” who
said:

Just a side note – a few posts up this page there is a post from
“HB”. Check out his site – he has really thrown down the gauntlet to
Snackspot. He reviews sweets AND recreational drugs!!! And he appears
to come from a country (Malaysia) where possession of illicit narcotics
carries the death penalty!!!!

I really appreciate that, it totally made my day. Thank you “Astounded”! 🙂

This
[sanlive.com] post is a really interesting one, the questions make the
answers an intriguing read. It would really be great if everyone can
answer these questions honestly in their own weblog. Here’s mine:

When and why did you start your daily reads list?
I can’t remember when, I had a “Links” page in my old HTML blog, but
those were mainly links to webpages and not blogs. The “daily reads”
(or “Blogs” in my case) was implemented after the move to Movable Type.
I started it partly to make easier navigation possible (the “Favorites”
drop down menu gets cluttered after a while) and partly to reciprocate
links.

Do you truly visit your daily reads DAILY?
Yes, unless I’m away or otherwise engaged. I don’t visit every blog
daily though, the ones that are frequently updated or which I like I
are clicked on daily, others less frequently. But the vast majority of
the links in my “Blogs” section are read daily.

Why do you add these people as your daily reads?
It could be one of many reasons – you’re one of my personal friends, I
like your blog/writing/personality, it’s a reciprocal link, you’re one
of the people who inspired me to start blogging or because you’re a
fellow Sarawakian. 😉 By the way, that last one is what would make me
link someone, NOT someone on my current “Blogs” list.

How many people are on your daily reads?
There are 18 people in the “Blogs” section as of today.

Have you deleted people from your daily reads, if so why?
Yes. There was the cut and paste disaster
(Note to self: Backup frequently) which made some people unaccounted
for, but most of that has been rectified. I’ve also been asked to
remove links because of my site’s emphasis on drugs, which was not
appreciated by either the blog author or people related to the blog
author. I don’t blame anyone for that, I’m truly sorry that a link from
my “recreational drug use friendly” site caused trouble for the people
involved.

I’ve also deleted people accidentally – the most recent being
Felicia. Oops! Making changes to the blog + generous amounts of alcohol
+ no backups = “Hey, one of my daily reads is missing!”. The Nazi Link Policy
(which has since been removed) also states that I delete blogs on
hiatus and password protected ones. Otherwise (bar accidents while
updating in a lack of sobriety) links do not get deleted unless it’s
one of the reasons above.

Do you comment on your daily reads DAILY?
No, I read them, but I don’t always comment unless I’ve something to
say. I will admit that I am susceptible to the “reciprocal comment”
syndrome though. :p You know what I’m talking about, someone comments
on your blog, you comment back aka “I’ll rub your back if you rub
mine”. 😉 In my case, that is due to either guilt or a lack of time.

How often do you modify your daily reads?
Not often at all. It takes time to recompile a Movable Type blog. I
know that only the front page needs to be recompiled, but I have this
OCD thing where I need to recompile the WHOLE site, and that takes
longer and longer as the site grows. :p I did move some personal
friends into “Personal Websites” though because the site doesn’t really
qualify as a blog due to a lack of updates, but I still want to link to
them, because they’re my real life friends. 🙂

Do you link people on your daily reads only because they linked you?
Guilt does pay a role in this, but my pastor told me guilt is just a
manifestation of Satan’s plan of deception and my dad always told me to
listen to the pastor. 😉 Seriously though, there is a lack of space, or
rather time, since “Blogs” are the people who I read daily. I don’t
want to be a “link farm”, just linking people for the sake of getting
reciprocals or reciprocating reciprocals, but chances are, if you link
me, I’ll find out sooner or later and you’ll inevitably get into the
“Blogs” list coz it’s like real life, hang out with a person long
enough, and he/she will become personal friends and you’ll hang out
(read) them daily.

Does daily reads have special meaning to you?
Yes. sixthseal.com is not a link farm. 😉

What do you get from reading your daily reads?
A peek into the daily life of someone interesting. Also, some blogs
have intellectually stimulating content which makes me think.

Are you likely to read LONG blog entries from your daily reads?
Yeah. However, if I’m strapped for time, I would only read long entries if they are interesting or well structured and written.

Do you expect your daily reads to read your blog everyday in return?
I don’t expect anything. I don’t want anyone to feel obliged to read my
blog, I’ll much rather have people read it because they want to or
because the content interests them.

Who on your daily reads has the coolest name?
Lye Cwan. 🙂 I like her name. She’s AlCee in the “Blogs” section.

Who on your daily reads has the coolest layouts?
I like Hilmy’s layout. He draws as well.

Who on your daily reads is most likely to comment in your blog?
I can’t really tell unless I write a script and I’m supposed to be
working on the photo story now, which would have to be postponed till
tomorrow because I spent all my time on this. :p You should too, it’ll
be great if everyone can answer this set of questions honestly.

How many people on your daily reads are your friends in “real life”?
None. I’ve known the people in “Personal Webpages” for years though.

Who is the most intelligent or insightful person?
Xiu. Her posts make me think.

Who is the least favorite/most annoying person on your daily reads?
Jia Hui. 🙂 I did not like her at first (and I told her in an email or
comment too, if memory serves) because her posts made her seem
arrogant, elitist and snobbish. That was a long time ago though, and in
my infrequent surfing around and stumbling onto her blog, her writing
style grew on me and I realized that she wasn’t that way at all. 🙂 It
was just me who was quick to make judgements based on someone’s blog
entry. I have read her frequently after one of her posts made me
realize that my first assumptions was wrong and I have read her ever
since.

Another person who falls into this category is Grace (graceshu), she
also seemed arrogant and sarcastic from her posts and but again, that’s
another wrong assumption. I’ve known her better since and she’s a
really nice person.

Who is most likely to give you news about the world or internet?
Xiu again.

Have you ever wanted to meet people on your daily reads?
Yes, it would be great to have a big blog meetup. 🙂

Who do you admire the most?
Grace (graceux5) because her posts tend to be happy, and that cheers me
up too. Wena (mum-mum) with her photos of food. Grace (graceshu) with
her photo stories. Hilmy (Hilmyworks) because of his artwork.

Who has an attitude problem?
I answered this in “Who is the least favorite/most annoying person on your daily reads?”. 😉

Who is the funniest?
Everyone has their moments but none of the blogs are full fledged humor/satire/parody blogs.

Who is the sweetest?
Literally? mum-mum is a food blog. 🙂

Who is the most out-going?
minishorts has a lot of personal posts, that takes courage.

Whom can you trust the most?
You’ll know if you know. The people in “Personal Websites”. If I had to
choose from “Blogs”, I would say graceshu. Xiu is also a confidante.

Whom do you know the best?
The people in “Personal Websites”, I’ve known them for years!

Whom do you talk to most online?
Claire (minishorts), Grace (graceshu), Wena (mum-mum) are the top three.

Who is the lastest daily reads you added?
Jikon Lai. I like him.

Whose blog do you wish to drool all over on?
Jasmine. She was the first one to link me back in the old days of my HTML-only blog sans comments.

Whose blog do you enjoy reading the most?
I like to read them all, they’re daily reads.

You are least likely to comment on which blog(s)?
That would probably be unsung, although I do read him.