Note: I haven’t fallen into “The Zone” while writing for a long time. Feels good to be back. Please read the story.

Hmm…I feel contented coz today was quite productive by my
standards, which unfortunately, is not high at all. =D I did get chewed
on a bit today by my IE supervisor though. It’s understandable coz our
group seems to be rather behind schedule. There was a semantics issue
involved as well. I had assumed that a non-reply will default to the
affirmative regarding meeting times, but apparently that was not the
case. Well, you know what they say about assuming. I can’t resist
reiterating though, assuming makes and ass out of u and me. There.
Anyway, I was grilled for a while about PHP syntax too. Felt like I was
back in graded school. Heh. Oh, which reminds me. Back in primary
school, we had this Nazi math teacher who would force us to memorize
the multiplication tables up to 13. Now, every time she comes in,
she’ll carry this big ass rattan (flexible wood-like plant) cane and
swish it around a bit. Then, she’ll start to traverse the tables and
rows, asking each one a random multiplication. She’ll give you 1
second, and 1 second the most. If you couldn’t answer correctly by
then, she’ll give you a hard lashing with the cane.

So down she’ll go, asking “What’s 3 times 12?” “What’s 7 times 13?”
“What’s 11 times 10?”. Now, each day, she’ll add one lashing to the
punishment for the wayward ones who couldn’t figure out the
multiplication tables in the head (no tables are allowed). This went on
until the punishment was 50 lashings (!) on the 50th day. She promised
that the counter will reset itself to 1 the next day. I’m not kidding,
this really is true. Note though that capital punishment was acceptable
in Malaysia when I was in primary school. Anyway, I could answer
everyday, right up until the dreaded 50th day. Many of my classmates
has conveniently brought a tube of Colgate toothpaste, which is said to
numb the hands so the lashings won’t hurt so much. Well, the guy in
front of me, an Iban, didn’t get the answer right, so the teacher
started to give him 50 lashes. Right around the 35th lash point, the
cane splintered and frayed, but the teacher kept on going. Well,
besides being not good with multiplications, the Iban guy was
unfortunately not good in acting too. He was smiling after the rattan
cane frayed, because rattan canes don’t hurt much once they’ve frayed.
This is because the kinetic force applied to the cane distributes
through each fray, which then lands on a larger surface area.

Unfortunate. The teacher started to realize this and started
slapping the guy instead, substituting each lash with a slap until the
prescribed 50 were up. The poor guy started crying (we were 12 years
old at that time) and the whole class was in a quandary regarding this
new development. The Colgate Method TM has effectively been
nulled, voided and stamped with a big red NOT APPLICABLE, sorry mate.
Anyway, once the slapping has been dealt with, the teacher moved to the
first girl in my row. We were (rather ruthlessly) hoping that the next
few people will “get it” too, since the bell was 10 minutes away from
ringing. Inferring and extrapolating shows that the teacher can produce
30 slaps per minute (SPM). 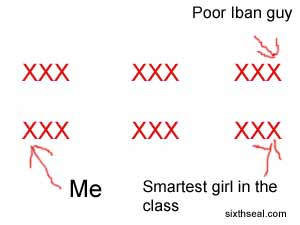 Thus, if 5 people in the row of 9 “gets it”, I would be spared from
any questions, since the bell would have already rung. I think we
learnt more math by trying to avoid a spanking than memorizing
multiplication tables. Unfortunately, the next girl was the smartest
girl in our class, so she instantly got the answer right. We were
momentarily elated for a couple of seconds, when the teacher fired off
3 more questions in quick succession, as if wanting to get the girl to
slip up. Unfazed, the smart girl answered all of them with impunity.
And thus it went, until it was the turn of the guy beside me. The clock
still had 7 minutes to go at the time, so I was about to resign to my
fate…until I thought of a trump card. Of course! I’ll go to the
toilet. So,

[Teacher, can I go to the toilet? I have a stomachache…(which was
only half untrue – who wouldn’t get a stomachache with this kind of
pressure?)]

[Of course not…it’s nearly your turn to go. Are you trying to get away?]

And thus, it was my turn. “What is 7 times 9?” said the teacher.
“Er…62?” said I. 7’s were always my weakest multiplication tables.
“SALAH!!!” boomed the teacher with delight, glad for an opportunity to
flex her muscles once more. Salah means wrong in Bahasa Malaysia if you
haven’t figured it out by now. I had never gotten the multiplication
tables wrong before. I could hear a sigh of relief from the row behind
me. Infidels. The teacher made me stand up and started giving me a
slap. However, she apparently could not bring herself to do it a second
time and contented herself with giving my cheeks a hard pinch. “Huai
Bin” the teacher said. “Jangan salah lagi, ah, kamu budak pandai”.
(Don’t make any more mistakes, you’re a clever kid).