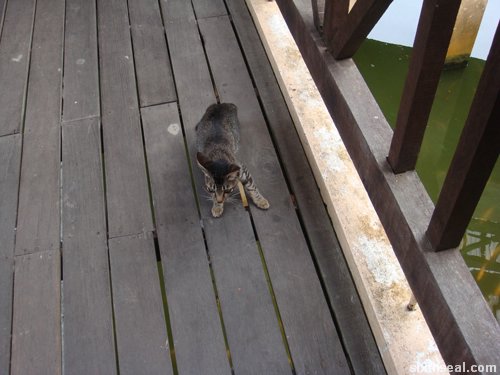 …and now I’m saving all my loving for someone who’s loving me.
So now go, walk out the door
Just turn around now, you’re not welcome anymore.

Disclaimer: The person I am talking about in this post has never been
featured on sixthseal.com – long readers would know that I don’t post
about my serious relationships on the blog.

Well, it looks like my availability status has changed again. I just got out of a roller coaster relationship and I’m not sure how I’m feeling right now. I was smoking (tobacco, mind you, not cannabis) alone in contemplation just now and felt the need to write a long, self-pitying post – all the feelings of anger, betrayal, disappointment rolled into one huge pity party.

Well, here at sixthseal.com, we don’t have pity parties. It’s just not on. We don’t sell that shit over here. 😉

I met this girl who seemed to be the perfect match for me (except for her availability status – don’t ask) about four months ago. I had just got out of rehab and realized that I have a weakness for girls like this – bad girls who’re friendly (sounds like an oxymoron, I know) and talkative. She’s Aries too, and that’s kinda like a double whammy coz I tend to gravitate towards Arians, being one myself.

I didn’t like her at first, to be honest. I just wanted to get into her pant(ie)s. I met her at a club and got her number but I promptly forgot about her until two days later. I called her up and we went out for drinks and ended up talking for four hours (shocking, I know).

We decided to meet each other for lunch the next day and I was totally put off by her. I won’t elaborate more lest people manage to identify the person I’m talking about. I just wasn’t interested anymore but due to loneliness (it’s kinda hard, being new in a company and having no one to have lunch with) I went out with her again, and again, and again.

…and you know what, she kinda grew on me. She had qualities that made her attractive and she made me feel comfortable in the relationship.

Anyway, we started hanging out exclusively and it was good for a while until I noticed…discrepancies, shall we say. There’s a lot of deceit in the relationship. I won’t elaborate but let’s just say that I’m not the only one she’s seeing. Every time we get into an argument (fire elements like Aries are not meant to be together) she runs off to her ex-boyfriend.

I won’t call him her ex-boyfriend per se…it’s more like an on and off thing and she seems to have a history of doing that shit all the time in her past relationships.

I’ll be the first to state publicly that I’m not into character assassination and I truly believe that she’s a nice person (honestly) if you don’t mind…er, sharing her, if you catch my drift. 😉

Anyway, the thing that set things off today was a long standing issue between the both of us. I knew I couldn’t get a truly exclusive relationship with her, and I’m okay with that coz I’m not planning to marry her anyway. She’s fun to hang out with and she’s a good friend.

What I cannot stand is the deceit. It’s perfectly fine with me if she tells me she’ll be going to be seeing her ex (other?) boyfriend. It’s NOT okay if she lies about it. It’s the lying more than anything coz I sincerely believe that without trust in a relationship, there’s nothing.

Trust is the foundation that all relationships stand on.

Thus, I have decided to break up with her. Honestly, I thought I would be feeling down and everything, but I’m not. I thought I’ll be writing stuff like “Oh well, at least I have alprazolam to get me through this” or “I’ve successfully kicked a 7 year benzodiazepine habit and I’ll be fucked if I can’t kick a 4 month relationship” but I’m feeling perfectly fine.

It’s the official sixthseal.com policy to not have pity parties.

We just don’t do that shit around here. 🙂

This is for you HH:

I hope life treats you kind…and I hope you have all you’ve dreamed of.
And I wish you joy, and happiness.
But above all this, I wish you…love.