I’ll be off to Mukah [moeswk.gov.my] tomorrow with a couple of
my buddies. Mukah is a small coastal township upstream from Sibu. There is a beach there,
although it’s too polluted to swim in. I’ll be back on Sunday, going to stay there for the
night. I haven’t been there since I was really young, so it’ll be nice to go there for some
sago and umai
[geocities.com]. We went to get the tickets this afternoon, going to catch the 2:30 pm bus
tomorrow. 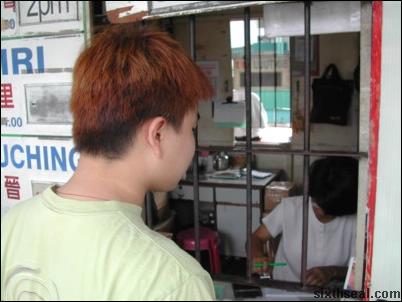 Getting the tickets at Sedaya bus terminal

Anyway, me and my girlfriend went out to get some ice cream tonight. As I was sending her back,
I felt a really bad stomachache coming on, the kind that produces watery feces. I insisted on going
back home instead of using her toilet, thinking I still had a bit of time. Unfortunately, it got
really bad as I left and I had half a mind to turn back, but since I was already halfway home, I
might as well attempt the whole run. Anyway, about 2 minutes later, I got hit with a really bad
URGE to go and I was seriously considering going right then and cleaning up the mess when I
get back. Heh. It was that bad. However, my sphincter was stronger than I thought, and that wave
soon passed. But soon, another wave came and in desperation, I floored the accelerator to try and
beat the last traffic lights, but it changed just as I got to the intersection. Woe! Luckily I
managed to get home okay and rushed upstairs. Ah…nothing beats reading Time in the toilet while
taking a dump.