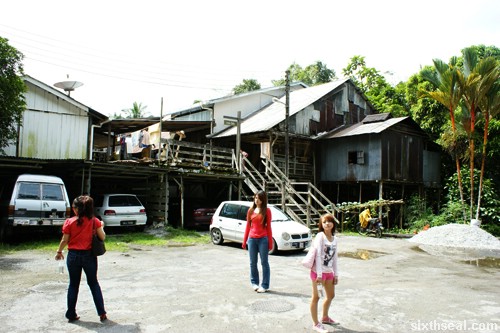 Last post from the Kuching Season 1 Project Alpha blogger trip! This time we headed to a longhouse in Annah Rais – I’m familiar with this area, there’s a hot spring in Annah Rais which took us ages to find last time we were there. Here I present to you Aud’s tulan face – she doesn’t take very kindly to people waking her up (or the sun either). >.< 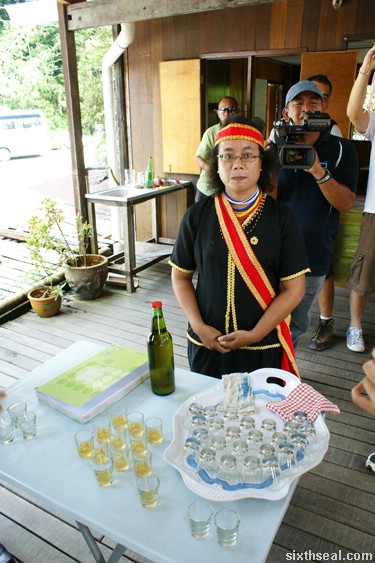 What do you do when you go to a longhouse? Why, my dear friends, you indulge in the hospitality of the local folks by drinking some tuak (rice wine). It’s also for sale for RM 10 per bottle. I drank most of the gratis tuak and bought a bottle so that everyone can have a taste and even lugged it to the bus (but finished it before I got to Kuching). 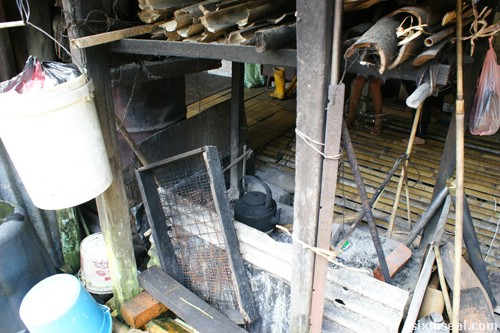 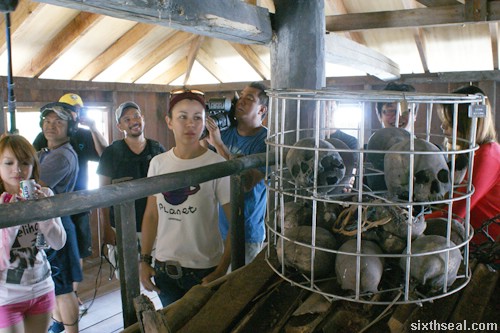 We Maoris, we once were warriors – headhunting and shit like that. 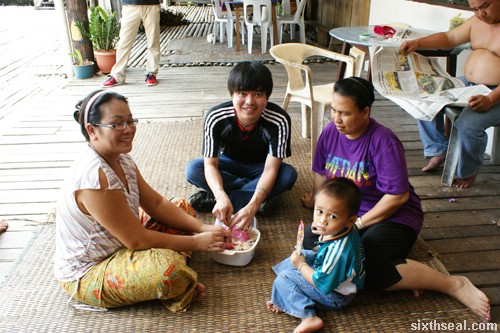 I met this lady who has a husband working for PDRM. I instantly sat down and helped her peel shrimps while talking with her, much to Aud’s amusement. She knows Inspector K, MK, Sargeant AD from Narcotics too! Good thing she didn’t ask me how I knew them. ;) 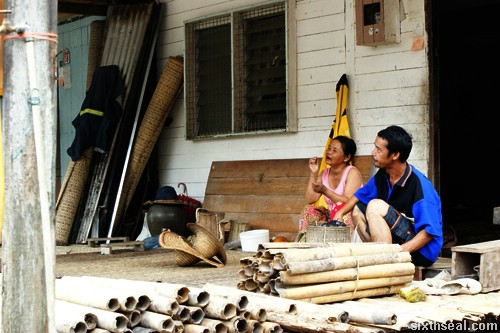 …and what longhouse visit would be complete without an old woman chewing betel nut? 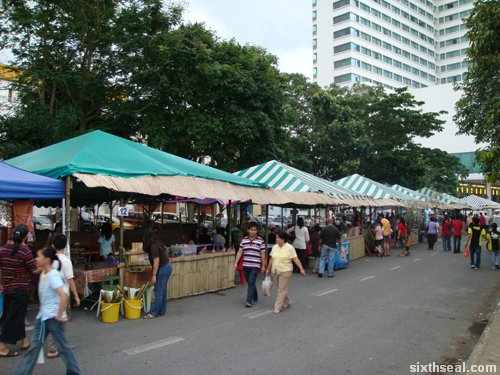 The BCF 2008 ended the Borneo Dayak Festival (BDF) with a tuak (local Iban rice wine) drinking competition, a finale highly (no pun intended) befitting the Dayak themed festival. The Dayak is a collective reference to a local ethnic group comprising of several subgroups of which the majority is Iban. 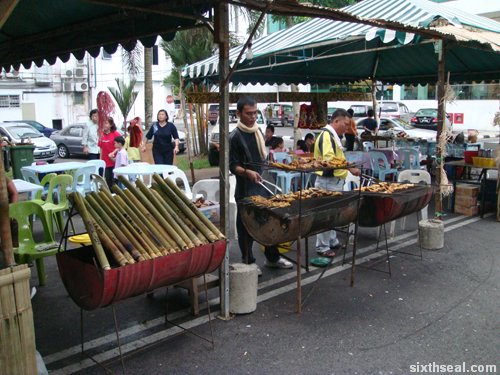 The Borneo Dayak Festival is centralized around a long row of food stalls bordering the BCF 2008 perimeter grounds. The food stalls offer a large variety of local delights including pansoh manok (bamboo cooked meat) and tuak. 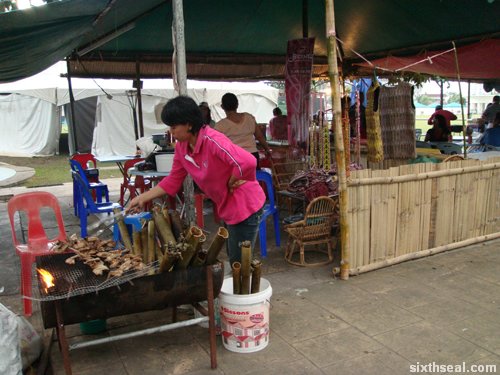 There are also stalls showcasing the native art of the Dayaks with their knitted tribal designs being the most popular. 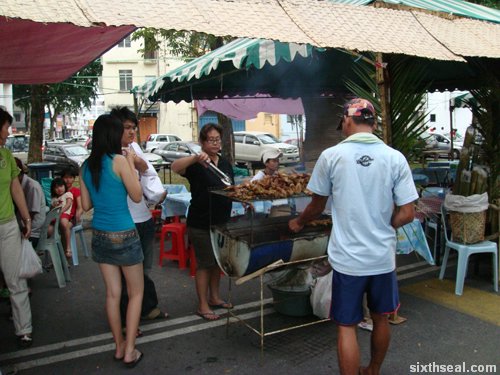 The shapely legs of the locals are also on display in certain stalls, though I suspect it’s not for sale. ;) 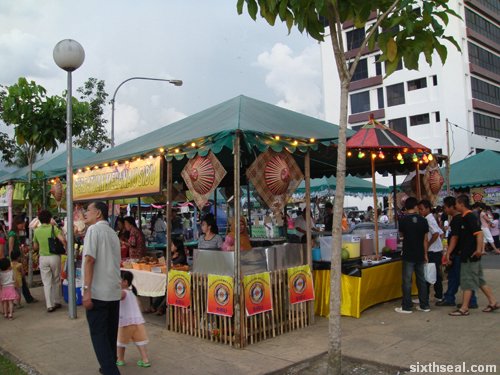 There are also a lot of stalls catering to the thirst of the crowd with local mixed drinks like air bandong (a popular concoction of rose syrup and evaporated milk), air jagung (corn drink, tastes better than it sounds) and coconut juice. 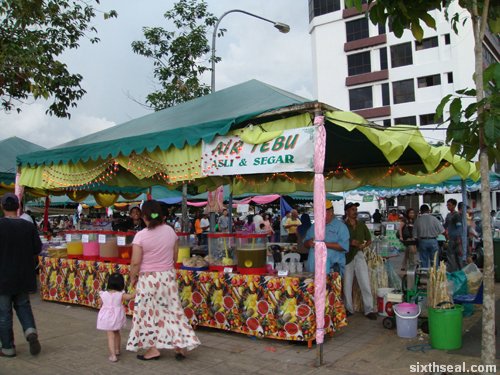 I came across a stall selling fresh sugarcane juice. Fresh sugarcane is made by using a pressure roller machine to extract the negligible moisture content from a sugarcane plant. It takes a lot of plants to make a single cup of the juice. 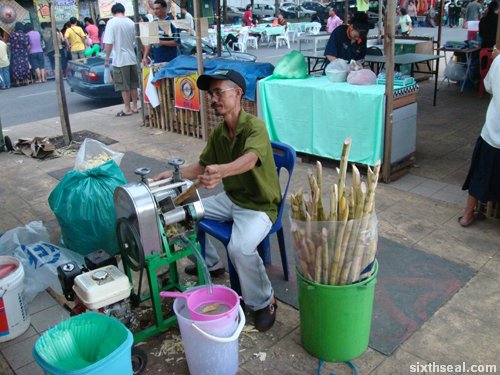 The sugarcane is first peeled and then inserted into this medieval looking machine with a hose that directs the juice down into a filter. 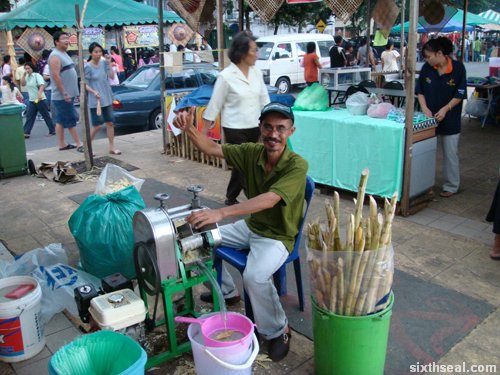 Careful Pakcik! The rollers are not friendly to human fingers! ;) 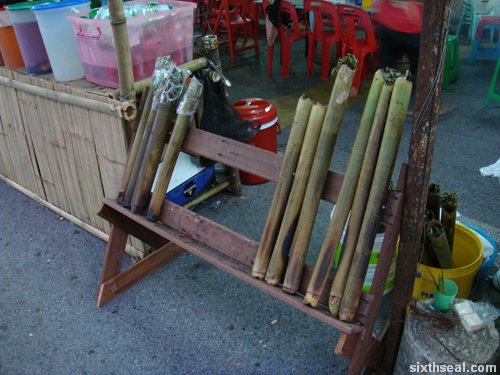 I would be remiss if I didn’t eat the pansoh manok (meat cooked in bamboo). It’s a local Iban delicacy where the meat is stuffed inside hollow bamboo plants and then cooked slowly over a charcoal fire. 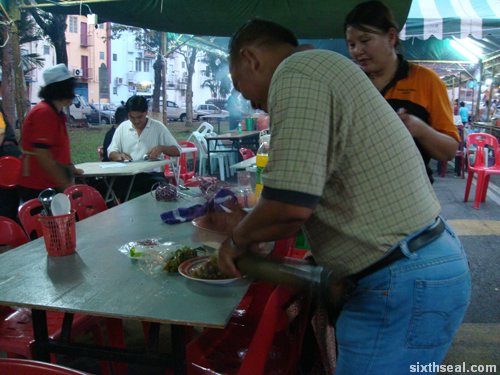 It is then unsealed by taking out the leaves stuffing one end and emptying the contents into a plate. There are plastic seating arrangements at the BCF 2008 for the food stalls. 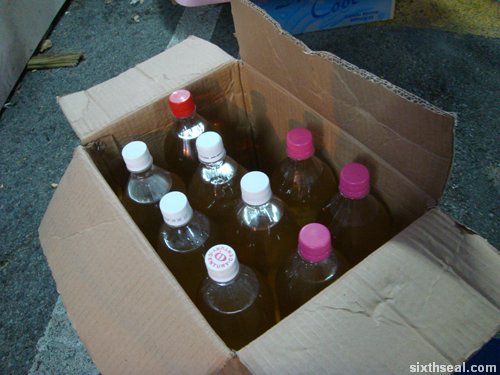 Of course, a meal of pansoh manok would be incomplete without the obligatory tuak (Iban rice wine). Tuak is made from fermented rice and it’s sold in 1.25 liter PET bottles that once contained 7Up or Coke for RM 10. ;) 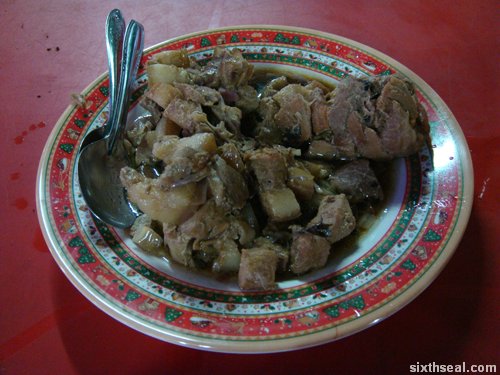 We had the pork pansoh manok (RM 15). There are three different types of pansoh manok in this stall – pork, chicken and fish. 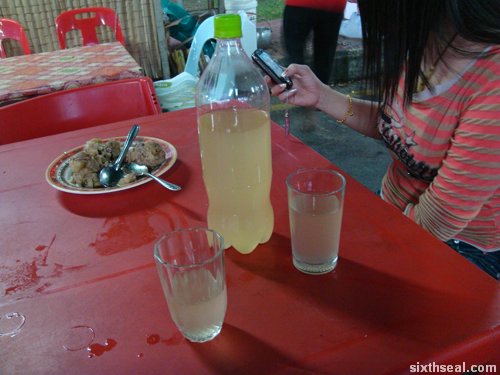 I was a little inebriated after drinking the 1.25 litre bottle of tuak. Tuak can contain anything from 9 – 14 % alcohol. There’s really no control in the fermentation process and some tuak is “fortified” with cheap distilled liquor for more oomph… 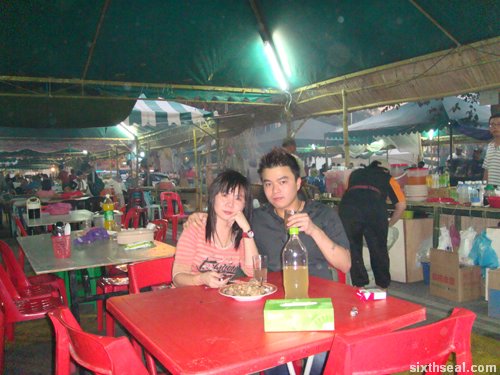 In fact, I was more than a little inebriated from the tuak. I went and played some carnival games after that and a video was taken of me that projects me in a less than complimentary light. More on that carnival games tomorrow – I’m going again tonight. :) 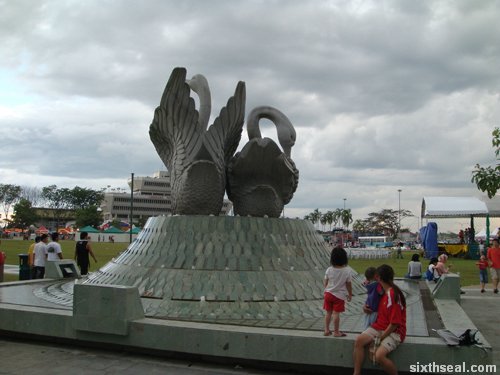