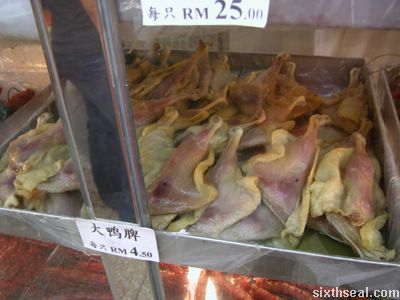 Waxed duck at a store display

Waxed duck, otherwise known as lup ngap (Cantonese) or lak yak
(Mandarin) is an oily, waxed meat. Lup and lak both mean “wax” in the
respective dialects although the romanization is different. I had
always thought it looked like plastic meat when I was younger and never
really had a chance to eat it. It’s a salty, preserved meat that needs
to be cooked (i.e. steamed) before serving. The seller mentioned that
it needed to be cooked before eating, but I was adamant at trying to
eat it raw and didn’t have much success: 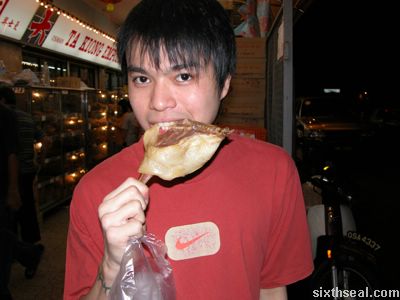 It was simply too tough to bite off that way. The skin of the duck
went through some unholy preservative measures that made it look waxy
and rendered it all but impossible to tear off with the canines without
softening it first. It retails for RM 4.50 per drumstick (including
thigh area) and the price increases as the size of the fowl increases,
up to RM 25.00 for a full bird (it’s duck). 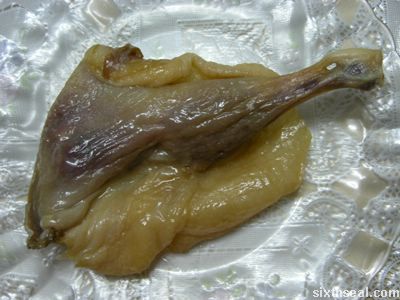 Anyway, the above is a photo I took at home while I prepared it for
steaming. There isn’t any fancy ingredients added – this is the
unadulterated experience, just the duck and nothing else, thank you
very much. 😉 I covered the plate with another plate as instructed and
then put it over some boiling water (no direct contact, steaming it)
and after about 20 minutes, it turned into this: 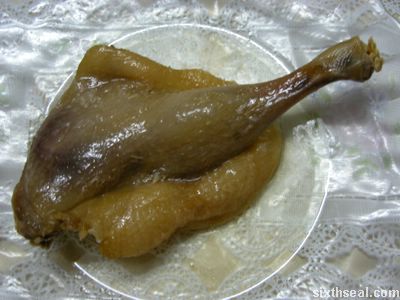 It looks much more edible now, though the waxy looking exterior
remains. It also seems quite oily as the photo shows. I ate most of it
with kueh tiaw, though eating it with steamed rice would be a better
choice to offset the salty taste. It’s very salty, no doubt. It’s also
very tough but it was edible, if not palatable (at least to me) after
the first few bites. The choking oiliness and “waxy” feeling of the
duck makes the skin very hard to consume but nevertheless, I liked it
for the novelty value and hey, these things only come around once a
year. Happy Chinese New Year! 🙂