There was this slightly demented guy distributing leaflets and carrying on
like a pork chop about how McDonald’s is poisoning everyone. According to
him, 140 people were taken to the hospital last night after having
McDonald’s for dinner. He said he heard that on the radio and was
“creating awareness” by distribution leaflets and ranting in the Caulfield
campus. When no one paid him any attention, he mumbled something about
kids not caring about their health nowadays and walked away to bother some
other people. To which the shuttle driver cracked “Dunno what radio
station he’s listening to, but it sure ain’t 3AW”. Heh. I like that
shuttle driver. He’s always cheerful and friendly. Anyway, I’ve got heaps
of stuff to do now. Two assignments due tomorrow. Poor me. 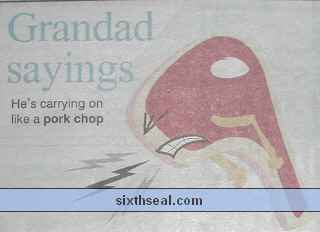 Carrying on like a pork chop is Aussie slang for making a big fuss.