I missed the shuttle again today and thus was forced to take the
Huntingdale bus to connect with the Flinder’s Street Station train. The
thing is, the 12:40 pm bus gives you exactly 5 minutes to walk from the
Huntingdale bus stop to the train station. Normally this is more than
enough, but today the bus was delayed by this long ass truck who was
trying to back into a plaster factory right off the highway. The trailer
was so long, the truck actually had to go over the road divider to back
into the driveway of the factory. Thus, all four lanes of the northbound
traffic was down to a standstill to accommodate the truck. The truck took
a good 5 minutes to completely back into the driveway and thus, by the
time the bus got to the train station, the train was already pulling in. I
had to sprint to get to the train platform and the doors started closing
just as I ran noisily into the train, startling a poor old lady who was
about to doze off. Heh. I think only 3 of the 15 people on the bus managed
to get on that train. The next train is a good 20 minutes away and that
would make me late for my tutorial so that’s why I wanted to get on this
one. 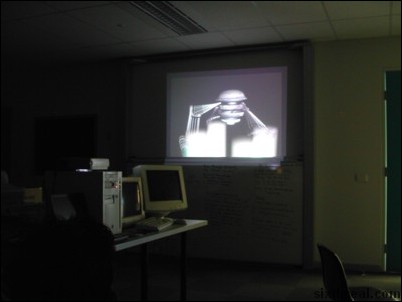 A router in action

Anyway, I had my Network Administration lab today and there was this movie
being shown to explain the concept of the Internet. I’ve seen this one
countless times before, the movie is
Warriors of the Net
[warriorsofthe.net] and it’s made by
Ericsson for internal purposes but seems to have spread far and wide
because, truth to be told, it actually is a very good movie that explains
networking concepts in easy to understand terms. 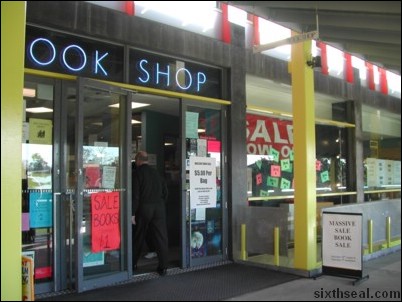 Well, as I was heading back I saw that the bookshop is having a sale
tomorrow. It’s not your normal, run of the mill sale, but one where you
can fill a bag with as many books as you can for only A$5! Basically, they
provide you with a bag and you go around stuffing books into the bag until
you can’t fit anymore in and you pay A$5 at the counter. I’m not sure what
books will be available and what the size of the bag actually is, but it’s
a pretty good deal nevertheless. If you’re interested, that’s the bookshop
of the Caulfield campus of Monash University.