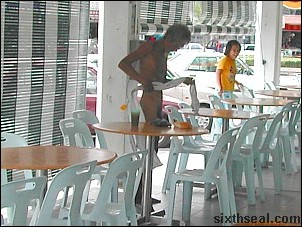 Hmm…that’s a good question. I was out having lunch with a friend
when this old man sauntered up and peered at our food. I could see his
patch of pubic hair (it was grey if you want to know), which couldn’t
be covered by that miniscule piece of cloth he wound around himself. I
looked at him questioningly, and he turned away and walked to another
table. The view of his back showed that the piece of cloth was not
sufficient to cover his anus as well. In fact, it left it wide open (it
was black-ish, if you’re interested in the color). 🙂 Very strange guy,
he’s harmless but yet he disrupted the rest of the customers due to his
near nudity. Two families promptly got up and left the moment he came
by them. He was indifferent though, he just stood there and TOOK OFF
HIS CLOTH. I won’t go into details regarding his anatomy, but I could
see everything. He then wound the cloth around himself again and sat
down and ordered some food to eat. He was around 70 by the looks of
it…poor guy, I think he’s trying to make a fashion statement. That,
or he’s mentally deranged.