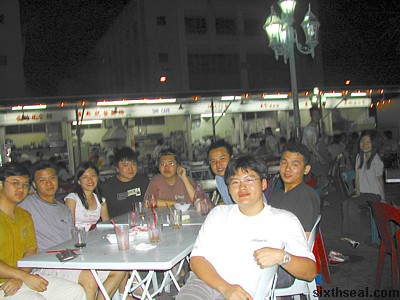 From left: Christopher, Johnny, Ming Tze, Huai Bin (me), Ting Chuan, Thai Ling, Boyd, Daniel.
On the right hand side: Siew Ting, who doesn’t like to be photographed but ended up in the frame anyway 🙂
Not shown (left early): May Ling, Susie

I went out for supper today with a couple of my ex-classmates. It
was good to catch up with the happenings of everyone. The juiciest
gossip of the day is the apparent fact that KATHERINE LAW and ALVIN TOH
is going out! Heh. The were two confirmed sightings (one by Boyd and
the other by Ming Tze) of them holding hands while walking around in
Wisma Sanyan. Both of the sightings resulted in a subsequent loss of
physical contact between their hands when they saw the sightees. I
thought I saw Katherine last time I went to Parkson too, but I wasn’t
sure. Anyway, apparently this is a bit of a hush hush thing (for
reasons unknown). Boyd, who lives together with Alvin in KL didn’t even
know about it until recently, although he did report a suspicious
increase in communications via SMSs and ICQ msgs between Alvin and
Katherine. It’s interesting that the two ended up together, you’ll be
as surprised as everyone was if you knew them. 🙂

Anyway, tonight started with Daniel picking Johnny and myself up at
around 8:30 pm. We went to Christopher’s house, and man, is that house
sound-proof! Horns were useless in summoning anyone, so I went down and
knocked on the door, with no results. I could clearly see 4 people
talking in the living room but despite my (loud) calls of “Auntie!” no
one could hear me. I did knock on the door a couple of times, but it
took 2 full minutes before anyone could hear me (!).

Well, we got Christopher and headed over to Ting Chuan’s house. We
had planned to meet up with Thai Ling and Boyd, and May Ling and Susie
were also going to join us. Ting Chuan had made plans with Ming Tze and
Siew Ting and were going to pick them up and join us at Taman Selera
Muhibbah in Pedada later on. Anyway, I’m going into way too much detail
here. The bump on my head must have affected me in strange ways. 😉
(more about that later) 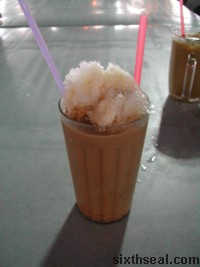 Anyway, we all met up at Taman Selera Muhibbah and talked until
11:30 pm. Why am I going into so much detail? I ask myself.
Hmm…anyway I had two cups of my favorite drink – Shi Ta Tien Wang/Shi
Ta Kai Sing (literally: four great heavenly kings/four great
happiness). It’s an ice blended drink containing coffee, horlicks, milo
and tea (thus the name). There are two names for it partly because of
the competition for customers over there. It’s absolutely insane. Every
stall will send a representative to swarm you the moment you sit down
and show you their menu. Not only that, if they see you ordering from a
competiting store, they will saunter over and whisper conspirationally
that the particular store’s stuff is not fresh and they make better
stuff. Heh. 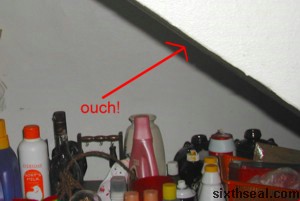 Anyway, moving on, I bumped my head very hard on this outcropping of
stairs in my store room while trying to extract my cat from the store
room. I think I forgot my name for a couple of minutes. 🙁