I remember that I used to stuff things down the overflow protection
hole in sinks when I was younger. You know, the holes that appear on
most sinks to prevent flooding when someone puts the plug in and leaves
the tap running. Anyway, when I was younger I was simply amazed by this
concept and with my vivid imagination, I thought of the hole as the
mouth of the sink, and I used to bestow offerings to it, lest it turns
into an angry sink and rampage or something. I was 13 at that time. 🙂 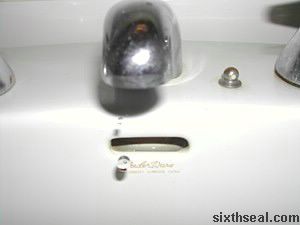 Well, I’ve stuffed all sorts of stuff into the hole during my youth.
Small plastic toys, the bony wing part of chicken wings, my sister’s
hairclips. Oh, and those black flat seedless prunes were a perfect fit
too. It’s a wonder my sink’s pipes never got blocked. The worst thing
was, I used to do this to other sinks too, not just my own. I remember
my grandma’s sinks received plenty of offerings in it’s time. 🙂 I got
tired of it after a while though. Rampage on, hungry sink.

(Tasteless) Joke of the Day:

Q. What does NASA stand for?
A. Need Another Seven Astronauts [cnn.com].

1 thought on “Walk for your lives!”