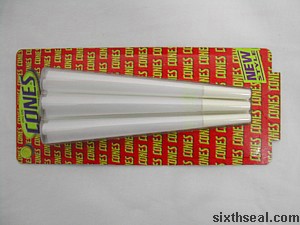 Cones is a brand of joint paper cones made by Mountain High
[mountainhigh.nl]. It retails for A$3.95 at Off Ya Tree, a local
headshop. I’ll be honest with ya, my butter fingers can’t roll good
joints. The joints that I make inevitably draws very poorly, due to the
cannabis not being packed tightly. Cigarette smokers, you know what I
mean. When you don’t ‘pack’ a pack of cigarettes by tapping it upside
down against your hand before opening, the draw (referring to the air
flow here) becomes very poor. I don’t know how to explain it, but
packing cigarettes optimizes the air flow and makes it draw better. 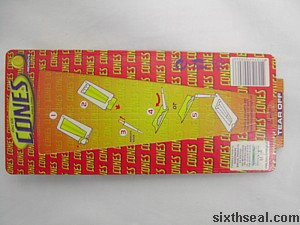 Anyway, enough about (the lack of) my joint rolling skillz. I
usually smoke marijuana using a bong because smoking it with joints
seems like such a waste of good cannabis. However, there are times when
toking on a joint seems appropriate, like during celebrations or in
situations where it’s not feasible to carry around a bong with you. The
Cones by Mountain High comes in a pack of three and is made using king
sized joint paper. 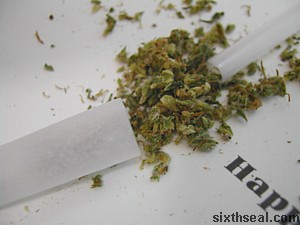 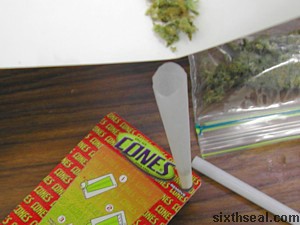 The second method is done by tipping the cannabis into the cone
instead of pushing it. The packaging of Cones has this removable hole
on the upper right hand corner with the word Remove. By
removing the hole and putting the package back side up, there is a
place for you to place the cone while you fill it using the second
method. The packaging of the front is such that it produces an elevated
platform for the cone to be placed in the hole when it’s overturned.
Very nifty indeed. However, this method makes it easy to accidentally
touch the cone with the card you’re using to drop the cannabis into the
cone. Doing this of course makes it bend at the weakest point (the
thinnest point closes to the filter) and has the potential to tear the
cone if you do it hard enough.

Now to the taste test. The paper used to make the cone is thin, and
it tends to burn too fast for my liking even if you’re not toking on
it, which is wasteful. The taste of the cone leaves much to be desired
as well. It has this rice paper taste which is unnatural and somewhat
distasteful. The taste of the paper tends to overshadow the sweet
tasting marijuana smoke. The structure of the cone is pretty flimsy as
well, but that shouldn’t pose a problem if you’re reasonably careful.

Personally, I don’t like it enough to want to buy it again. But it
certainly has its merits. The cardboard filter works well in keeping
the shredded cannabis in the joint instead of drawing it into your
lungs which is an ‘Ack!’ moment that I always have when rolling my own
joints. If you look hard enough, you can see small groove patterns in
the paper, like the ones most cigarettes have. This is to make the
joint burn evenly, and it does that well. A nice touch, this. Also, the
straw included in each cone is perfect for packing the marijuana into
the cone, leading to a very good draw.

It’s A$3.95, which isn’t really expensive, but you can get rolling papers for much less than that. I’ll prefer the Royal Blunts EZ Roll Tube [sixthseal.com] though, if I want a change from smoking from a bong.

Caution: Possession of cannabis is against the law in most countries.