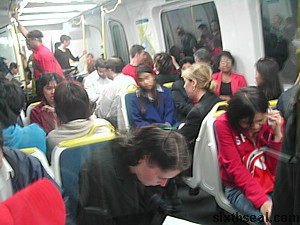 *puuuushuuuuuuuuu* (sound of a balloon deflating) I just got back
from the code review. I’ve got a list of 23 odd things to fix with my
code before Monday. It’s mostly minor stuff though, so it’s still okay.
Our supervisor has selflessly sacrificed a good chunk of his after work
time to go through our code and my group mates and I spent several
hours in his office while he went through the code with a fine tooth
comb.

Anyway, I’m pretty tired now so I’m going to sleep early tonight.
I’ve gotta wake up early tomorrow coz it’s the last day I’ll be able to
work on my Neural Networks assignment. It’s due by Friday 12 noon. The
above picture was taken tonight on the Pakenham train I take to get
home. It’s not very clear, take a train in Melbourne and you’ll know
why. It’s not exactly smooth sailing.

I took two photos actually, and the second one was when the train
was stationary so it should be clearer. Unfortunately, the second one
mysteriously disappeared from the memory card. I’m going to file that
under mysterious mysteries. I think I may very well be the only one
that finds myself funny. =D Anyway, I’ve noticed that there are three
peak hours for trains. The first two are logical – the hour before
office hours and the hour after office hours.

However the carriages are always full from 8:30 pm – 9:30 pm too.
I’ve thought about this and the best reason I could come out with is
that the passengers are people who went out for a drink and to catch up
with friends after office hours instead of going straight home. The
fact that night trains are truncated might have something to do with it
as well. The trains after 7:30 pm are not full length ie some carriages
are removed because it’s supposed to be off peak hours. Truncated
trains. 🙂 I alliterate.