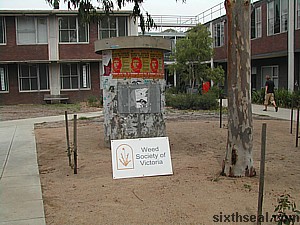 I remember this episode of The Simpsons that had Otto (the stoner
bus driver) coming out of a shop which had a large sign saying pot
something or other (I think) and he said “That’s just false
advertising”. Heh. The shop in that episode was really selling pottery
but the name of the shop was somewhat misleading and the color scheme
was very much like a head shop too.

Anyway, I’m still not done with my assignment that’s due at 12 noon
tomorrow! I’m feeling very unproductive now so I’ll get some sleep and
wake up at around 3 am to work on it again. I’ll have to go to the 24
hour computer labs in campus to do it though, the program we’re using
is not available for download. It’s a good thing I live on campus…

Well, I updated the Picture of the Day, which should be called
Picture of the Month. I also fixed the CSS to make it display properly
on 800×600 now. My apologies, I didn’t realize the sidebar wasn’t
showing up in that resolution. By the way, the Weed Society of Victoria
[vicnet.net.au] is not what first pops into the mind, but a legitimate
organization “to promote wider awareness and interest in weeds and
their management” and also “to encourage the study of weeds and the
dissemination of its findings”. I’ll like to say that sounds
interesting, but that would make me a liar.

THERE IS A BOMB ATTACHED TO THIS TOILET, GET OFF AND YOU DIE! Check out the Picture of the Day. Classic toilet graffiti.

14 thoughts on “Weed Society of Victoria”