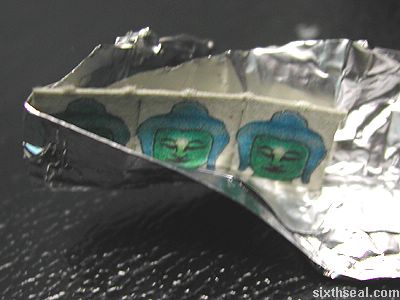 3 LSD blotters in foil – the blotter art is a Buddha figure.

Lyserg-Saeure-Diaethylamid (Lysergic acid diethylamide-25) – the
brainchild of Dr. Albert Hoffman. This was the first drug I’ve ever
taken and I’ve had about 35 trips of acid since then. Unfortunately,
this substance seems to be rarer these days and I haven’t seen it
around for years! LSD is not available in Malaysia (at least I’ve never
come across it) and even in Melbourne, there’s only rumors that acid is
around but no one seems to be able to get hold of any.

I recently managed to get in touch with someone who can actually
deliver this rare (or so it seems) chemical. The best thing was the
price – it’s only A$15 for each blotter! It has been 6 years since I’ve
last tripped on acid, and I’m sure glad to see it around, so I bought 3
blotters. The blotter art is a picture of a Buddha with a green face
and a blue head piece.

I intended to take a single blotter because it’s been a while since
I’ve tripped and these Buddha blotters were said to be strong. I
perforated one blotter and put it under my tongue and listened to some
psy-trance. My past experiences with LSD were always in raves, but I
wanted to take it in a safe environment this time to gauge the
strength. It was strong acid alright, and I made the mistake of
dropping the other two blotters when I felt the first familiar effects
take hold.

I scanned the blotters for a clearer image. This is the front with
the blotter art. The size of each blotter is about 1/3 of your smallest
fingernail if you have big hands and 1/2 if you have average hands.

I thought I could handle the experience but I haven’t taken into
account my frame of mind (not so good) at the time. I knew that taking
all three blotters was a mistake when things started getting too
intense and I had to shut off the music. I’ve forgotten the utter mind-fuck that LSD produces and I spent the night reading the Psychedelic Crisis FAQ [erowid.org].

I knew deep down that everything was alright and it’s just the acid
that’s fucking with my mind…but if you’ve taken a high dose of LSD, you
know how things can get out of control inside your mind. 🙂 I’ll admit
it, I was terrified. I know that everything would go back to normal in
10 hours, but everything was so intense, so unstoppable that I had a
bad trip. I was utterly blindsided by the strength of these blotters –
taking all 3 was a mistake indeed.

I know that I’m not going insane. It’s just the acid, it’ll all be
good in 10 hours, I tell myself. I know it’s impossible to overdose on
LSD (the LD-50 is very, very high) but I was scared that I’ll be insane
forever. I actually seriously considered checking myself into a
hospital! Imagine that! What ludicrous thoughts I entertain in my mind
while under the influence! I know it’s just the drugs, and I’m really
glad I had enough experience to stop things from getting really out of control.

This is not the real size of the blotters. The scanning process
enlarges the image and shows more detail. This is the back – plain and
you can see the perforations.

I practically tore apart a blister pack of Xanax (alprazolam) in an
effort to calm down. 2.5 mg of Xanax didn’t do anything, so I sedated
myself with a further 15 mg of Valium (diazepam). I shut down all the
lights (to reduce stimulus) and laid in bed with blankets around me,
watching the trails as the blankets moved. Closing my eyes produced
repetitively green geometric patterns flowing and morphing through my
vision and I was getting auditory hallucinations too. I opened my eyes
to see a warped room that I could barely recognize, the proportions
were wrong and things were too fluid.

Finally, the benzos did their magic but I still couldn’t sleep. It
was a weird state of feeling like I was floating to sleep, and then the
acid kicks in and I jerk awake into an unfamiliar room. I was pretty
much sedated by then though, so I got up and managed to resume the trip
report I was trying to keep. Hah! 🙂 I don’t remember much after that,
but I know I went out to get some food and saw someone and had to avoid
eye contact while getting food. That’s about the only thing I
remembered clearly before managing to eat and sleep. Here’s the trip
report, in all its unedited glory:

things you might want to know: yes, i licked the scanner after. might be nothing, but eh, i’ve done nastier things 😉
took 1 blotter
t+30 felt the effects
it was so nice to see uncle sid again
very positive and quite strong and i felt such a positive vibe, i took the remaining two
took the two remaining blotters at t+30
t+60
okay, i’m regretting that now. very intense.
okay so regretting it now.

its to intense. like with the codiytion of acid being the way it is
most pepl have never had a full hitt and dose . i’m respectign this
now. i’ved forgotten ny respect for you uncke side
wow

don’t want to be a danger to myuself and others

can’t abort even with 2.6 mg xanax
still going strong
i’m aware of everything, just wouldn’t want anoe to see me in this sate now
wow i underestimated lsd
don’t ever do that, if you are, chances are you’re not takking a hard
dose or you’ll find it hard to conrol even with experience if alone

t + can’t think properly
this is reli strong dose to affect this way empahais that if they’ve
never taken experienced such midn budnering wat is true wat is fiction?
repect it i wonder how many ppl can handle this kind of things alone and still have the reality achor to know themselves
quit this self serviding bullshit and get done

managed to get myself soome food in: i think there was something
that was said abotut men not khlepong another girl take in her stuff,
but sorry thats just coz i was in the middle of a psychedulic crisis
and was trying to aboidinb eye contatct!!! sorry i would have helped
otherwise but not when i’m fucking tripping ballz on lsd. and i dun
even know if you’re a fucking polis or somehow related to yes and is
gonna tip me in or something

gosh now that i think about it its scaring me. i acted normal

end of story: this has taught me an important lesson. dont think
that you know all there is to a drug and can “hadle” it. given me
repsect on lsd an whe intense warp in can have on everything, antyhing
and evertyhgin
🙂
open cevs
you haven’t had really good acid unless you’re sure you’re on it\

I woke up the next day feeling embarrassed for getting so completely
0wn3d by a substance I thought I was experienced in. I’m utterly
humiliated by what I wrote in the trip journal, but I’m going to post
it anyway, coz it shows how badly strong psychedelics like LSD can mess
with your mind. =D It’s disjointed and hard to read, but there you go,
everything I wrote posted as is. Buddha taught me how to write the word
‘respect’ that day. Oh well, no harm no foul, and I’m going to treat
acid more carefully now. Sure, it’s not dangerous, but it definitely
gives you one helluva mind-fuck! 🙂

P/S – I’ve finally uploaded my About veritas page. I took the template from Huai Bin’s “About me” page and just added my stuff in. 🙂