I don’t know where that animated GIF came from. I got it in the
signature of an email from a friend and he doesn’t know where he got it
too. Oh well, these things tend to fall into public domain anyway. 😉
The track is off IsrAliens 2 – Bizarro. Please be kind to my limited
bandwidth. 🙂 It’s an Infected Mushroom one, but it sounds more
‘mainstream’ than the stuff they usually come out with. That makes it
easier to get into, give it a listen, you might like it enough to get
their other albums. Infected Mushroom makes great psy-trance, my
favourite track is still Tommy the Bat off The Gathering. That one just
blew my mind away the first time I heard it. Hmm…in fact all the tracks
in that album is great. Messy! 🙂 MP3.com used to have a lot of their
tracks, but it’s all been replaced with Deeply Disturbed off their new
album.

Okay, I have an assignment due tomorrow, and I can’t write much so here’s my day in GREYSCALE photos: 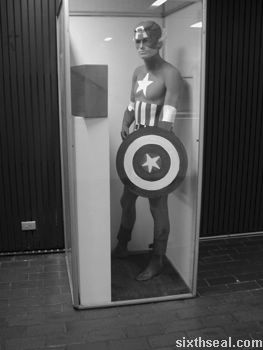 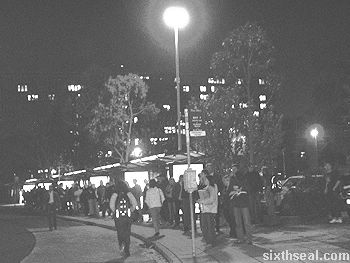 I noticed a very long queue for the 630 Huntingdale bus at the
Clayton campus bus loop when I came back. It usually is quite long at
around these hours, but I’ve never seen it grow to these proportions
before. Lack of detail at the back, I’m still learning how to take good
night photos. I took three – one with suppressed flash, one with full
flash, and one with “quick flash” (a fast and short flash before the
shutter opens). I found that quick flash works well in night photos,
but only in enclosed spaces, it doesn’t do much at all in wide open
areas like this. No flash produced the worst photo, hardly any detail
in it. Full flash wasn’t good (I already knew that, but just tried
anyway) too, it just artificially brightens the front people and hid
all detail at the back. The photo above is from the quick flash shoot,
which was the best shot in among the three. I used a sensitivity of ISO
400, aperture of f/0.8 and a shutter speed of 1/125s. Noise reduction
was also turned on, but it’s not exactly the best settings. 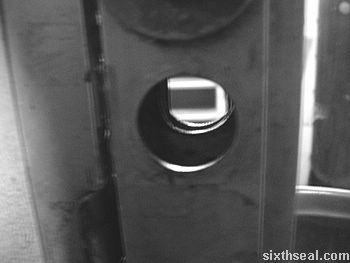 This was what I saw when I got back. The Stairway 8 door’s lock has
been removed for some reason. No need for keys then. Back to
assignments…after 9 am today I’ll only have one left! =D Oh wait…it’s
past 4 am now, so that means…that means…*calculating in head*…I only
have 4 hours to complete this one! Fudge! No, I really am eating one.

Link of the Day (internal): The Anonymous Game Developers at www.tierragames.com comments on Magnum “The Sixties Nine” [sixthseal.com].

You really have to read this comment…classic! 🙂

Link of the Day (external): A good parent? [sanlive.com].

Link of the Day (news): Police charged over heroin [theage.com.au].

No wonder the contact I used to get heroin off insisted on being called “Detective”. Kidding! I joke too much. 🙂