I had an interview worth 30% of the course marks, which I just had
to miss…by 35 minutes. That’s late, considering we’re allocated 30
minutes each for the interview. I don’t understand why I had to wait 45
minutes for the 630 Huntingdale bus on a weekday. Lunch hour is no
excuse, the connection to the train didn’t go well and I only turned up
for my 12:30 pm interview at 1:05 pm. The tutor was kind enough to
reschedule it to next Monday, so that’s one good thing at least.
Anyway, I wanted to write more but I’m just coming down like a ton of
bricks right now, so here’s a picture I took today: 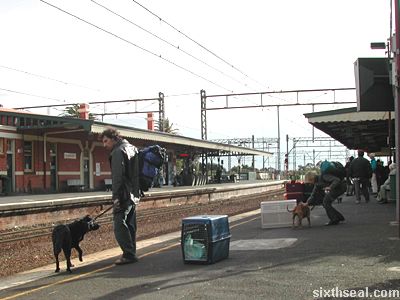 This scene entertained me for 15 minutes…I was waiting at the
Caulfield train station and the Pakenham/Cranbourne/Frankston line is
also used by the V/Line trains to Sale. Sale is a town which is quite
far away from Melbourne and there seems to be some kind of dog
competition going on because I saw three people with dogs in those
portable kennels. I liked the interaction between the black one and the
brown one. The black dog (being physically larger) feels he is the
dominant one and wants to make it known by making a loud “woof” when he
saw the brown dog. I like the brown one, it looks worried. 🙂