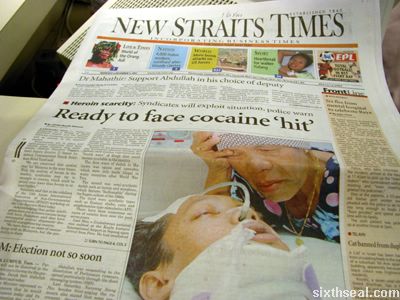 and more FUD from the Federal Narcotics Department. I honestly
wonder how much the department and the media knows about
drugs…there’s this distinct lack of knowledge about drugs and the
behavorial aspects of drug users, it’s a wonder they can differentiate
between Ecstasy (MDMA) and Erimin (nimetazepam). Er…nevermind, I
don’t think most of them can. 😉

Anyway, this article is here:

Copy and paste into the URL bar coz it’s not permanent, it’ll be
de-linked in a couple of days like most newspapers with an online
presence. Highly recommended and humorous read. 🙂

P/S – Just in case some people are wondering what’s so funny, heroin
users typically (in Australian and other country’s studies during
periouds of draught) turn to either methamphetamine or benzodiazepines
like temazepam. Come on, no one would go for coke, it’s so expensive
and lasts for a scant 30 minutes compared to the much longer lasting
meth. It’s stupid to even suggest that heroin dependant people would go
for cocaine, meth (which is cheap and plentiful in Malaysia) would be
the obvious choice. I didn’t even want to blog about this, but it’s
just too illogical and ill researched and yet it made a front page
article on a major daily newspaper.

Funniest statement:
We have found no cases of cocaine being sold in Malaysia, but the possibility is there.
Look harder. 😉

Most illogical statement:
With the scarcity of heroin in the market, syndicates may try to
smuggle in cocaine, which could be priced even lower than heroin to
attract buyers.
Error…sentence does not compute. :p

Right. Back to work.