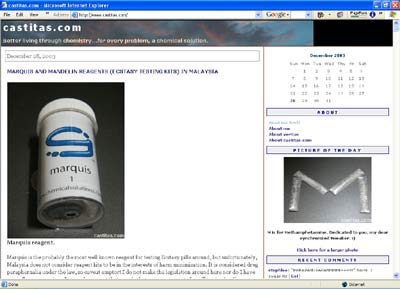 Whether you love it or hate it, it’s part of the sixthseal.com network, which currently includes:

castitas.com is where veritas writes and the content does not appeal
to everyone…it’s more of a blog with a limited target audience.
pengsan.com is a work in progress but we’re not talking about that now.
castitas.com was also meant to be a load balancing server, since it
doesn’t receive the 1.6k average (stats for December 2003 as of today)
unique visitors (not hits, visits) this site gets per day.

The first works by allowing recreational drug users a look into
other perspectives, like the culture in Malaysia while the second is
meant to dispell the “junkie” stereotype by providing non users a look
into a recreational drug user’s life and hopefully see that there’s
intelligent users who does not pose a threat to society. That’s not to
say that veritas is a the safest and most responsible user out there
(haha), but hopefully, it would foster some understanding and tolerance
and realization that not all drug users are violent criminals.

The move was a mistake because veritas cannot possibly post daily,
so visitors do not know when a new post would be made. We both feel
that the glory days (or zaman kegemilangan as I like to call it) were
when the content was integrated and that sixthseal.com jumped the shark
sometime in July 2003. However, that does not mean that the main site
would stop churning out daily posts – I still like blogging.

This long winded post is meant as a prelude to the future direction
of the sixthseal.com network. There will be changes…very soon. Four
days. I’ll not be revealing anything now, but whether you love it or
hate it, castitas.com will be heading in a new direction on the 1st of
January 2004.