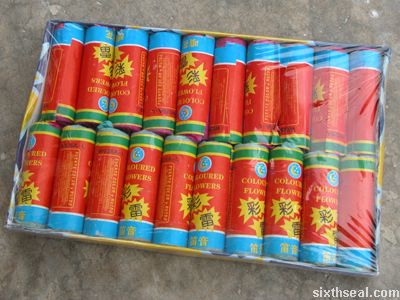 This is the classic Colored Flowers a.k.a. Chai Lei (translates to
“coloured mine”). It costs RM 7 at your friendly local fireworks
retailer – usually operating with a single shutter open and stacks of
canned drinks obscuring the view. Please do not be mislead by the
benign sounding name – Coloured Flowers is a not something you light
and watch the pretty sparks fly. 😉 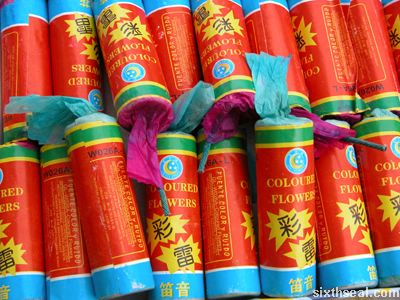 Well, actually it does sparkle for a bit before it explodes, but
anyway. These are the classics for people getting into all sorts of
mischief i.e. time delay fuse (mosquito coil lar) rigged up, stuck into
toilet cistern and pity the poor guy who’s taking a dump while it goes
off. The time delay fuse is obviously to put a suitable amount of time
between the act and the deed so an alibi can be established. 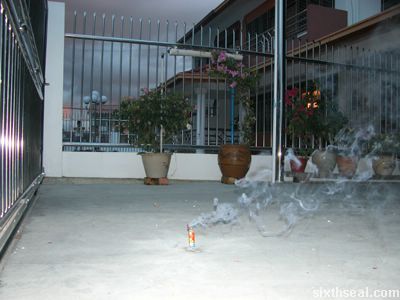 The fuse of the Coloured Flower burns…

This is the Jin Yue Brand ones – the choice of connoisseurs. It
comes in a pack of 20 firecrackers – with 10 green tops and 10 red tops. 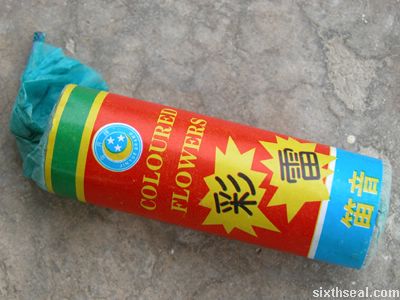 The green tops make a horrific shriek (and a green flare if you’re lucky) as the fuse burns into the primer before exploding. 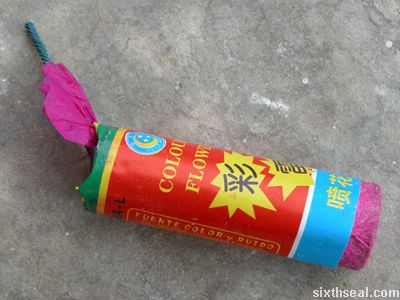 The red one actually produces a nice, short burst of colourful
sparks before exploding. Otherwise, they are similar, the different
color determines how the primer reacts. 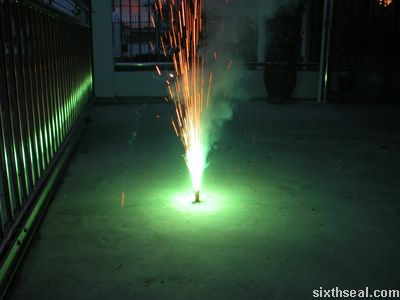 The green one lights… 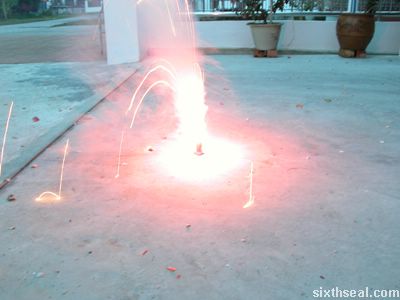 The red one lights…

I would say that these are louder and more powerful than the new
Coloured Flowers (below). It costs RM 1 extra per box, but it’s worth
the premium. 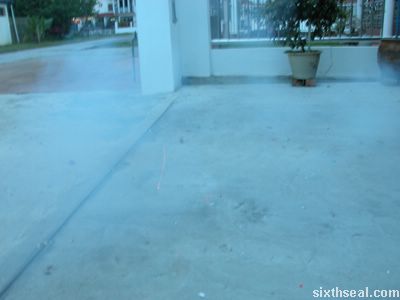 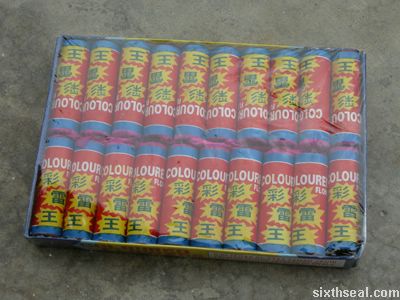 This is the new breed of Coloured Flowers and one which most people
would be familiar with. It’s made by another company and also comes in
a pack of 20. It costs RM 6, one dollar less than the classic ones but
it can hold it’s own to the originals. The box is slightly smaller than
the Chai Lei box and each firecracker is also slightly smaller. 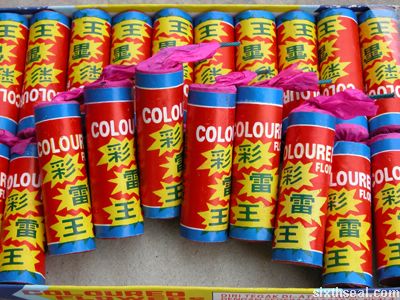 However Chai Lei Wang (literally “colored mine king”) differs
physically from the first in its effects. It also has a primer but the
primer produces normal flame coloured sparks before the firecracker
explodes. It registers a little lower in the decibel meter but not by
much. These are the common ones that we used to play as children; we’ll
wait for the primer to flame before chucking it. 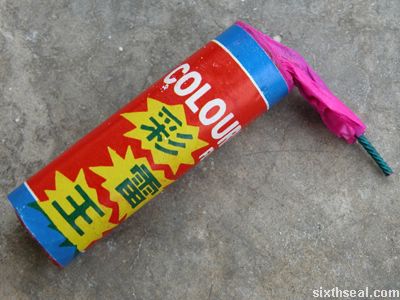 We soon learnt that the time it takes after lighting the fuse and
chucking it does not have a direct correlation with the size of one’s
balls and also another more important lesson – Chinese factories does
not have the rigorous quality assurance process that we take for
granted in other factories. Not all Chai Lei Wang has a primer, some
just explode as soon as the fuse burns out, though these are rare.

Here’s a short movie of how the Chai Lei Wang works:

My apologies for the bad take – we shot several times. It sounds
much louder than it does in the video due to hardware limitations. The
first two we messed up, and I forgot to wait till the primer ignites in
the third shot (which is the one you see above) and I did remember in
the forth one, but the cracker rolled into a longkang and it was a bad
take. Also, I noticed I felt the need to protect the family jewels in
the last minute in the video above. Heh. Anyway, the dog got a bit
freaked by the loud noises after that, so we did not attempt any more
shenanigans. 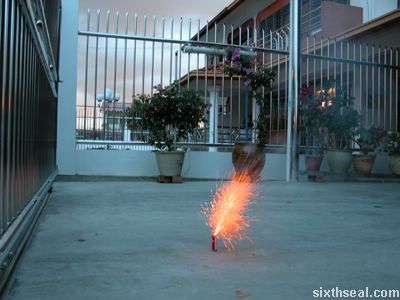 This is the primer of Chai Lei Wang burning (not to be confused with
the fuse (forgive the pun), the fuse has already burnt out before the
primer – it lights the primer). 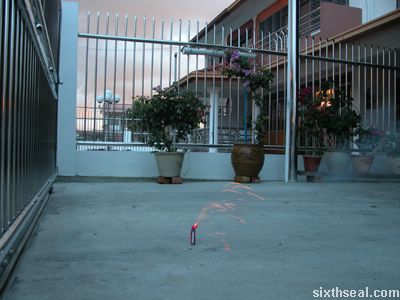 It burns into the cracker… 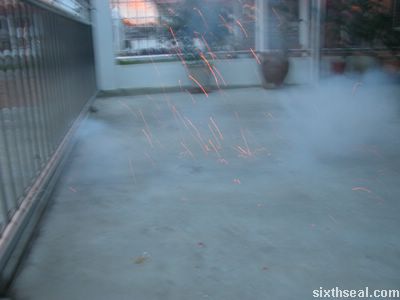 Disclaimer: Waiting for the primer to ignite is the “correct”
way for teenage boys to play Chai Lei Wang, but is not recommended due
to the variable nature of the primer and fuse. 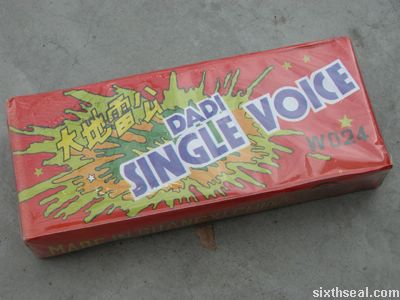 I love these things…I would pick this as my favourite firecracker.
It’s loud and it’s destructive. Throw it too close to a window
and…well, you’ll have to call for the glass cutters. It costs RM 10
for a box of 20 and the premium price is worth it. These babies are
larger than Chai Lei’s (both variants) and leaves a nice red carpet
after it ignites and explodes. 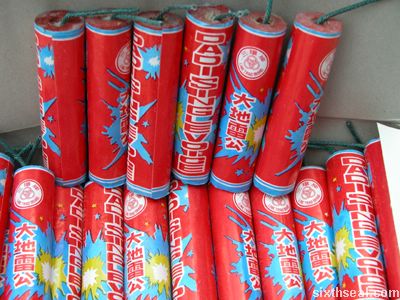 The aptly named Da Di Lei Gong (literally “big earth thunder king”)
used to be my favourite when I was young. I remembered a funny incident
from many Chinese New Years back. I was lighting one of these and saw
this rubbish collector trundling along with his basket. Mischief can be
allowed for at that age, so I rigged up a short time delay with a
sparkler. I sauntered back in, and watched from inside my compound as
he reached it…I knew I had the timing right. 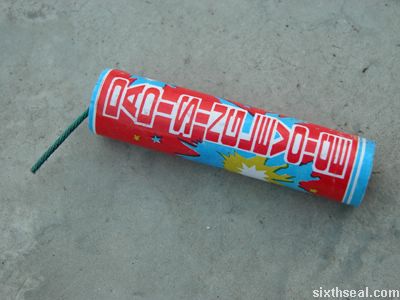 Just as he was picking up my garbage can, the DaDi cracker exploded
and as I stand here today, I swear he jumped a meter up. Heh. These
things are loud, no doubt about it. 🙂 Anyway, the damage potential of
these firecrackers is all blown (excuse the pun) out of proportion,
IMHO. While its common sense not to hold onto the crackers while it
explodes, anything else is pretty much okay for adults. 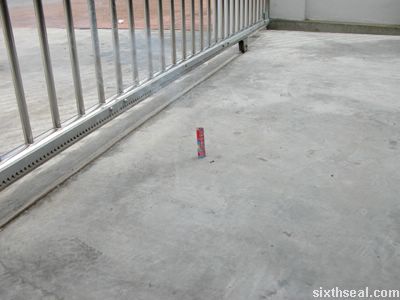 I take the shots close and my digicam lens didn’t crack or anything
(though I have tinnitus in one ear)…even as kids we used to throw
them around and yeah, I can attest that one of these going off right
beside you would not cause any damage (except, as stated previously to
your hearing ;)), did that several times just now while fooling around.
While I won’t make this into a call for the re-legalization of
firecrackers, I feel that there’s no reason to ban what is a
fundamentally Chinese way of ushering in the New Year. 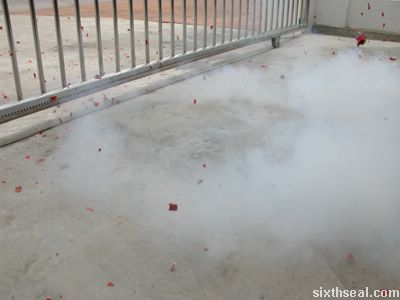 I can’t imagine a Chinese New Year without firecrackers. I do think
that they should not be sold to people below a certain age, say 16, but
I do not support an outright ban. It’s always “for the kids”, someone
always has to say “Oh, won’t someone think of the poor children” when
someone gets hurt and just like that, it’s banned. I call it lack of
parental supervision. It’s your fault, no one else’s, stop pushing the
blame around. It’s the same with drugs. Come on, let your citizens
think for themselves; don’t do their thinking for them. I digress.

Anyway, obviously I haven’t conducted ballistics testing on these
things but qualitatively, DaDi Single Voice seems to be the loudest one
and it seems to be the “stronger” one of the three. Let’s put it this
way – if I had to choose between Chai Lei and DaDi to hold onto in my
hand while it explodes, I would choose the former. 😉

My apologies for not featuring the other classics like Chung Tien
Pau (“rush sky cracker” – the double report bane of housing estates
everywhere ;)) and Thunder Clap. They were not in stock this year. 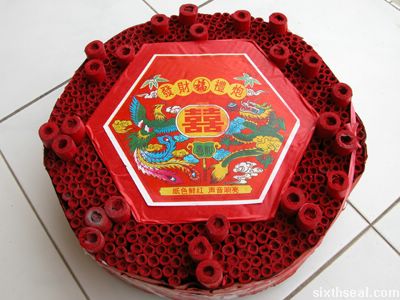 This is the traditional Chinese New Year staple to be let off at the
stroke of midnight. It’s a long string of firecrackers with a big boxy
cardboard thing on top that explodes to reveal a banner with Chinese
writing for good luck. 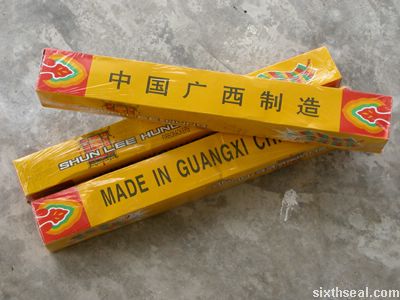 This is the other type of Chinese firecrackers. Shun Lee Hung
firecrackers are much like the one above and is common nowadays as a
replacement for the traditional rolled up ones. It doesn’t have the
lucky banner though. 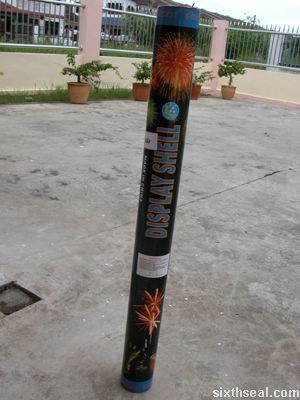 This looks like the great balls of colourful fire in the sky, you
know the ones. They let similar ones off during special events too so
most people have seen these. 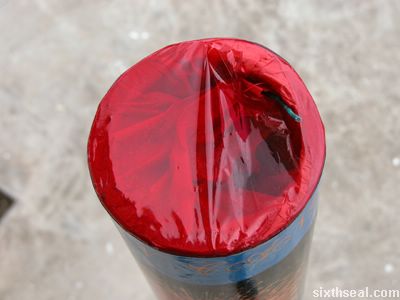 The fuse on top

It’s a long and largish tube that needs to be tied down (or have someone holding it in place). 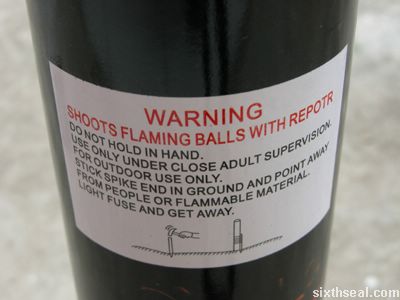 I am still searching the dictionary for an entry on “repotr”.

It does stand properly when it’s not lighted like now, but when it’s
lighted, the force of the first ball will topple the construction
without support. 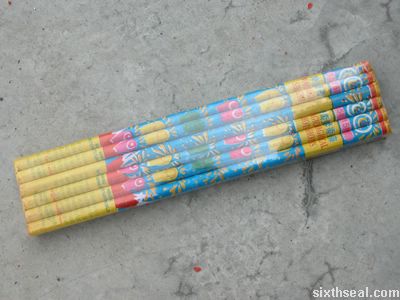 The favourite of children during Chinese New Year – each tube
propels several small, different coloured balls over a short distance.
The balls are multicoloured and it’s sold in a pack of 12 for RM 20.
It’s fun for the kids, basically, you hold it in your hand and let the
balls of fire shoot out. 🙂

9 thoughts on “Firecrackers in Malaysia – photos, videos and descriptions”