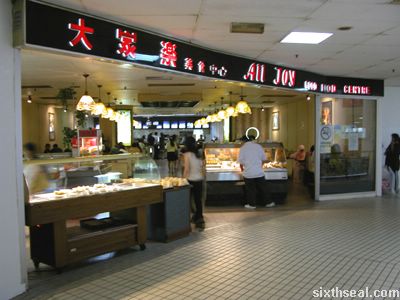 This is All Joy good food center in Wisma Saberkas. I was surprised
to see this outlet still standing when I went to Saberkas to get a
monitor during my lunch break. There is some nostalgia when I saw the
familiar sign and dining place – it hasn’t changed at all from memory.
I remember going here often when I was younger and living in Kuching,
so you can imagine how long this establishment has been going. 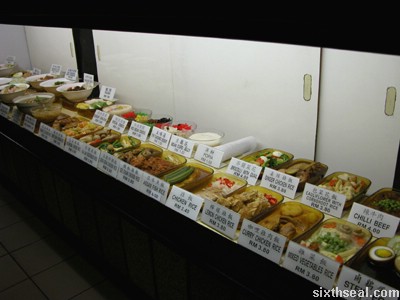 I can’t say there’s much going on, food wise, at All Joy. To tell
you the truth, I don’t even know why my family used to dine here often.
Their offerings don’t seem to have changed at all and it’s nothing to
write home about. I have vague memories of going for their King Burger,
but that was it. I ate one of their rice dishes this time – it was what
the others used to eat last time. 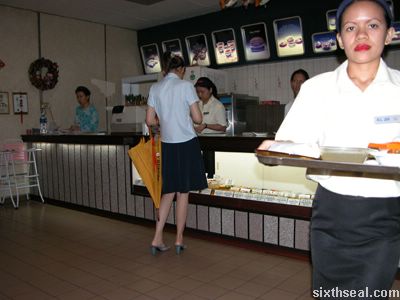 I had Sze Chuan Chicken Rice (RM 3.80) and a popia (RM 1.50)with
special cendol (RM 1.50). The rice isn’t chicken rice ie chicken
flavored rice, I knew that from previous visits. It’s rice with the
dish of your choice, and there isn’t much on offer. My apologies about
the messed up photo – I wanted a candid shot of the All Joy waitress
bringing my tray of food over, but I miscalculated the fast flash lag
time and only got a partial shot. 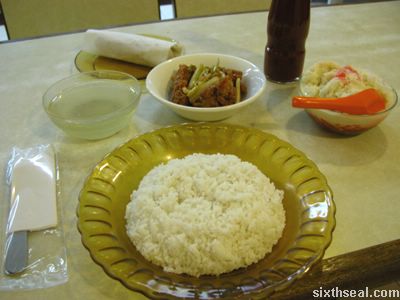 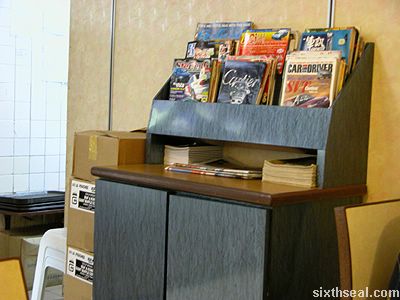 Perhaps the appeal of All Joy (Good, don’t forget that) Food Center
is due to the magazine and newspaper rack it provides to enhance your
dining experience with reading material. 🙂 Anyway, like I said, I
picked up a monitor (choice between an insanely high dot pitch
Panasonic 17″ for RM 410 and an LG Flatron ez for RM 465, chose the
latter) from Saberkas after lunch…but I don’t have a net connection
at home yet.

I wrote this at home and am posting it now from a diskette (those
little square black things that stores a meager 1.44 MB of data) at a
cybercafe in King Center. I don’t know when I’ll be connected since I
don’t even have the time to go to a Kedai Telekom, but I’ll do so next
Monday lunch break. Anyway, I noticed that sixthseal.com is becoming
food-centric (as someone put it in the early days of its inception)
again, so to spice things up – a pill report by veritas this weekend!
=D I kid, no such thing will be happening, though I’ll do a write-up of
lormetazepam, a benzodiazepine I’ve only recently (for about 3 weeks)
become acquainted with. No, I didn’t write lorazepam wrongly, I said
lormetazepam. This weekend then, have a nice one people!