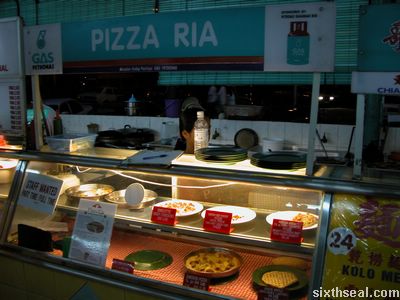 This is Pizza Ria, an outlet with meat filled pancakes, pizza,
spaghetti and even combos like 1/4 pizza with spaghetti on a plate. It
used to be at this food court who’s exact name eludes me right now.
That was easily a decade plus in the past though. I know it moved (or a
branch opened up) to Siang Siang Food Court, King Center (?) when I was
studying in Inti College, Kuching (yes, I went through 3 colleges,
don’t ask :p). 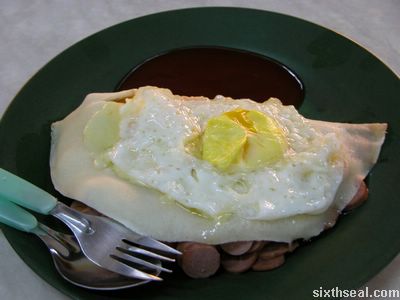 The pancake tastes better with a runny egg, this one is overdone.

I am also aware of a Pizza Ria in A La Carte (now defunct) at the
same time, around 97/98. Remember that food court below Star Cineplex?
It was bought out and renamed by Siang Siang, which was aggressively
taking over food courts then, but strangely enough, I haven’t seen any
this time around. Come to think of it, I’ve never seen Pizza Ria
outlets outside of Kuching as well, so it’s probably a local operation. 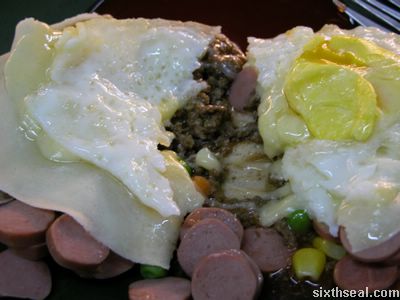 This is the Special Pancake with chicken (sausage), beef, cheese and egg. Best eaten with lots of chilli sauce!

It tastes just like the ones I remember – there’s this unique taste
to the pancake that I haven’t experienced in any of the other things
that I’ve eaten. It’s like Ramly burger…no other burgers seem to have
the same taste! I’ll equate Pizza Ria pancakes to that. The thin
pancake is smooth and soft, folded in half, with the meat and vegies
nestled inside. It’s the best savory pancake around. It’s certainly
something on the “must try” list if you happen to drop by Kuching.

I will post again and reply all comments later tonight (after dinner). 🙂 I’ve finally got myself a monitor.