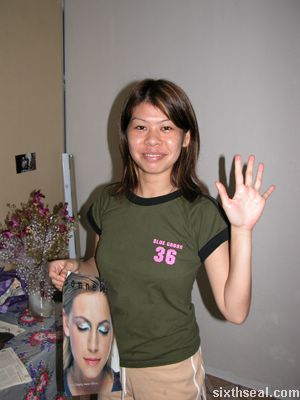 Miriam Chieng, the girl you’ll have seen in the photos on
sixthseal.com has left for Sarikei (her hometown) yesterday at 12:45
PM. I have gotten to know her quite well in this short period of time,
with our near daily (and sometimes twice daily) lunches, dinners and
suppers, not to mention the road trips that we’ve gone to almost every
Sunday. She has now gone back to Sarikei for good. It has been a
pleasure to have known her (hey, no nudges and winks back there :p). 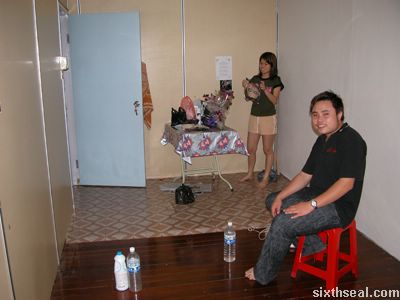 Miriam and Ah Lung (her bf) in her vacated room.

Videos:
All videos are .zip files which extracts to a .mov file. Requires Apple Quicktime.
It is easier to view the movie files by choosing “Fill Screen” from the “Movie” drop down menu.

It’s really strange to hear your own voice playback, it never sounds
like what you’re used to hearing when you speak in real life. 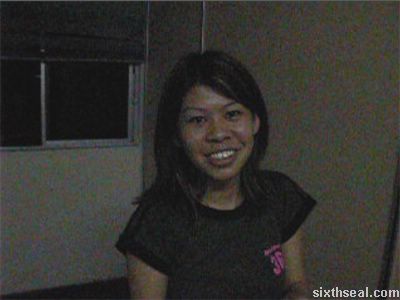 This was recorded on the night before she left. Yes, I realize I’m
slurring my words badly, it is widely known that sixthseal.com is only
sober during office hours. :p

Miriam: What?
Me: Miriam, look over here for a sec…
Miriam: Don’t want.
Me: Quick, quick. Look over here.
Miriam: (unintelligible words)
Me: You have to talk, say you’re heading home. Tell them who you are.
Miriam: What?
Me: This is for sixthseal.com, quick.
Miriam: No need to say anything lah. I’m just heading back for a while, it’s not like it’s forever.
Me: Okay, tell them you’re Miriam from Sarikei. Eh, there’s only 60 seconds, say something. Look over here.
Miriam: Don’t want.
Me: Hang on, there’s a backlight here, can’t pan over.
Miriam: No need…
Me: Smile for the camera…and say bye.
Miriam: Bye bye.
Me: Okay, let’s look at Ah Lung, we’ll see if he’s sad.
Ah Lung and Miriam has been in a relationship for 4 years
Me: Ah Lung, are you feeling sad?
Ah Lung: Nope.
Me: Say a few words for the camera. Not sad at all?
Ah Lung: No. I’m very happy.
Me: Okay, my turn. Hmm…I don’t think I can see anything like this. 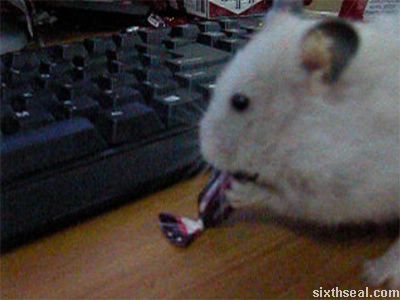 This was also filmed on the night before she left, chronologically after the first video. The hamster is really funny.

Miriam: (laughing) You’re giving the hamster candies?
Me: Yeah.
Miriam: You’re very bad.
Me: (sounds of amazement as the hamster consumes the whole
sweet). Hey, it’s really eating it whole! Lemme just give it another
sweet wrapper.
Miriam: (laughing) He’s just storing it inside his mouth, he’s
not actually eating it. (pointing at the bulging sac beside the
hamster’s mouth)
Me: Wah! Look at it go at the sweet wrapper! It’s eating the
whole thing! (multiple vocalizations of my amazement at this hamster’s
feat)
Miriam: He’s not actually eating it…
Me: This hamster is really something…
Miriam: (pointing at the hamster’s mouth) Look it’s bulging, it’s storing it there.
Me: Hey, this hamster just might eat all my pharmaceuticals and I wouldn’t even know.
Miriam: He’s hiding it inside his mouth, he’s not actually eating it.
Me: Look, it’s going at it again! It’s eating all my sweets.
Miriam: Don’t let him eat all those sweets, he might fall ill.
Me: Okay.

I’ve been given custody of this hamster: 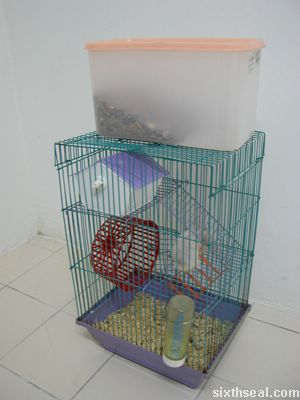 It’s living inside one of my bedrooms. I live alone, because I value
privacy, and I don’t sleep in the bedrooms but in the living room. I
would like to experiment with it one day, establish the LD50 values for
certain substances in hamsters or observing whether hamsters will
self-administrate certain substances. Just kidding, I won’t do that.
Heh. It’s fun to have around, going back after work and letting it out
and feeding it is fun to watch.

Farewell, Miriam! You will be missed. 🙂