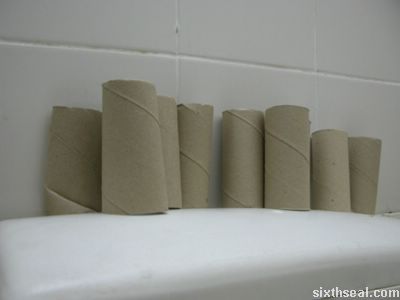 I have been going without TP for a week. I have daily bowel
movements so it’s a matter of some urgency, but I keep on forgetting to
get some on the way back from work. Anyway, on the day that I did
remember, I dropped by Ting & Ting Supermarket to get some rolls.
My financial status was rather dim at that time, so I was stretching my
RM 10 budget to include toilet paper, laundry detergent, and
toothpaste, at least until my paycheck clears.

That fateful day was on the 31st of March. I was debating between
the RM 4.15 generic sandpaper and the RM 4.95 Scott tissue. It was a
Mexican standoff, so I decided to get the other items first. I stood
there pondering whether to go for the RM 1 Fab mini pack or the RM 3
Kao Attack detergent before finally settling for the latter. I
proceeded to grab a RM 1.30 super mini tube of Darlie and went back to
the toilet paper aisle.

It was the “Softest tissue ever – 2 Ply” that sold me. I have
seriously considered ripping off magazine pages for my…er, washroom
purposes at the darkest moments of my toilet paper withdrawal. I
couldn’t bring myself to do it though, mainly due to the fact that I
doubt glossy paper would get the job done. I have my concerns about the
flush-ability of balled up magazine papers too.

I got the Scott and went to the checkout counter. I drove home, took
out my purchases and dumped them on the floor. That very night, the
porcelain throne called to me. I felt pleased, to tell you the truth,
anticipating the soft tissue caressing the cleavage of my posterior
instead of the usual “squeeze real hard to eliminate as many hanging
bits as possible before jumping into the shower” routine.

Alas, my precious 9 rolls of Scott was missing. It must be in the
car, I thought. Sadly, that was not the case, as it became painfully
clear when I checked the car. I was forced to go back to the squeeze
and shower method…I had to conserve my financial resources to
accommodate my various prescriptions (#1 priority) and well, other
things which I deemed to be more worthy of my budget than toilet paper.

Fast forward to today. I found out that my paycheck has cleared, so
I was determined to give my anus the proper treatment it deserves. I
went back to Ting & Ting and grabbed another pack of Scotts and
went to the cashier.

Cashier: Hey! I remember you. You left this very same item last time you came in.
Me: Oh? Er…yes, I realized that I left it here in my hurry.
I was disinclined to tell her that I forgot due to my benzodiazepine consumption
Cashier: Yeah, I actually ran out after you and called for you, but you didn’t hear me and drove away.
Damn benzodiazepines 😉
Me: Really? I must be preoccupied with work.
Cashier: Hang on, let me just get the pack.
Me: You kept it?!?
Cashier: Yeah, it’s in the side office, I put a note on it just in case you returned.
Me: Gee…thanks!
Cashier: Here you go, do you still want that other pack?
Me: Nah, I think 9 rolls would suffice. (grinned at her)
Cashier: (laughs) Okay, here, you don’t have to pay for this since you paid for it last time.
Me: Thanks for keeping it, that was nice of you.
Cashier: My pleasure.

I was pleasantly surprised that she kept it instead of just putting
it back into inventory and that she remembered me. My long suffering
posterior sends its appreciation too. 😉 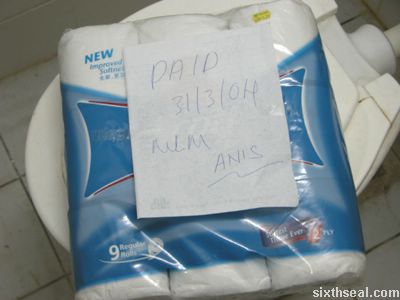 I once was lost…but now am found. Was blind, but now, I see.