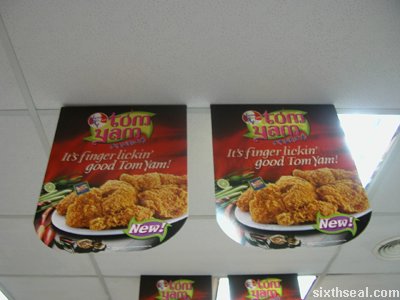 Tom Yam Crunch is the latest incarnation of the tried and true
Kentucky Fried Chicken’s…er, chicken. There’s now Hot & Spicy
(introduced in the mid ’90s) and Tom Yam Crunch in addition to Original
Recipe. There is no indication that Tom Yam Crunch will be a “limited
edition” run, so I’m assuming that it’s going to be fully integrated
into the KFC chicken menu. 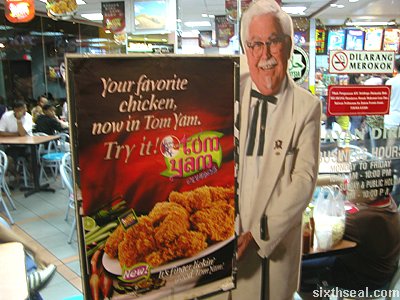 It even receives Colonel Sander’s approval in this promo runout. 😉
It goes “Your favourite chicken, now in Tom Yam. Try It!” I’m sure most
of you have seen the TV commercials about this as well. I can’t say
that I’m chomping at the bit to try it, since it seems to be just a bit
of spices thrown on a fried chicken, and that doesn’t inspire me to
make an immediate visitation to see how well it tastes. 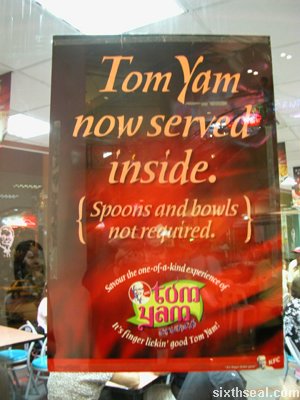 Here’s another one of the promotional posters…this one goes “Tom
Yam now served inside. (Spoons and bowls not required)”. I should not
have gone late at night during Labor Day though because the place was
absolutely packed. Nevertheless, we wrestled the hordes of hungry
patrons and placed our order for KFC’s new Tom Yam Crunch Chicken. 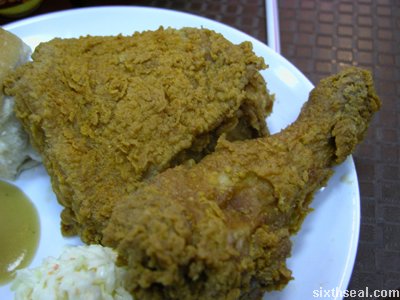 The first impression did not give any visual clues to differentiate
these pieces of chicken parts to the standard offerings. However, when
a bite was taken out of a drumstick – that’s when the Tom Yam taste
shines out. It does taste like Tom Yam! It’s remarkably similar to Tom
Yam. I’ll even go so far to say that if someone liquidifies the skin
and feeds it to me in a blind taste test with the other item being real
Tom Yam soup, I’ll have a hard time differentiating it! 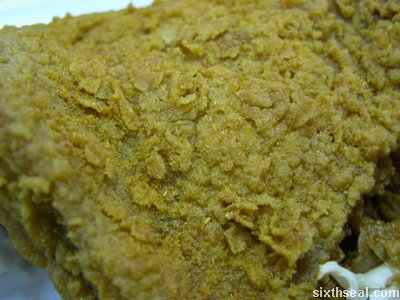 Okay that last bit was a bit too far, but you get my point. 😉 I
find that Tom Yam Crunch is a great addition to the existing flavours
of Kentucky Fried Chicken’s meat (which is exclusively chicken, this is
moot). It was spicy and preserves the Tom Yam essence with its skin.
Only the skin has the Tom Yam taste, the inside doesn’t. The macro
photo above shows the smattering of spices on the skin of a piece of
thigh. 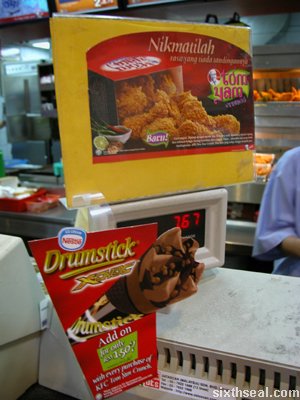 There is an existing promotion that sells Nestle Drumstick X-treme
for only RM 1.50 instead of RM 2.60 with any order of Tom Yam Crunch.
We opted into that promotion, I like the X-treme ice creams, it’s like
chocolate times two. 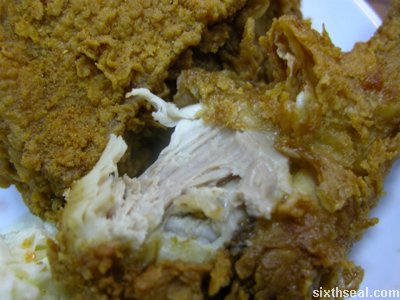 Back to the chicken, my girlfriend liked it as well, though she said
it was a little too spicy and she didn’t like the signature sourish
taste of Tom Yam that permeated this Tom Yam Crunch chicken.
Personally, I feel that it’s a great addition to KFC’s meagre stable of
chicken flavors. It’s faithful to the Tom Yam essence and yet manages
to strike a balance between that and the tricky bit of infusing a fried
chicken piece with that flavor. They did it well. I give it a thumbs up! 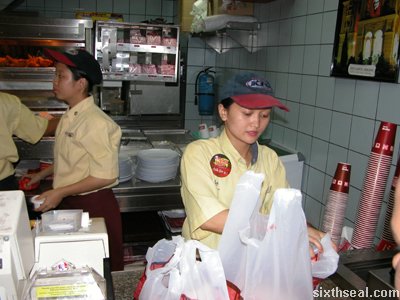