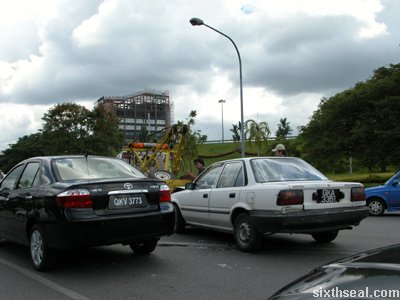 …and other rhetorical questions. There was a minor fender bender
that rendered this car unable to move on its own accord (no pun
intended) near the King Center roundabout. This resulted in a massive
traffic jam (it’s already an area prone to traffic congestion). It took
me a whole hour (!!!) to drive out that stretch of road that couldn’t
have been more than 400 meters. Fucking waste of time, if you ask me…

In other unrelated news, this fictional phone conversation happened just five minutes ago:

Me: Hey, x‘s phone is off, what’s up with that?
L: His phone is not off, he “ki chia” already.
*ki chia is a Hokkien word which can mean a variety of things. The literal translation is “go up car” and it can be used to mean:
1. Arrested by police.
2. Dead.
3. Mobilize/regroup.
In this context, it means #1
Me: What happened?
L: I heard someone dobbed him in, was arrested just last weekend in town.
Me: Okay, so who’s the new contact for ice (crystal methamphetamine) now?
L: Here’s the new guy.
(gives number)

Now, this is a piece of disturbing news, not just because Malaysia
has declared “Dadah Musuh Negara #1!!! (Drugs is the country’s #1
enemy) Yeah! Kami menentang puas puas dadah ini!!! Kami perlu gahmen
beritahu kami apa nak buat kerana kami semua bodoh bodoh and just
waiting for instructions, sir, yes sir!” and all that shit, but because
Mr. L has a reputation of dobbing in people when he’s arrested – giving
out drug dealer’s (and when there’s none, he apparently goes for drug users)
personal details in exchange for his own freedom. He apparently has no
qualms doing that, his bread and butter lies (no pun intended) in the
prostitution business and drugs are just his sideline, which he is
slowly distancing himself from. Now, given this information, would any
sane tweaker (it can be argued that the two words form an oxymoron –
there aren’t any sane tweakers out there ;)) pick up from the new
contact?