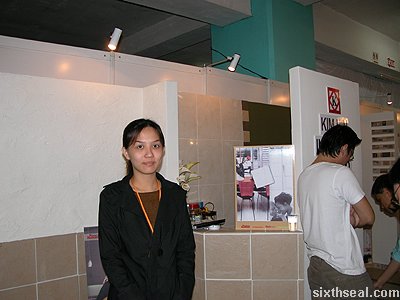 The term “booth babes” is a totally un-politically correct term, so
we’ll use the phrase “aesthetically pleasing female liaisons” instead.
I’ve been in this convention for several days – tomorrow is the last
day. This is the Best of Show – Janet Lim from Kam Kam Sanitaryware Sdn Bhd (a subsidiary of Kim Hin). She’s the Sales Officer, or so I gather from her business card. 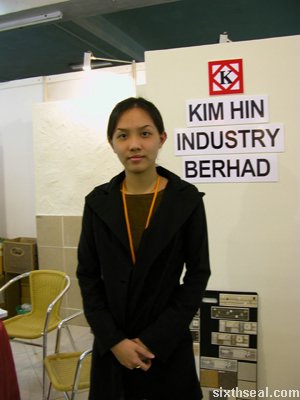 Of all the females in the show, I immediately noticed her – she’s
the one with the looks, the attitude (though that dissipates when you
talk to her), and…well, this is a difficult topic to approach without
seeming like a pig, so I’ll just say it once and for all – Janet Lim is
absolutely fabulous, the best female in BTS 2004 in my eyes.

I wanted to take a photo of her since the first day but I didn’t get
around to it until today. I think she was sick of me approaching her
for photographs/videos – I think I did that 5-6 times coz I wanted a
really good shot of her and my coworker Deng was going on about how my
photography doesn’t capture her beauty in real life. Oh, and the last
time was when I was totally ethanol impaired…now that’s a good
impression. *shrugs* 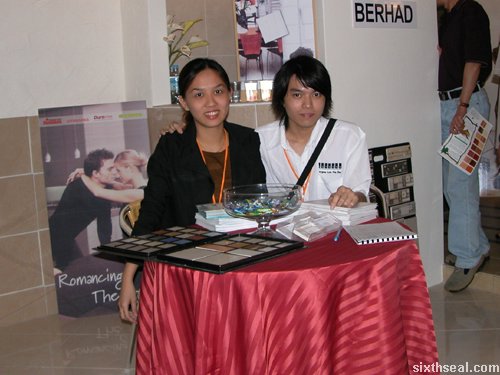 Gorgeous isn’t she? My apologies for “spoiling” the photo with my
less-than-pleasant mug. I would say “/me drools” but then that wouldn’t
sit well with my gf, so I’ll refrain. 😉 Oh shit, come to think of it,
I wrote down my blog’s URL in my business card when I passed it to her
– I hope she doesn’t see this… 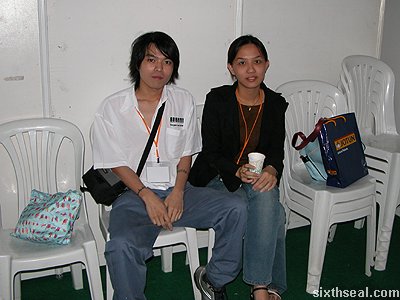 Last shot, I was ethanol impaired while this photo was taken…

Nevertheless, I won’t be posting up the videos and other photos of
her – that’s my personal collection. :p I probably would go out early
tomorrow and develop the photos I promised to several people though-
just shove it into one of my smaller CF cards and pass it to a photo
studio. Come to BTS 2004 – see Janet in real life, I haven’t seen a
more elegant (old skool word, but it fits) person in ages.

Right, here’s the other BTS 2004 female booth personalities (it’s so hard being PC nowadays, I exhaust my thesauruses): 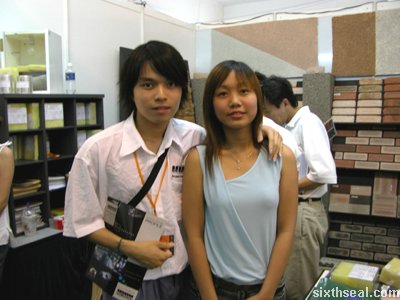 This is our booth neighbor Loh. She won’t be coming tomorrow (it’s
her last day) so I told her I’ll mail her photos to her. Come to think
of it, I’ll just pass it to the booth management. 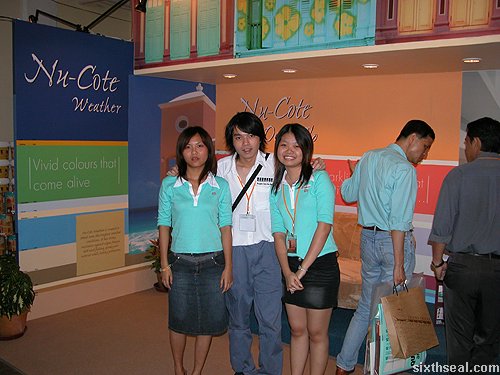 These are the girls from Nu-Coat. I didn’t get their name too, it
was a busy day today, so I had to run and shoot and get back to my
booth (before getting pissed at the end of the night though). 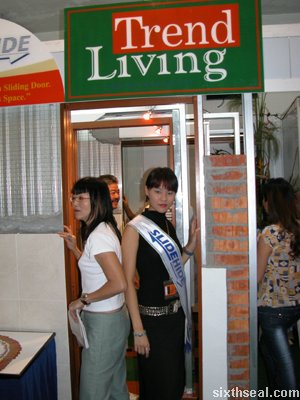 Here’s the girl from SlideHide. Much props to her for being
friendly! She’s great! They have these concealable compartments that
would be perfect to keep your dru…er, items,
concealed…except the law enforcement officers here are too smart for
that shit. You know what they do when they raid your residence? They go
through the ceiling boards and toilet cistern – most obvious places of
concealment. That is why I put my stuff in plain view – I reckon
they’ll be looking too hard for concealed drugs to see the stuff that’s
not concealed. 😉 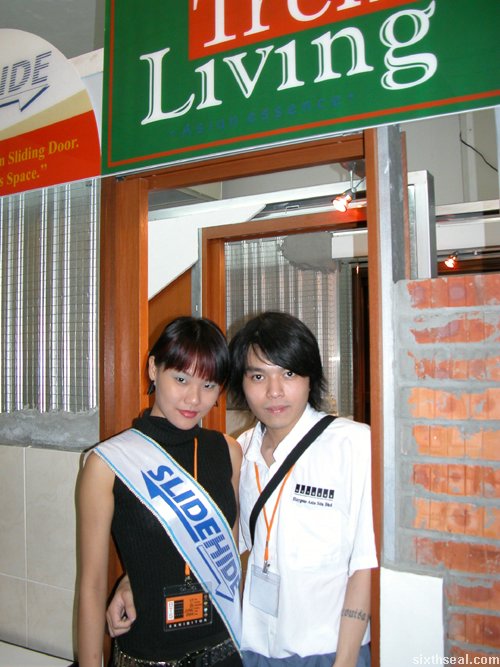 This is a photo of me with her. I took several (again) coz the
previous ones didn’t come out so well (people walking into the frame
etc) – thanks for being a good sport! Cheers! 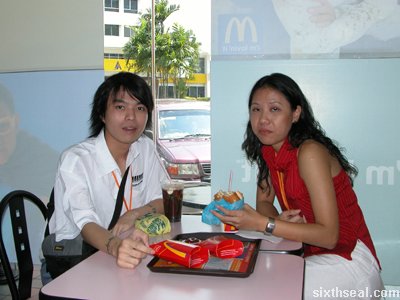 Okay, back to the convention stuff – here’s lunch with Deng at
McDonald’s. They have a promo going on where you get a McFloat for
McFree with a McChicken at no extra McPrice. Yes, that is my Xanax Face
(TM) – try and pitch rude strangers and tell me you don’t need some
chemical assistance without resorting to unacceptably violent measures.
Xanax is good. My friend, I would not have apologized if I wasn’t on
benzodiazepines, you high and mighty fuck. Retaliation beckons, please
don’t let me see you in town when I’m not representing the company. I
digress…

Anyway, we take turns for lunch, I like going with Deng, she reminds me of a friend I have. 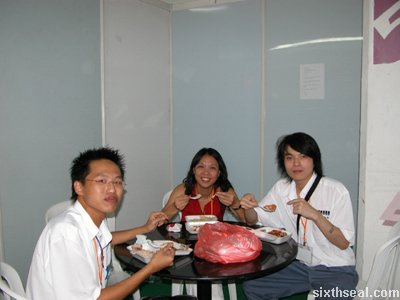 This is dinner…at the discussion area booth beside our booth…we have a RM 50 meal allowance from the company.

We have two videos today, one of the last route inside and another of the outside exhibition area: 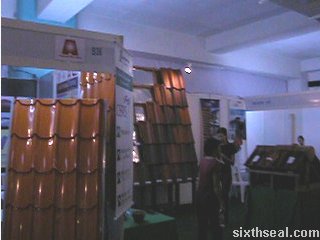 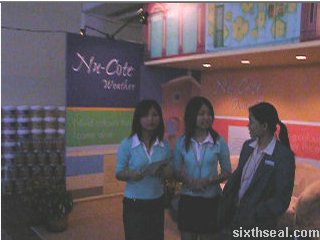 Tomorrow is the last day of BTS (Building and Trade Show) 2004 – come and visit booth S6 and I’ll feature you on sixthseal.com.

…but only if you say so, I don’t know who you are if you don’t identify yourself.

The night ended with an open bar for all exhibitors…drink, regurgitate, repeat. :p 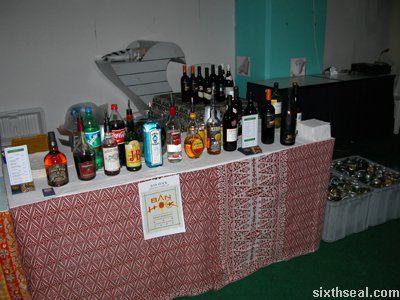 Now, I’m worried if I said things I shouldn’t have said about
veritas’s private life in front of management while under the influence
of ethanol…

Phrase of the Day: (hushed tones) Listen
mate, I’m just doing my job here. I’m representing my company at this
expo…don’t make the mistake of forgetting that after all this, I’m
just the average guy on the street. I will not hesitate to get a bunch
of my friends to smash your face into pulp if you try and start shit
again. I’ll tell you straight out…right here, I’m the silent and
apologetic company representative, but after I take off my shirt, I’m
the Ah Beng you see on the streets. I urge you not to piss me off, my
friend. This expo does not last forever and you do not want to piss me
off, lest you run into me at night. Do we understand each other? Good.
I’m Huai Bin, the systems engineer here…don’t hesitate to call to
email me or even call my cell phone if you have any tech related
questions. Thank you for your time, sir.