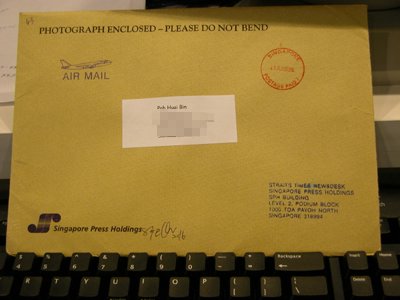 I received a print copy of the article this blog’s URL appeared in,
courtesy of The Straits Times (The Sunday Times), Singapore Press
Holdings. It came in a cardboard reinforced envelope today.
sixthseal.com was mentioned in an article in The Sunday Times
[sixthseal.com] last week. I wrote an email to the author of the
article with my opinion and also to request for a hard copy of the
article and they obliged and gave me a free copy. Thanks! 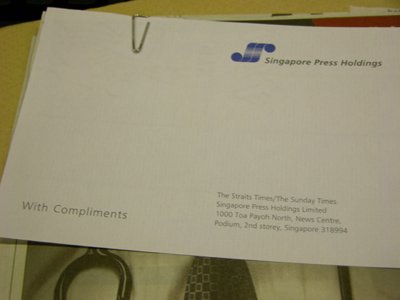 The two pieces were clipped with a note saying “With Compliments – Singapore Press Holdings”. 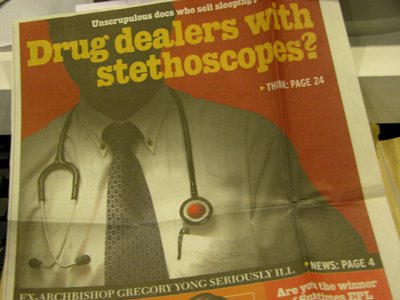 This is the front page of the paper, where the blurb was. 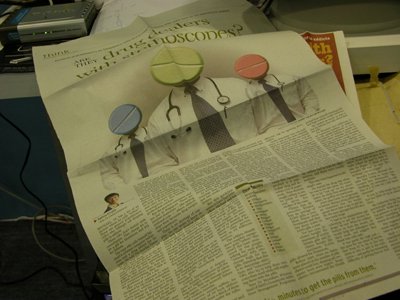 This is the main article – it spans a whole page. 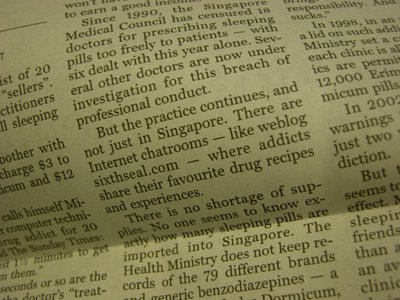 This is the bit where my blog was mentioned. 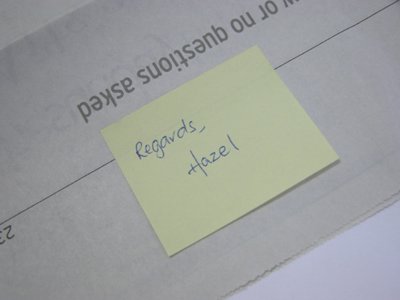 Hazel [soundingblue.com] also sent me a copy, thanks for that!

Any publicity is good publicity! 😉

This is the email I wrote for anyone who’s interested in reading it:

Hello, this is Huai Bin from sixthseal.com. One of my readers notified me of the blog’s URL appearing in your article.

Anyway, a lot of benzodiazepine users do have an existing issue,
which makes them prone to self-administration and the escalation of
dosages as needed.
Granted, this is dangerous behavior as benzodiazepines are physically
addictive and to quit “cold turkey” after a prolonged period of
consumption may result in life threatening seizures, much like acute
alcohol withdrawal, but worse.

Personally, I do have social anxiety disorder, I’m constantly
worrying about what others are thinking about me and those thoughts are
usually delusional and paranoid in nature. Benzodiazepines have helped
me a lot – I’m more comfortable around people, that helps me
communicate better and I find that I’m more productive at work.

Your article seems to paint a negative light towards self-medicating
people like us. It’s understandable, I feel strongly about certain
issues too. However, if you don’t mind, let me voice my opinion on the
line:

Brutally honest, Michael admits that being on drugs has stunted him
emotionally: ‘My thinking, my personality, it’s still that of a 16 year
old. I still throw tantrums.’

I have to say that this is a classic benzodiazepine rebound side
effect after bzd dependant people quit. It’s due to the way benzos work
– they bind to the bzd receptors in the GABA region of the brain, which
regulates, amongst other things, sleep and acts as a natural agent that
calms people down.

“Michael” is not throwing temper tantrums and being “emotionally
stunted” or immature. He’s just agitated because the brain is used to
having benzodiazepines binding and activating the GABA in the brain,
and now it’s not.

An analogy of this would be someone driving down the road, relaxed,
when another driver swerves in and cuts the driver off and provokes the
driver by preventing any attempts to overtake the offending vehicle.
The driver is stressed out – GABA production is unable to cope with the
stress hormones, and thus, they get angry and would probably “throw a
tantrum” or do something violent.

In time, the effects are reversible and the brain grows to expect
less and less bzd receptor binding and GABA production, though this
usually takes a while (years) before it returns to normal levels, which
is where the importance of tapering (slowly reducing doses over a
period of a year or more) comes in.

Benzodiazepines, like alcohol, acts as a disinhibitor. It’s unfair
to portray benzodiazepine users as criminals and petty thieves.

Alcohol is another GABA agonist (it enhances GABA production) – it
would be accurate to make allusions towards alcohol and benzodiazepine
dependency, as they work basically the same way, by (in)direct GABA
stimulation, just like the barbiturate group of drugs before
benzodiazepines.

To single out benzo users as somehow more prone to commit crime is,
forgive me for the use of this term, just spreading fear, uncertainty
and doubt (FUD, I’m sure you’re familiar with this phrase). The
tendency has to be in there in the first place for it to happen.

It won’t turn church going Christians into deviant rapists
overnight…unless, of course, they were already suppressing that urge
in the first place. It’s just a disinhibitor, like alcohol, no more, no
less.

Anyway, I thank you for reading my email and cheers for mentioning
my blog’s URL in your article, although I would have described it
differently. 🙂 I never meant for it to be a forum for drug recipes, I
do not respond to chemistry related questions. However, intellectual
discourse is encouraged, so long as no dealing or soliciting is going
on.

Thank you for your time Salma, and if it’s not too much to ask,
could I have a copy of the print edition of The Sunday Times on 20th
June 2004 (the one with your article)? My mailing address is:

I will be willing to pay for the postage and your trouble. Please
get back to me if you can, I can be reached at me@sixthseal.com and I
would appreciate it if you could get back to me about the status of the
print edition.

Thanks for your time, Salma, and have a nice week ahead. 🙂

3 thoughts on “sixthseal.com in The Sunday Times, Print Edition”