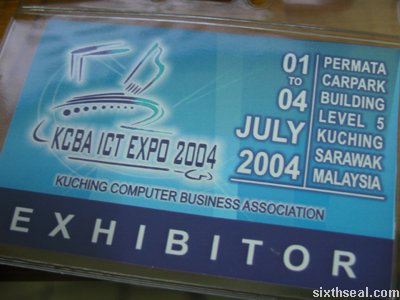 Today was the last day of ICT 2004, Kuching. It has been a great
expo – I had more fun than in the previous one, although the company
benefited more from the previous expo coz this one doesn’t attract our
target market. I’ve just returned from packing up all our stuff and
moving it to the showroom and here’s the writeup of the final day of
ICT 2004. 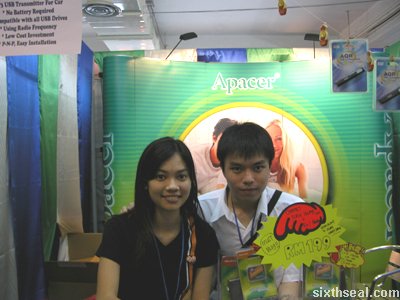 This is Ivy from the booth opposite ours. I’ve got to know her
during this expo, and I’m glad I did. She’s really nice and seems to be
happy all the time, a quality I very much admire, since I’m severely
lacking it. She reminds me of one of my friends. Here’s a short clip of
me bothering her with my digicam. 😉 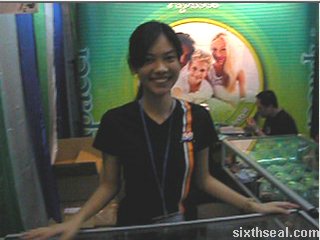 That gives a better picture of what she’s like, photos doesn’t preserve the character of someone. 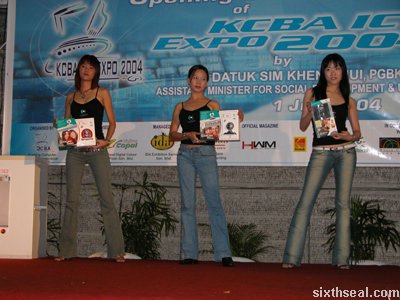 This one is for the male (or female, if you swing that way) readers.
The same three models, this time with the theme “Logitech girl”. I
didn’t enter the contest though, coz I had to fix the network problem
at the booth so I left without entering. 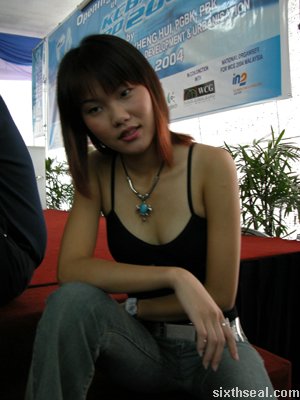 Here’s a pre-session photo of Shirley. We talked about which photo I entered yesterday for the Kodak contest. 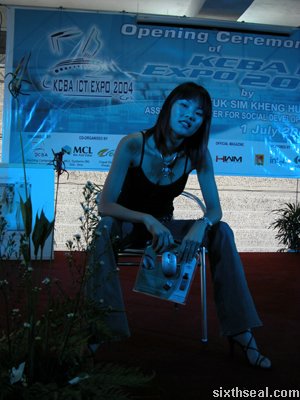 Again, I mainly took photos of Shirley – she’s the one with the sex
appeal (easy to see from the pre-shoot product demonstration) and she
has a great personality. 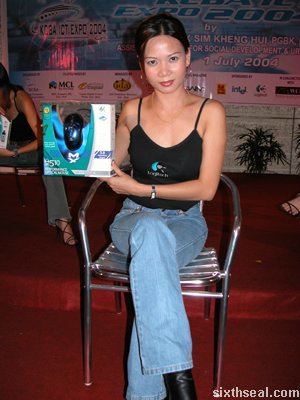 This is the second model. She’s a little too “stiff” and
self-conscious, IMHO. She’s alright in the looks department, but she
needs some help in other aspects. I find it hard to work with her – she
the type of model that poses the way she wants, not the way you want. 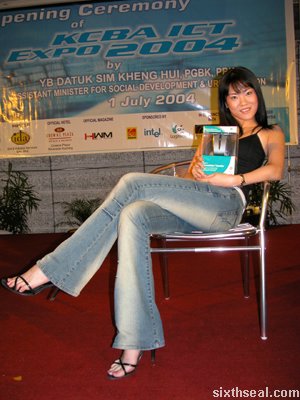 This is the third model. She’s not hard to work with per se, but
she’s more of the “girl next door” type, personality wise. I do not get
the feeling that she’s 100% comfortable with her body. 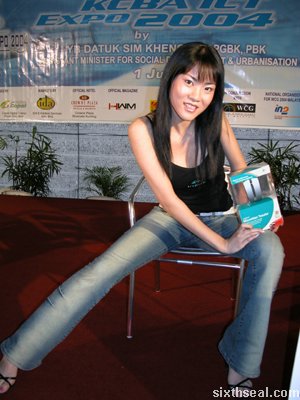 Here’s another shot of the third model. She seems to be popular with the other photographers, for reasons which elude me. 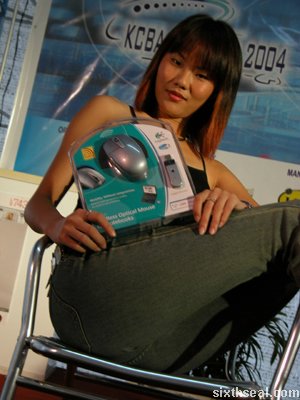 Shirley, on the other hand, is comfortable with her body and much
easier to work with. There’s no self-consciousness in her poses, which
is good. 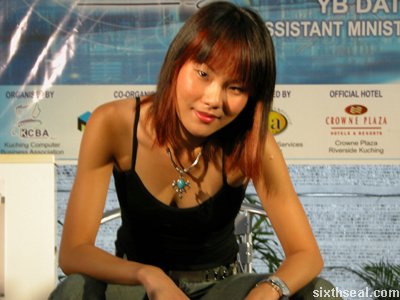 Here’s a close-up of her. I would have entered this for the
competition, except I had work to do. The photo doesn’t have the
Logitech product in it, anyway, but I thought it was a good one, told
her to bend down a bit for a shot with more sexual appeal and took it
at body level (instead of from above, which would make the photo look
undignified instead of provocative – a fine line to toe).

Anyway, like I said, I didn’t enter the contest this time coz I had
to run back to the booth. I did not win the Kodak contest either, but
IMNSHO, the winning entry wasn’t good at all – it was washed out and
unfocused. There were heaps of other more deserving entries (not mine,
this time they were pros with digital SLR’s fitted with the proper
lenses), but I’m not the judge anyway. I had a very similar photo
though, and I didn’t even think about submitting it. 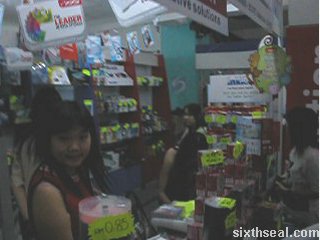 This covers Hall B, the outside hall. The customary daily walk through, this is the final one. 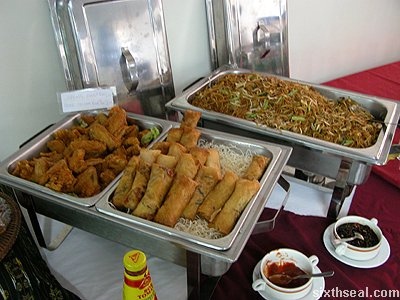 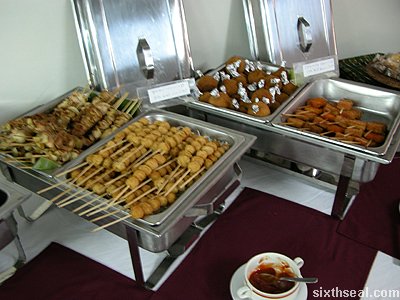 The canteen was stocked with food from Kikyo-Tei, a Japanese
restaurant, but it tasted terrible…typical sloppy convention food. 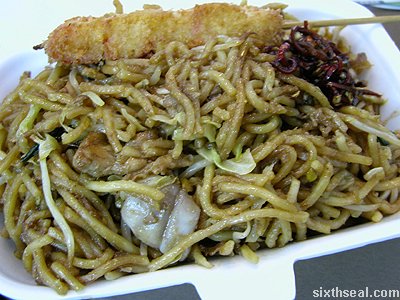 …which I had to eat anyway due to a booth manning shortage. 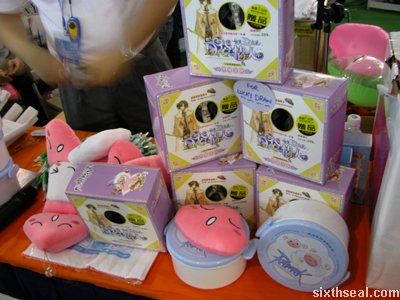 This booth is just to the side of us. I’ve been looking at the cute
balloons with a less than benign eye for a while, but something else
caught my attention – a plush pink one with the same design! It was
even better than the balloon. I got it in the giveaway. 🙂 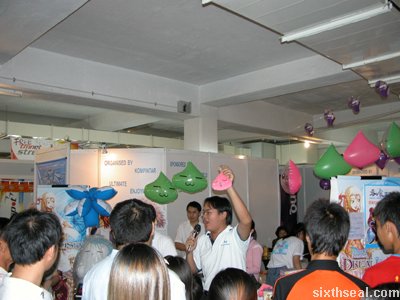 It was the first item up and the question was “What booth is RO
occupying?”. The first guy who answered got it wrong, and I stepped up
and said “19-23”, which was a wild guess, and the wrong answer, as I
later found out when I looked at the map. However, props to the RO reps
from Penang, they knew I wanted it (asked if it was for sale
previously, it wasn’t, it was for the contest) so they let me have it. 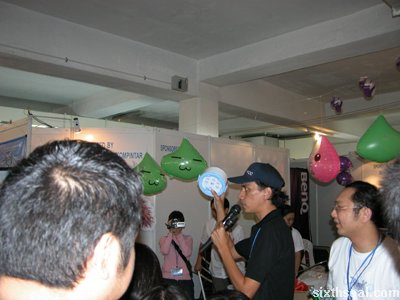 The MC was going “Is that the right answer?” to the RO reps, and
they said “Give it to him”, even though I was wrong (didn’t even say I
was wrong, though they didn’t answer then the MC asked if it was the
correct answer, coz it wasn’t). Cheers! 🙂 It’s the one that everyone
wanted, it’s just so cute! I said so too, I went “Thanks, this was what
I wanted.” 😉 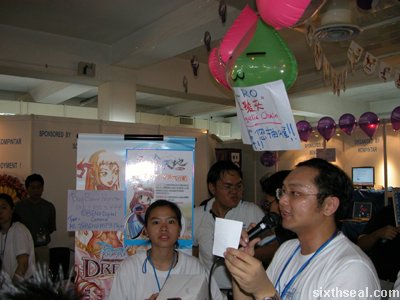 They were giving away all sorts of RO merchandize from lunch boxes
to jackets. However, that’s the lucky draw prizes though – you need to
buy something to be eligible. I did get an RO pen from the group
contest where we were divided into three groups and see who could
collectively shout “RO” the loudest. 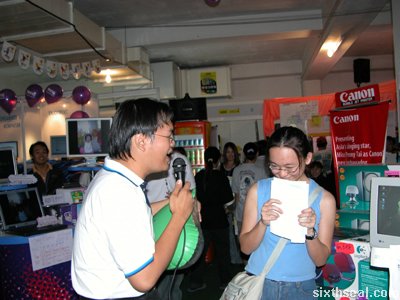 Our group was by far the loudest one, everyone was enthusiastic,
joining in for good fun. I was offered more pens later though, but I
declined coz I just wanted one. I did ask for a poster (which was
supposed to be a giveaway) but the girl (same one I took the photo with
on the first day) was kind enough to just give it to me. 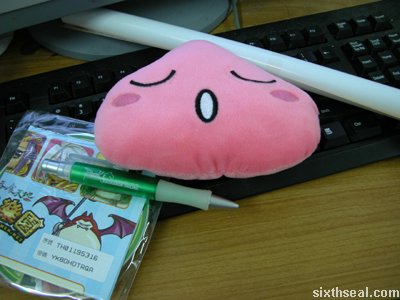 This is the RO stuff I got…I don’t know what the CD is, it’s given free to everyone who passes by their booth.

Other points of interest 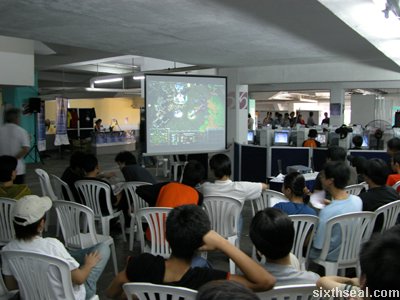 WCG 2004 East Malaysia preliminaries were held and finished today at
the expo. I don’t know the results, didn’t follow the games. I noticed
it had ended when I saw this group of people sitting around watching
the winner’s recorded game. This is Warcraft III: Frozen Throne. The
winners were announced after the photography contest, but I didn’t
stick around for that. 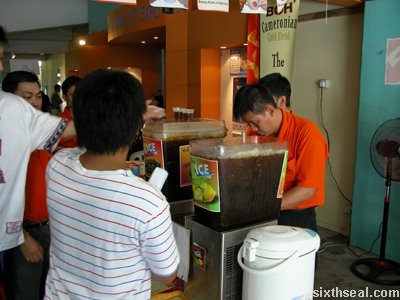 Free Boh iced tea. I finally just took my big water bottle along and
asked nicely for them to fill it instead of taking one small cup after
another. They were kind enough to oblige. 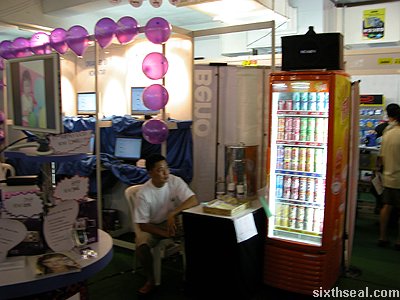 BenQ wins the Most Ingenious Profit Generating Idea award. They were
selling sodas right inside their booth. It was popular – I had several
Vanilla Cokes myself. 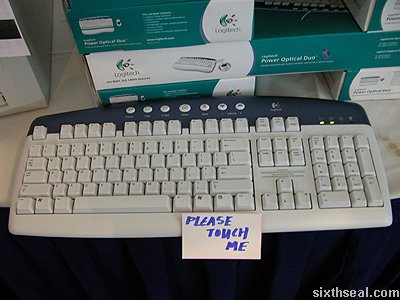 This keyboard that has a “Please touch me” sign. It’s just so wrong on so many levels… 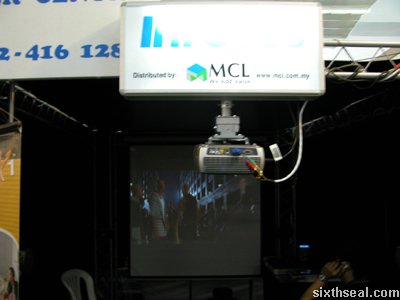 There was a projector showing The Fast and The Furious over and over
again in the booth a little to the left and opposite ours. It was
entertainment, but I watched it so many times, I swear I can memorize
half the script (not the full script, Ivy, but I’m getting there, and
if the convention went for much longer…). I had hoped that they would
show Finding Nemo (which they did for a little while in the first day),
but they went back to The Fast and The Furious…turns out that it was
the only licensed DVD they had, when I asked. We had taken to calling
the movie “Too Much, Too Furious!” by the end of the expo.

Jesus, I can see Vin Diesel in my dreams… 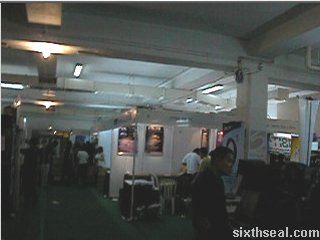 This is one to cap off the expo…it shows the exhibitors packing up. ICT 2004 – a great expo, and a fun filled four days.