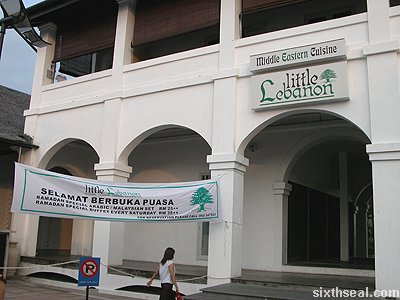 Little Lebanon is the premier restaurant serving middle eastern
cuisine in Kuching. It’s located in a very central location and it
currently has a Ramadan Berbuka Puasa set meal promotion for RM 25++.
Little Lebanon is a very popular eating establishment and is frequently
fully booked. 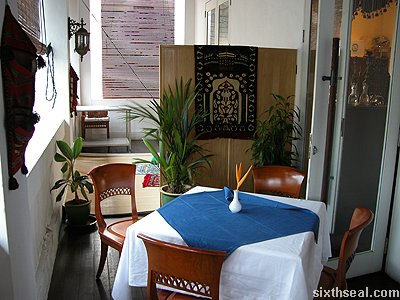 There is an al fresco dining area lining both balconies and nice
indoor seating as well. There is prayer mats aligned to Mecca to the
back and we saw several customers utilizing this commodity before
breaking fast. It’s the fasting month for Muslims now and there are a
lot of places vying for the lucrative end-of-day breaking of the fast. 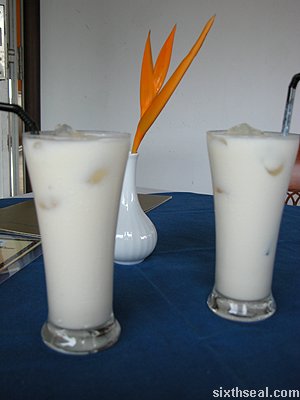 We arrived early so we had to wait for about half an hour before
dinner was served. We had fresh yoghurt drinks while we waited for the
meal. It’s offered in sweetened and natural options – I would recommend
the natural, unsweetened version. It’s almost pure yoghurt, thick and
filling. Divine! 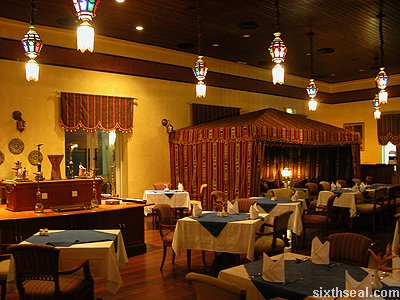 Little Lebanon comes to life at about 7 pm…the interior lights are
turned on; everything is ready for the patrons, the table linen all
done nicely. Notice the Sahara tent in the middle? It’s a huge private
dining area for large groups – there’s room for 20 people in there.
It’s the prime dining spot in Little Lebanon. 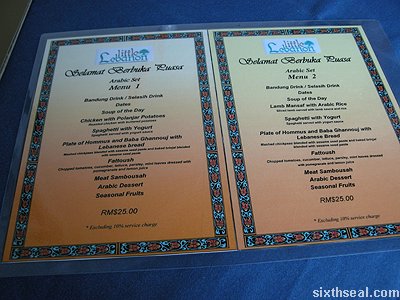 There are two choices for the Arabic menu in the Little Lebanon –
the main difference is in the main…chicken or lamb, something that
reminds me of long haul flights. 😉 There are also two choices for the
Local menu, but people don’t go to Little Lebanon for that, we’re here
for Middle Eastern cuisine, so we went for the Arabic menu. Both Menu 1
and Menu 2 were ordered to provide the best variety. 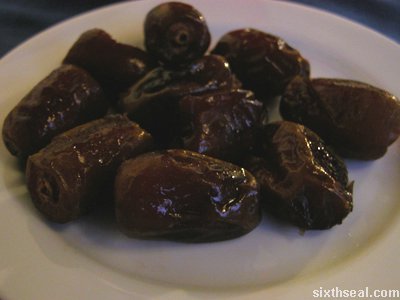 This is the first dish that came out – dates or kurma. It’s good –
the seeds are not as large as the ones I got the other day. It’s
customary to break the day’s fast with kurma (dates). 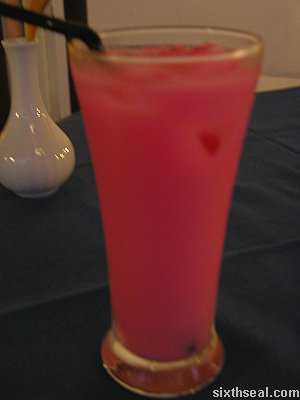 This is a local favorite. It’s rose syrup with evaporated milk. It’s
creamy and thirst quenching at the same time. There are two options in
the menu – bandung drink and selasih drink. 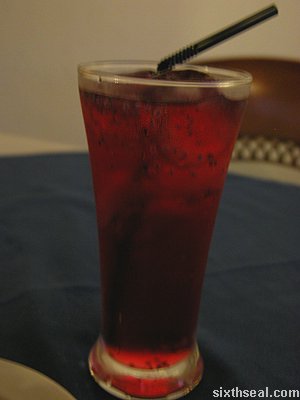 I’m not familiar with this one, but its very thirst quenching. It
seems to be a cordial of some sort, with jelly that looks like passion
fruit seeds.

Soup of the Day 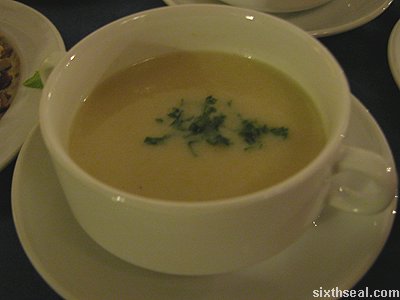 This didn’t come out from a Campbell soup can – it’s made in house. It’s good, real soup, creamy and hearty.

Plate of Hommus and Baba Ghannouj with Lebanese Bread 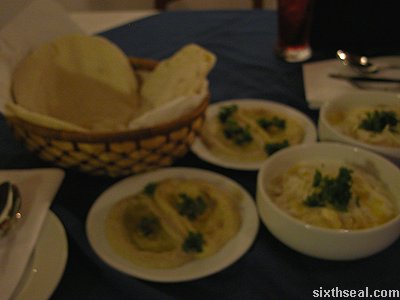 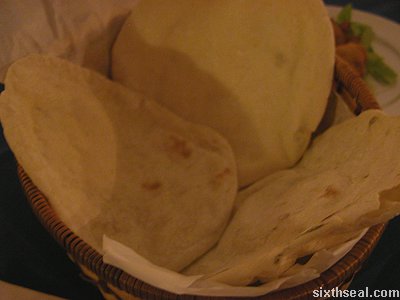 It’s baked bread, with an interesting crispy/chewy texture that’s
unlike any other I’ve ever had. It goes very well with the two dips. 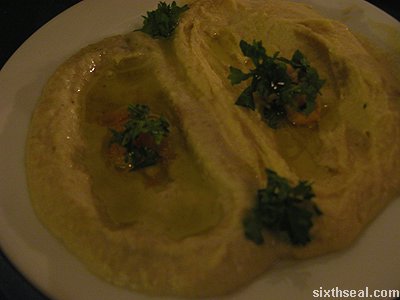 Mashed chickpeas blended with sesame seed paste and baked brinjal
blend. This is easily the best dish coz I like bread. I like oven baked
bread even more. Oven baked bread served hot is tops in my book. 🙂 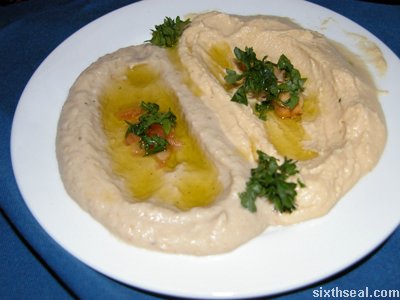 This is a photo of the two dips taken with flash. I love the
presentation – the way they got the oil into the middle of the dip
intrigued me. It’s good, soaked up very well with the Lebanese bread. 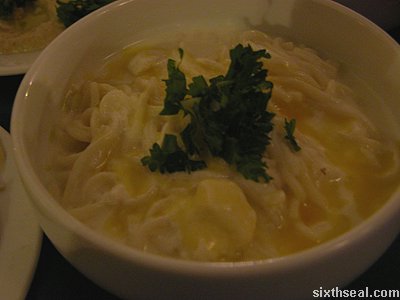 This is an interesting appetizer…it’s a cold dish of spaghetti
cooked with yogurt and yogurt only. The spaghetti is done al dente and
the yoghurt sauce makes the whole appetizer cold. 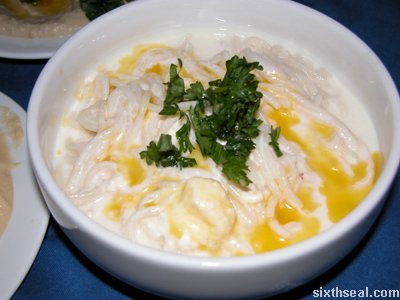 Here’s what it looks like, taken with flash. It’s interesting, that’s for sure. It’s cold. It’s sour. It’s different! 🙂 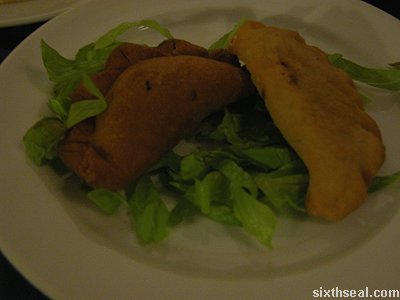 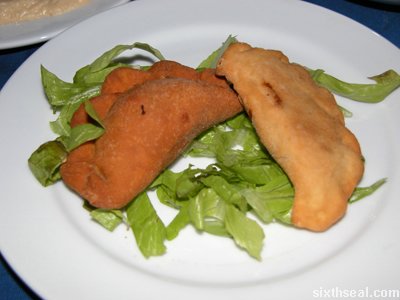 Here’s a photo with flash, this warm sambouhsah is a nice item on
the menu since it came after the warm Lebanese bread and cold Yoghurt
Spaghetti. It’s a hot item again this time and this hot-cold-hot
appetizer leading up to the main meal is a very interesting decision on
the chef’s part. 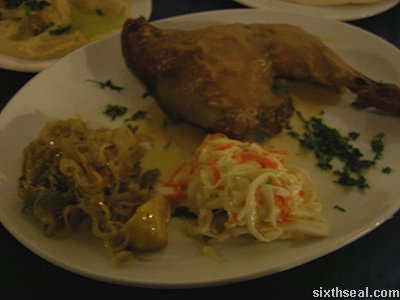 It’s described as roasted chicken with buttered potatoes and that’s
not too far from the dish’s offerings. It’s given a Middle Eastern
twist with the unique blend of herbs. It also came with a side serving
of what looks like coleslaw, but isn’t. 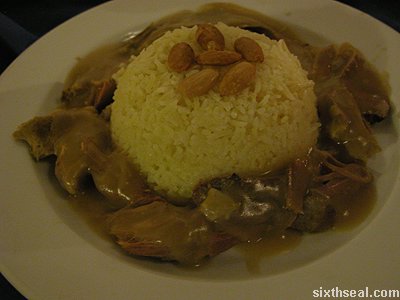 This is the difference between Menu 1 and Menu 2. The lamb is served
around the rice, it’s good, cooked in some kind of creamy stew. The
Arabic rice has some mixed chopped nuts topping it up. It’s dubbed as
sliced lamb served with lamb sauce and rice. It’s good. This one has
more of a Middle Eastern twist to it than the Chicken. I’ll recommend
the lamb. 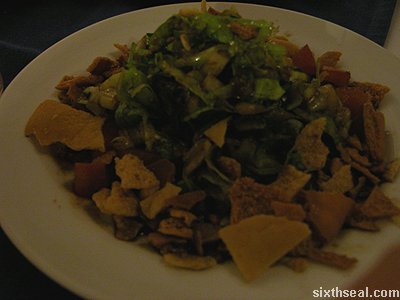 Finely chopped tomatoes, cucumber, lettuce, parsley, mint leaves
dressed with pomegranate and lemon juice. It’s an acquired taste,
that’s all I can say. You can’t really see anything from the ambient
lighting so here’s one with flash: 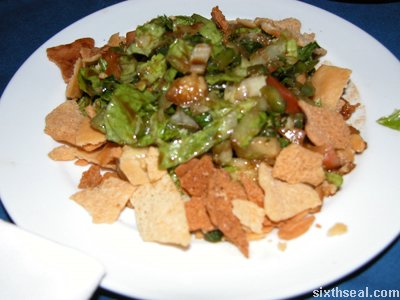 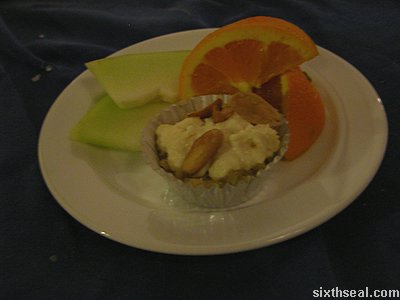 This is the dessert to end the, er…interesting course. The Arabic
dessert is some sweet concoction which I can’t put my finger on and
there’s some fruits served to the side. 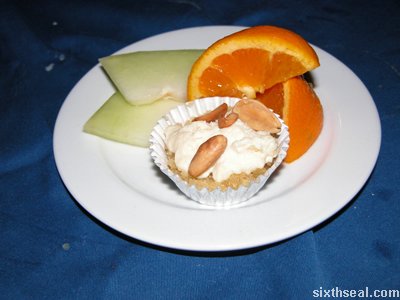 Here’s a clearer but more washed out picture taken with quick flash. 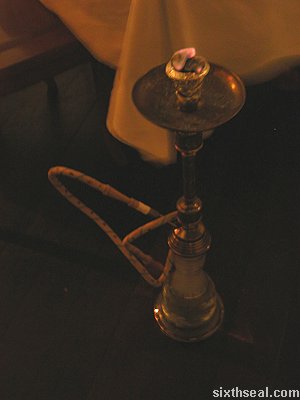 We were offered sisha during the dessert
and this, to the best of my knowledge, is the only eating establishment
that offers sisha in Kuching. I immediately agreed – there was an
option of various fruit flavors and we went for the mixed one. Sisha
looks like a bong, heck, it is a bong, but the cone doesn’t have anything psychoactive inside. 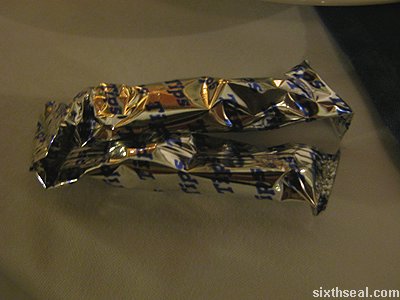 There are two filters provided with the sisha for hygienic reasons. 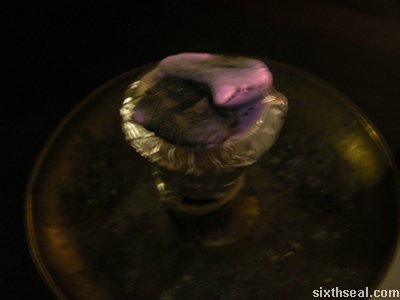 Sisha is like a bong, except the smoke you’re inhaling is fragrant
incense. The fruit mix is a good choice, it’s a nice fusion. There’s no
nicotine or anything psychoactive in there, so don’t expect to get
anything out of it, but there’s something about smoking sweet fruit
smoke while talking and relaxing with a great view of the city… 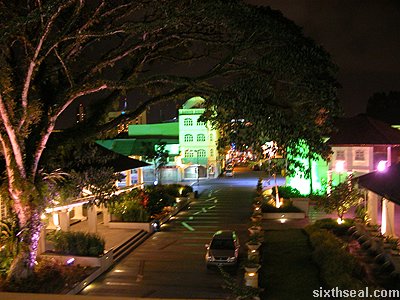 …it’s simply divine. Sisha seems like a popular choice here,
there’s at least one to every table. It only costs RM 12. Highly
recommended! 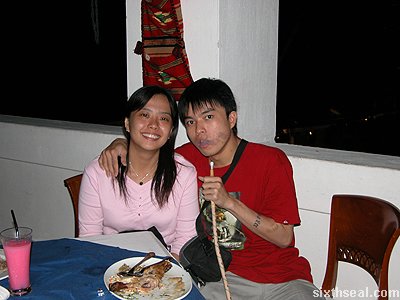 This is a farewell dinner of sorts for Bernice before she goes off
to KL. Little Lebanon is a nice place and their Arabic Berbuka Puasa
set at RM 25++ is a great deal. This time of the year is the best time
to try out the promotions going around as it allows a wide range of
dishes to be sampled for the breaking of fast ritual. 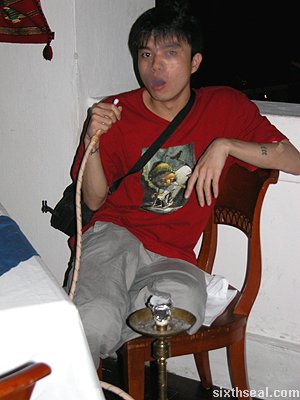 Peace be with you all, my dear readers… 😉