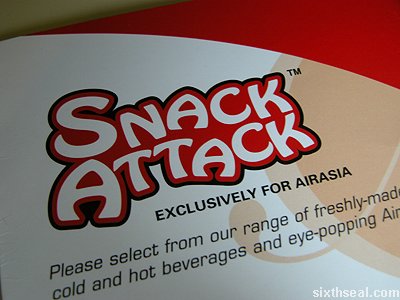 Snack Attack is the Air Asia on-board outsourced cuisine (if you can call airline food cuisine). I have tried the Snack Attack Chicken Congee
[sixthseal.com] before and it seems that they switch their menu items
once in a while and that one didn’t quite make the cut coz I didn’t see
it on the menu this time. This was on the trip to KL, I had wanted to
review the Snack Attack menu for ages. 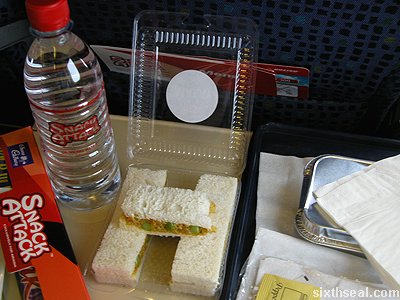 I had not eaten for a full 52 hours (I counted, statistical variance
of +- 30 minutes) in preparation for an all out attempt to tackle the
Air Asia’s prohibitively priced, bland tasting but yet strangely
attractive on-board offerings. This budget airline sells food and
merchandize on board, much like some US carriers do. Malaysian Airlines
provides food for free. 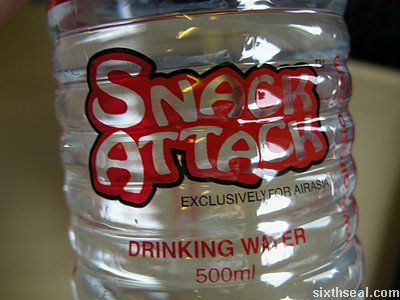 I first attempted to hydrate myself with their Snack Attack reverse
osmosis water, “exclusively for Air Asia”. It tastes like water. Hey,
what did you expect? 😉 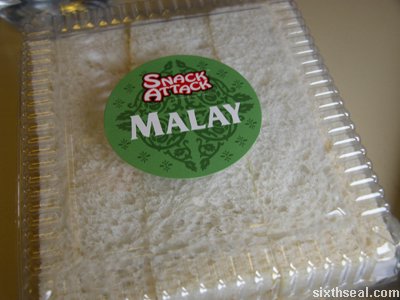 The Snack Attack menu of sandwiches consists of 3 types of
sandwiches in 3 different categories – Western, Asian, and Malay. There
are three subgroups under the Malay sandwich banner, namely, Sambal
Anchovies, Chicken Satay, and Vegetarian Samosa. I went for the last
one. It comes wrapped in a square sandwich box. 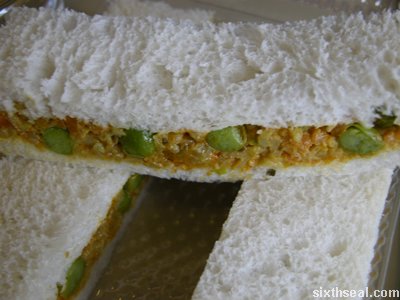 Here’s Vegetarian Samosa sandwich in all its…er, glory. It’s cut
in three horizontal strips but didn’t taste all that bad. Or maybe it
was coz I was hungry. 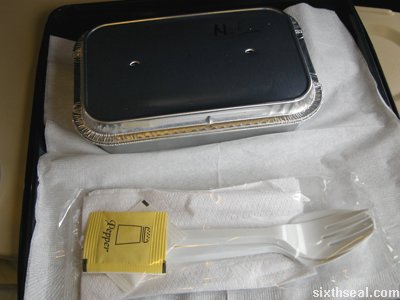 This is the nasi lemak (the only substantially filling item on the
menu) from Snack Attack. It has no logo, just a barebones classic foil
container which retains heat. It tasted as sad as it looks. Oh well, at least the plastic spoon and fork didn’t break on me…I count my blessings. 😉 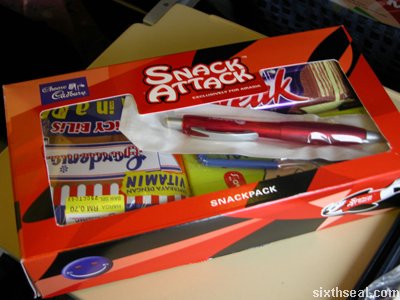 The Snack Attack menu describes this box of goodies with the tagline
– “Want a little of everything? How about our SnackPack with a tasty
savory, Cadbury chocolate and beverage. We’ve even thrown in a FREE
Snack Attack Pen!” 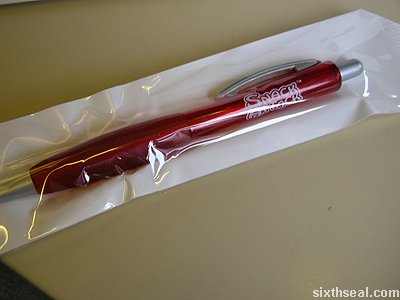 Here’s the free Snack Attack pen, which I promptly misplaced. I had to wash all that down with a bottle of mango juice…which tasted like generic mango concentrate diluted with water.