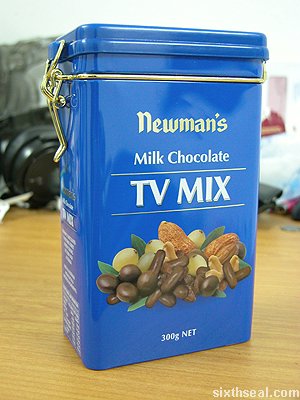 The most interesting about the TV Mix blue tins of chocolate from
Newman’s is the solid and well made build quality. The experience I’ve
always had with (suffix/prefix) TV snacks have always been slightly
disappointing with regarding to the aesthetics. Case in point: Arnott’s
TV Snacks with cardboard boxes. It shouldn’t need a fancy container,
really, coz it’s likely to be consumed while watching that episode of
The Sopranos, but still… 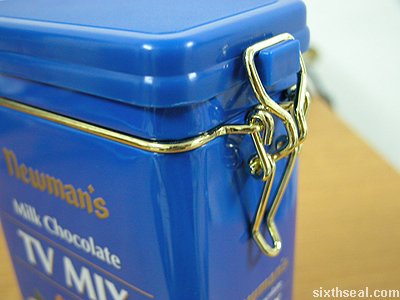 Newman’s, now, they went at it in a whole new approach. The Milk
Chocolate covered assorted TV Mix chocolates is housed in an impressive
Colonial style (actually I don’t know what art/masonry influence period
it came from, I just pulled that out of my ass) metal housing, complete
with a fully functional gold latching system that looks archaic, but
pleasing, at the same time. 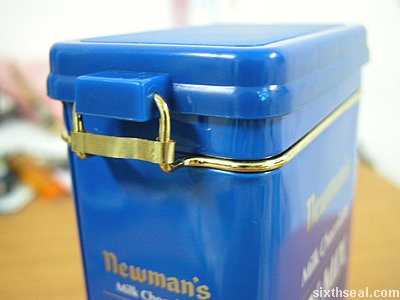 The latching gold piece with a hinge goes around the circumference
of the Newman’s milk chocolate TV Mix metal box and functions to secure
the container when it’s not supposed to be ajar. The latch piece and
cool metal box of these chocolate TV Snacks makes it a pleasure to just
put it on my lap for easy access whenever I wanted one of the chocolate
covered snacks. 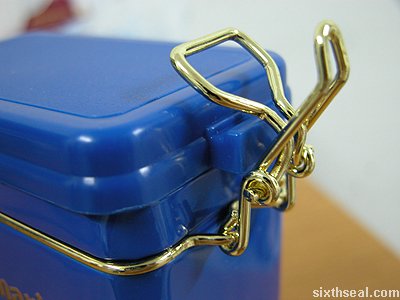 The push down and flip up double action golden latch piece is
intuitive to use and did not cause any accessibility problems with the
chocolate. The solid feeling latch opens with a satisfying click and
flipped shut using the same mechanism too. The gold latch manages to
stay shut every time with no degradation in terms of wear and tear
despite the much higher than average times it was flipped open, just to
feel the latch and hear it go “Click!” 😉 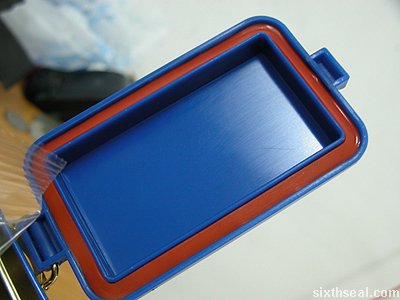 The other thing which stands out in the Newman’s Milk Chocolate TV
Mix casing is the felt lined blue and red recessed top, seemingly to
isolate the ambient moisture from affecting the chocolate produce. It
looks normal on the outside, but the red and blue interior lid
poly/foam adapter goes flush against the four sides of the metal
container and the latch circumference when the lip is in a closed
position. 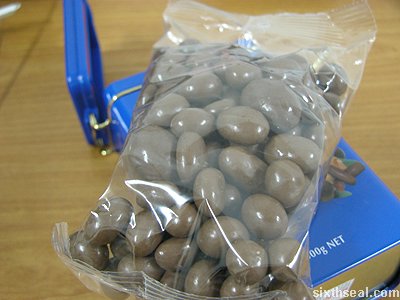 The Newman’s Milk Chocolate TV Mix opens up to reveal a wrapped
package of chocolate covered candy. Newman’s, in addition to making
precision custom containers, also makes chocolate, in case it slipped
anyone’s mind. Confectionary is their primary line of business.
Newman’s is an Australian brand, operating from Victoria; which
happened to be the same state I was staying in before I started
working, so I’m familiar with their product line. It tastes like
chocolate should…rich, creamy and (cloyingly) sweet. 😉 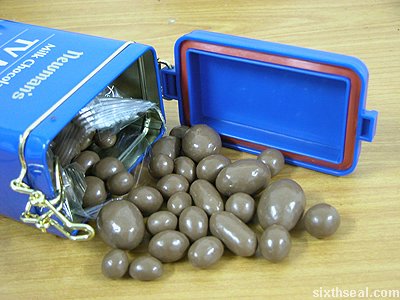 I love the variety that the Newman’s TV Mix offers too – there are
several types of nuts (hazelnuts, almonds, etc.) covered with chocolate
and a few (I counted three) surprise non-nut item to add variety. It’s
one of the things you either love or hate.