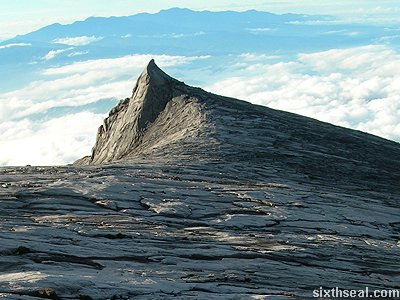 Mt. Kinabalu is the highest mountain in Borneo. The majestic mountain is also a feature of the Sahah flag and the highest peak is called Low’s Peak,
clocking in at an elevation of 4102 meters. The height of the summit
changes from time to time though, and it’s currently listed as 4095.2 meters.

The climb up began at 0230 hours from the rest house at 3,320 meters
above sea level. We had already scaled the first part of the mountain
earlier and the summit attempt was made after 4 hours of sleep. I was
the only one to reach the top amongst my buddies – one didn’t want to
go and the other gave up half way. 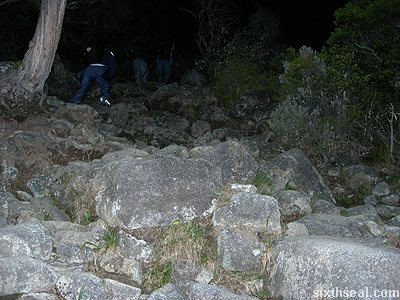 The mandatory guide that was assigned to us woke us up at 2 am in
the morning and I had a quick snack of Pringles and brought along a 1.5
liter bottle of water and several energy bars. The altitude at the
start of the summit climb made the ambient temperature very cold, with
an extremely icy wind chill factor.

I suited up in climbing gear and grabbed a torchlight before
following the guide up the summit at 2:30 am. It is important to wear
gloves as you will need the grip to scramble up the mountain using a
rope and as protection from the rugged granite terrain. The altitude
also makes scaling the mountain difficult and it is important to take
breaths to get used to the thinner atmosphere as you climb up the peak. 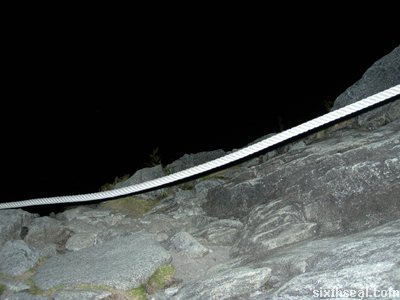 The first part of the summit attempt is through rocky terrain and
there are some dangerous areas where the path is narrow and there’s
only a rope separating you from a long fall down the cliff. This isn’t
visible when you climb it as its dark – but watch your step, as some of
the ground is slippery. 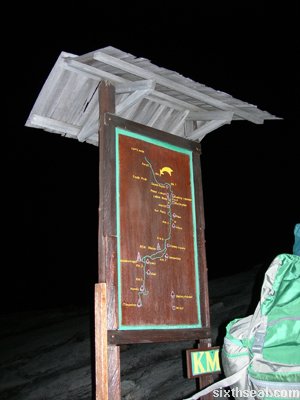 I made good pace and reached the 7 km point with relative ease, so I
told my guide to stay with my friend as he’s moving slower. There were
other groups climbing so I decided to embed myself with the faster
moving groups. It started to get difficult after 30 minutes of climbing
– the weather was extremely cold and my windbreaker couldn’t seem to
keep the cold out. The temperature drops below 0 degrees Celsius at
night and ice forms, though there’s no snow up there.

I started to get altitude sickness again after the first hour and
had to stop frequently to catch my breath. I practically sprawled at
the ground and as I got higher and higher, the more exhausted I got,
and I was close to giving up…except I wasn’t going to give up, so I
just soldiered on and at one point was practically clawing my way up
the jagged rocks by sheer willpower alone. 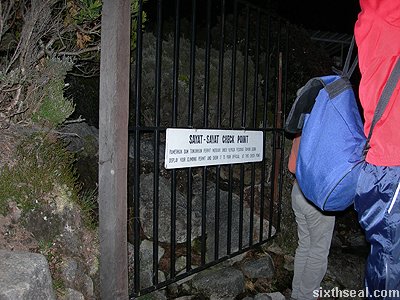 I finally reached the Sayat Sayat checkpoint (where
you register your summit attempt) and had to take a 10 minute break
there just trying to catch my breath. I don’t usually exercise and
that, compounded by the unfriendly climate and the previous day’s
exhaustion made my summit attempt very difficult. My heart was jack
hammering and I was breathing raggedly, but I was just as determined to
reach the top. 🙂 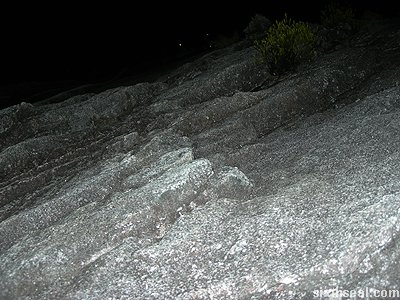 I could barely feel my fingers due to the cold, when I reached the 8
km point, despite the gloves. I met Connie, a Hash House Harrier from
Kuching who asked me if I was alright when she saw me trying to get
warm in a gully. The wind chill factor is a serious concern at this
altitude – I couldn’t ever shield my face from the wind. I decided to
climb steadily without stopping despite my exhaustion and timed my pace
to Connie’s, who’s more experienced. 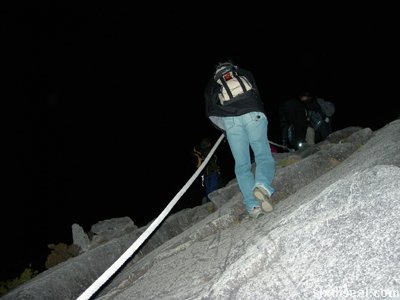 The next few hours passed with a blur and all I remember is the
sharp rock face and the sporadic flash of light from a torchlight as
the climbers scaled up the mountain. It got to a point where I was so
exhausted, my mind went blank and I just forced myself to keep my hands
and legs moving in the general direction of the summit.

It got better as dawn started to break and I could see the peaks of
Mount Kinabalu. That gave me a burst of adrenaline and I started to
climb with more vigor. I didn’t feel exhausted anymore at this point
(probably coz of the endorphins) and marveled at the beautiful face of
Mt. Kinabalu that is starting to reveal itself.

I soon reached the ridge at the bottom of Low’s Peak (the highest
peak in Mt. Kinabalu) and started scaling up the face of the peak.
There is a rope to guide you through the large limestone and granite
peak – it has a very steep inclination and the final 15 meters requires
unassisted climbing, so rock climbing skills would come in useful here. 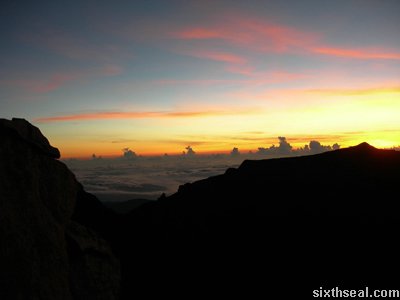 I managed to pull myself up the steep face of the peak and finally
got to the peak of Mt. Kinabalu just before sunrise. The dawn was
breaking over the mountain and it’s truly a sight to behold…I was
glad I made it to the top. 🙂

Here are some photos from the summit: 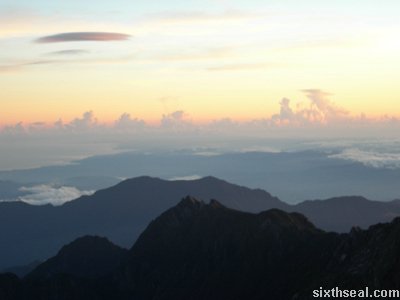 Dawn breaks on the summit of Mt. Kinabalu 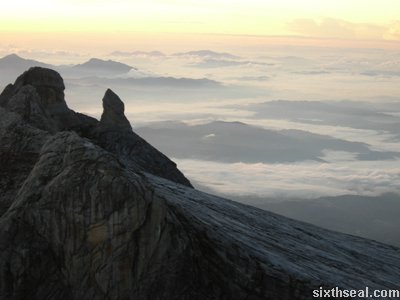 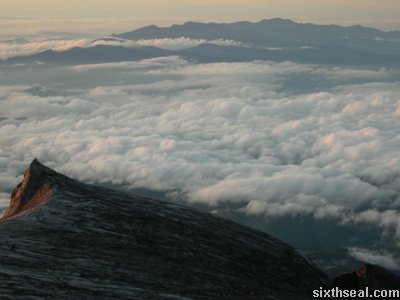 The clouds below the summit – on the top of the world! 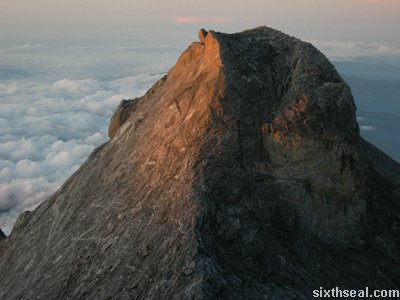 Victoria’s Peak taken from the summit at Low’s Peak 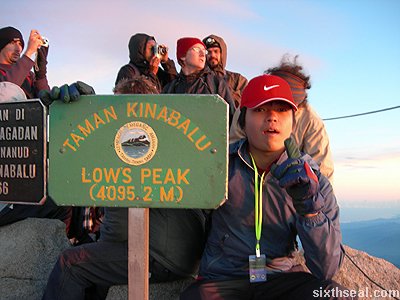 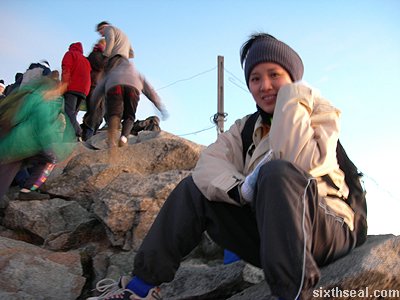 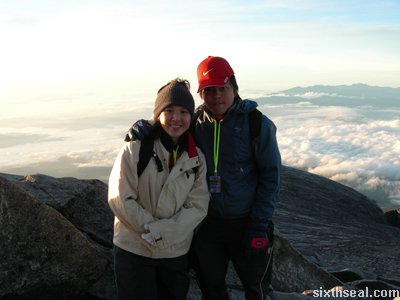 Connie and me, taken at the summit 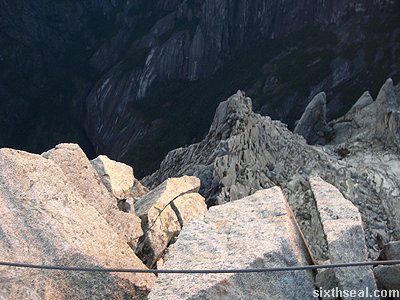 Low’s Peak – wire to prevent a fall down the peak 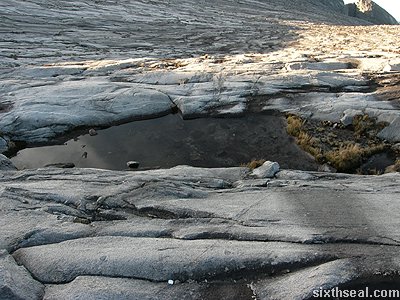 Films of ice forming at water pools at the summit 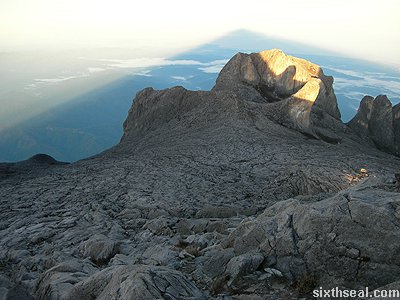 The beautiful peaks of Mt. Kinabalu as seen from the summit 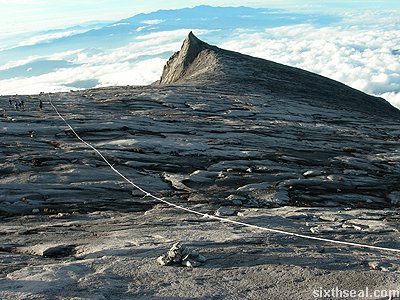 Descending Mt. Kinabalu – the mountain has been conquered! 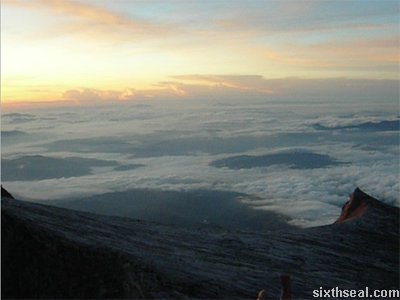 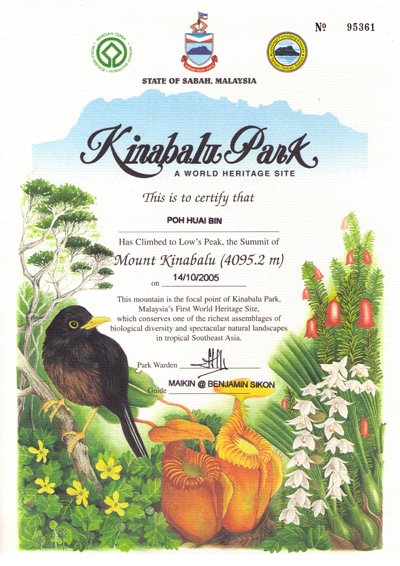 Mt. Kinabalu is an impressive granite and limestone mountain and is
a sight to behold in itself. The scenic view at the summit of the
highest mountain in Borneo is breathtaking! I highly recommend scaling
the mountain to anyone who’s visiting Kota Kinabalu, Sabah.