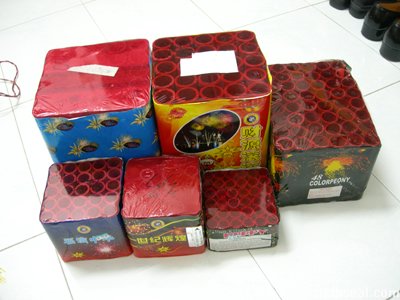 Chap Goh Meh marks the end of the Lunar New Year. Chinese New Year is celebrated for 15 days and Chap Goh Meh literally means (the) 15th night. Firecrackers and fireworks are usually let off liberally to mark the end of Chinese New Year. There is a wide variety of firecrackers and fireworks available in Malaysia and the large self-contained box type is the most popular ones. 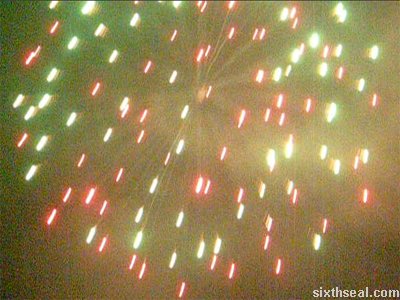 I’m a big fan of firecrackers and fireworks (and everything else that goes “boom”) and it seems that the trend in 2006 shifts markedly to industrial grade fireworks. The market in Sibu and Kuching is flooded with display shells – the catch-all term for the 3″, 5″ and 8″ shell that shoots up before exploding in fascinating pyrotechnics. 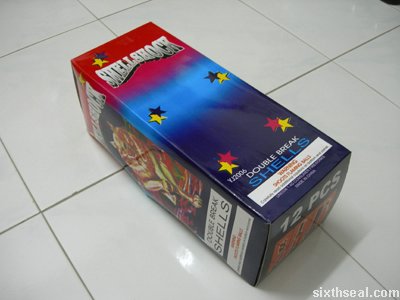 This is an example of a “consumer grade” display shell fireworks. Shellshock comes in a box containing 12 pieces of “double break shells”. It’s made in China, that’s where firecrackers and fireworks in Malaysia is sourced (read: smuggled) from. 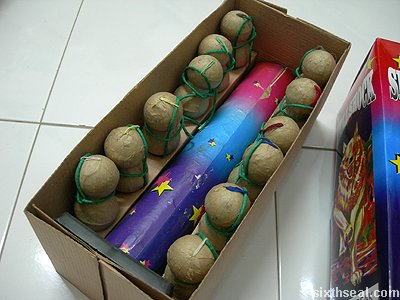 The Shellshock box opens up to reveal a foot long tube launcher embedded into the package with 6 shells lining each side of the box. The shells are inserted one at a time into the launch tube with the flat end (base) making contact with the bottom of the launcher tube. 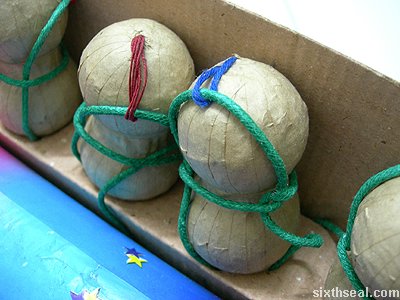 The 1.5″ shells is shaped like a gourd and there is a long conventional green fuse bound intricately around the shell and held in place by a colored string on the top indicating the color of the display shell when it is…well, displayed. 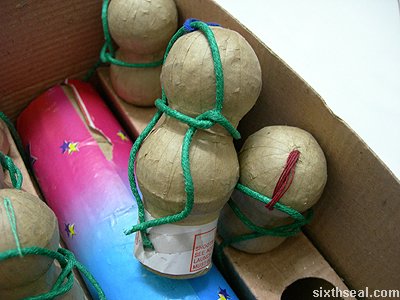 Here is a closer look at this consumer grade firework. There are double spheres in the shells – this is a double report, double flare display shell. The shells have a flat base and a visible fuse starter. This firecracker requires the launcher tube to launch the shells into the air and the long fuse is to accommodate for the launcher length. 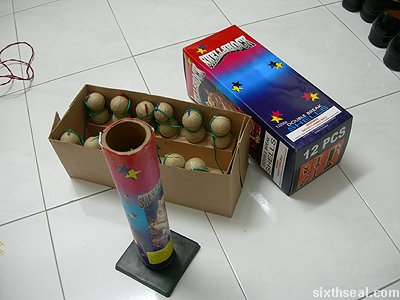 The Shellshock ones come in a disposable cardboard and plastic launcher. 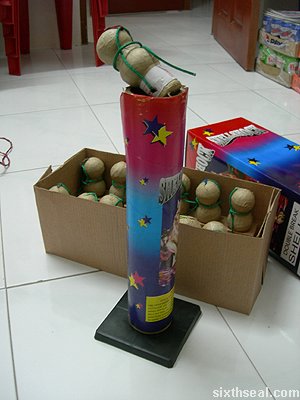 The display shell type fireworks (regardless of grade) should always be used in conjunction with a launcher tube to guide the shell upwards. I’m sure everyone has tried not using a launcher tube at least once in their lives (at least I did, with a 3″ shell) and the results are not pretty. 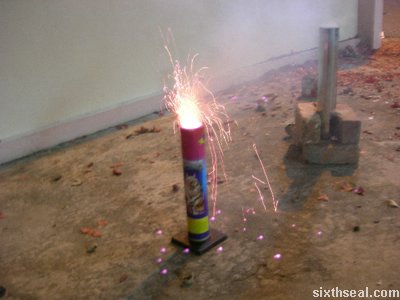 The Shellshock launcher tube does the job well enough…

It’s pretty dangerous since the shell just explodes on the ground, sending out burning debris over a wide area. Notice how large the dispersal area is when it’s airborne? That’s the coverage you can expect when it goes off on the ground. Most residential areas cannot accommodate for this kind explosive power. 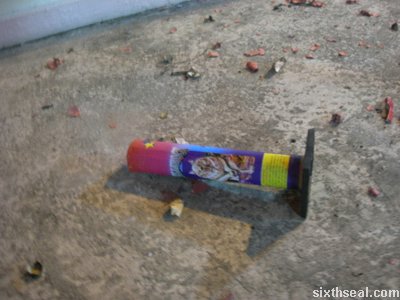 …though it topples after each launch…and the cardboard burns.

The one time I did it resulted in a cracked glass door (with an industrial grade shell), flaming explosions all over the front of the house and shocked family and neighbors. Oh, and I set the lawn of the neighbor on fire too. In my defense, it was dry grass. :p I never did dare to repeat that stunt again, since I didn’t want to pay for damages to vehicles, property and possibly human life. 😉 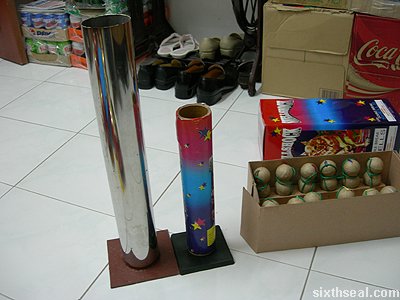 Meet big brother. 😉 This is a custom made launcher tube for 3″ industrial grade display shells. 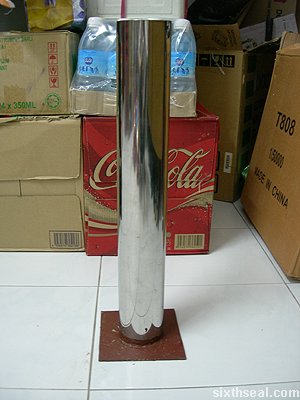 The display shells (3 inch, 5 inch, and the expensive 8 inch ones) are sold in boxes with instructions on the dimensions of the launcher and the instructions are passed on to a local blacksmith (metal smith) to be custom made. 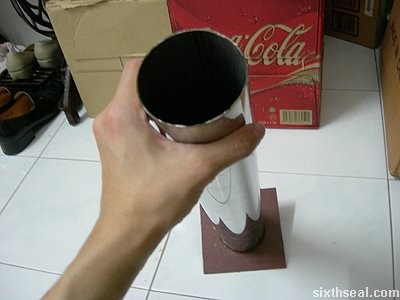 It’s usually made of solid metal alloy so it can be reused without the force of the initial primer explosion from the shells (which is quite substantial) wearing out the launcher tube. The base of the launcher tube is very important – perhaps the most crucial part of the component – it must be heavy enough to hold the structure or wide enough to allow other weighing material (bricks etc.) to weigh it down. 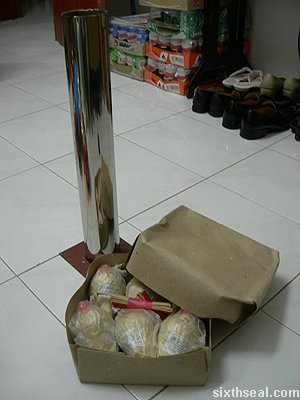 This is the launcher tube displayed with 3″ display shells. These things are ordered in bulk and come with a sticker specifying the exact pyrotechnics to expect from the particular shell (see below). 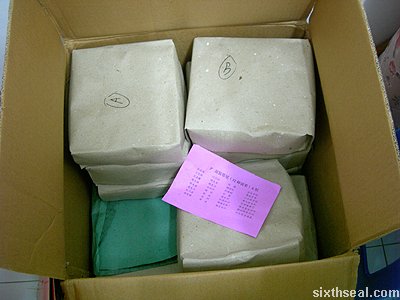 It’s sold in boxes made of heavy paper stapled together to form a “box” of sorts and each box contains a mixed bag of pyrotechnics goodness, with different “grades” of shells e.g. Grade A would be a shell which goes “Purple with sparkling to red ball” (three stages with large initial purple explosion bloom, followed by sparkling edges and a single slowly descending red ball) while Grade B would be a shell that goes “Green to silver” (one explosion, color change at fringe of explosion). 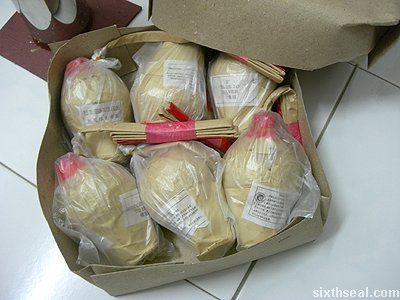 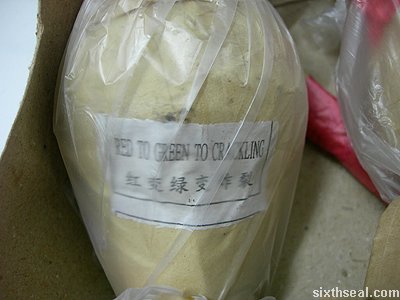 The grenade like display shells are individually wrapped and come with a label in two languages of what to expect from that particular display shell. This Grade A shell goes “Red to Green to Crackling”. 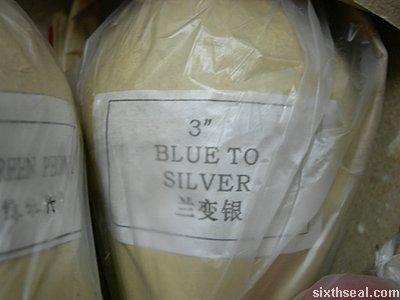 This Grade B shell goes “Blue to silver” (two phase change) while a Grade C shell would be a single phase explosion e.g. “Red & Blue wave”. 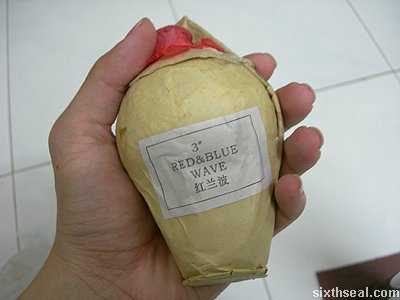 I have relatively large palms and this is a size comparison of what a 3″ display shell looks like. It’s remarkably similar to a grenade, except you have to use a launcher tube instead of igniting it on the ground (which would cause a lot of Bad Things (TM) to happen). 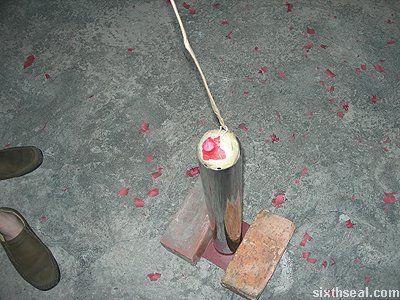 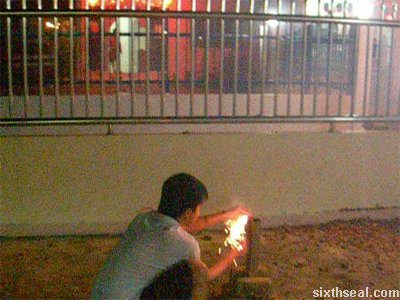 I probably should mention that the industrial grade fireworks do not have a long fuse delay, despite its looks. The fuse lights slowly at the top and then *zaps* goes straight down the remaining length of the “fuse” and its pyrotechnica!

The blast is pretty substantial and it’s fun to be close to the launcher when it goes off. It’s a mini shellshock effect, right at your doorstep. 😉

Consumer grade fireworks, these are not. 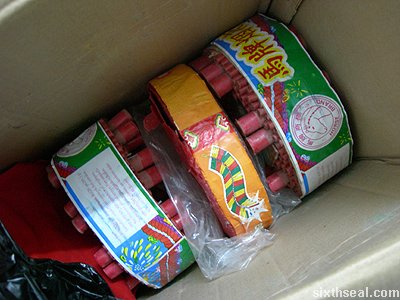 Lest we forget our roots, these are the traditional Chinese firecrackers. 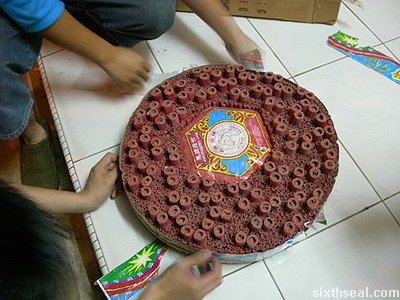 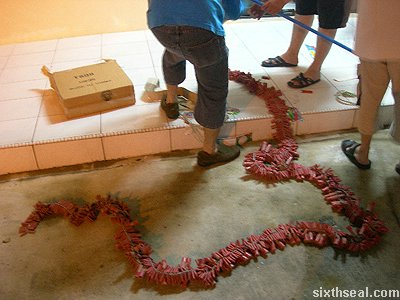 It’s fast and furious, burning through 50k of individual sticks of firecrackers in the span of a few seconds. 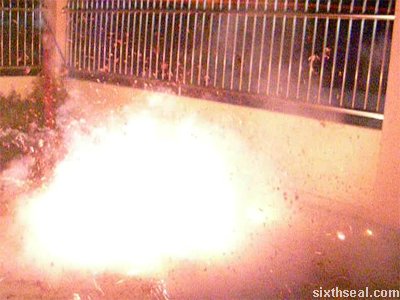 It got all over me in the video, though I thoroughly enjoyed it. Classic!