How not to light a firecracker 101 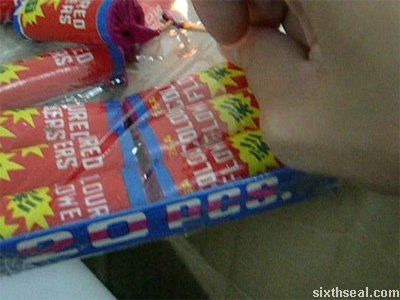 I was alone at home last night and decided to add some Chap Goh Meh cheer to the place. I had a couple of Chai Lei firecrackers [sixthseal.com] around (it’s a loud firecracker) and I have let them off in the enclosed space that I call home before without adverse consequences. However, this time I had to man the camera AND light the firecracker at the same time, and unfortunately God, in His infinite wisdom only gave Man two hands. 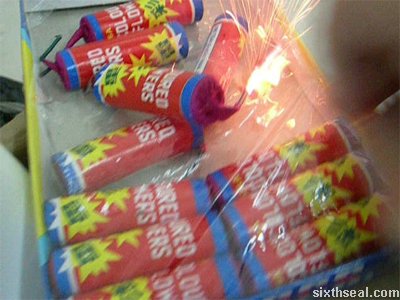 I lost my lighter and had to use a match to light the firecracker and me in my infinite wisdom, decided it was a good idea to light it straight from the box which contains the rest of the Chai Lei firecrackers. I lit the firecracker, prepared to aim the digicam at it, and then I noticed that the shrink wrap on the firecracker box was burning (!!!).

I tried to blow out the flames (again, me and my infinite wisdom) and it just accelerated the burn rate AND the lit firecracker was still in my hand. I had a brain fart and threw the firecracker away before overturning the burning box into a towel and hoped for the best. 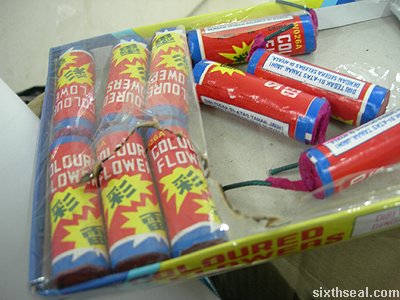 My hands were shaking from the nearly adverted catastrophe. It would not have been pretty for the box of Chai Lei firecrackers to go off all at once indoors.

It would be decidedly a Bad Thing (TM). 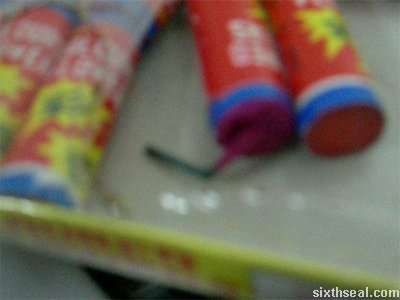 I did another take and bad luck seems to come in twos (or is that threes) coz I dropped the (still lit) match into the box, before it bounced out, making it come into contact with an unlit fuse and singeing it. I did not realize it and only noticed it after the fact. The tip of the Chai Lei firecracker fuse nearly caught on fire and would have set off a chain reaction which would probably burn the place down (since I didn’t even know it happened).

The worst thing is, my fire extinguisher hasn’t even been inspected since I moved in and I live on the top floor and the any fire-related incidents would probably leave…er, collateral damage.

Yeah, I know, I’m the epitome of a responsible citizen. 😉 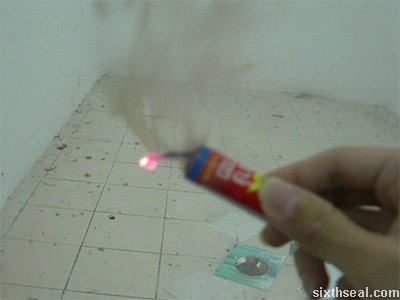 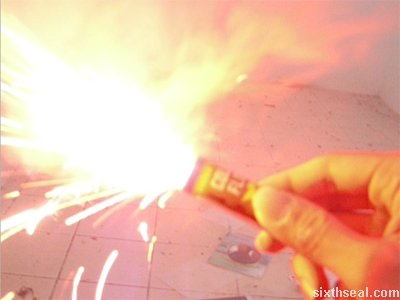 This is a perfect take. It’s fun to light Chai Lei firecrackers indoors for a change. It’s also fun to throw several into an electric kettle indoors and see if the metal/plastic would hold the blast or send sharp shards all over the enclosed space.