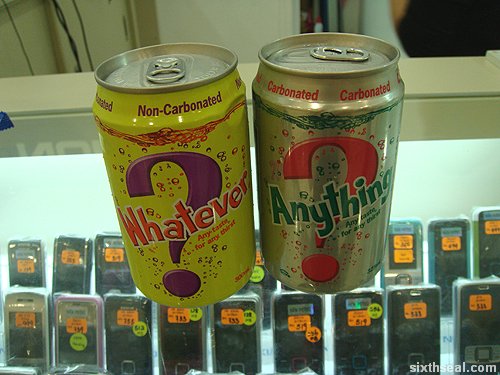 Anything and Whatever is one of the most novel concepts in the beverage industry I’ve seen to date. I’ve been hankering to get my hands on the drinks from Singapore, which was recently launched in Malaysia as well, and finally got the stuff today. 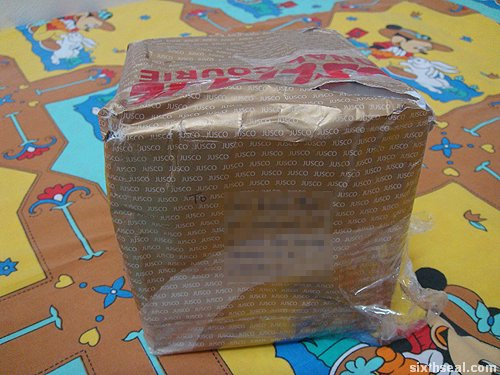 I’m supposed to say that it was sent to me from Singapore by the person who sent it. It’s not available over here in the remote jungles of Sarawak yet so my friend sent it in a package to me. She wanted me to be the first in Sibu to try it and surprised me with the package. 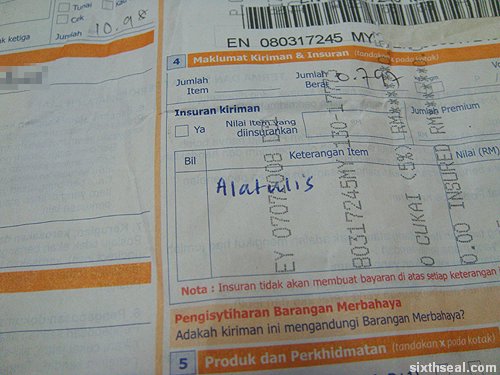 Unfortunately, she declared it as “alatulis” (stationary) so it got caught up in Customs. I’m sure they were wondering what kind of stationary weighs 0.797 kg and makes a clanking sound when you shake the package with a liquid sloshing echo. 😉 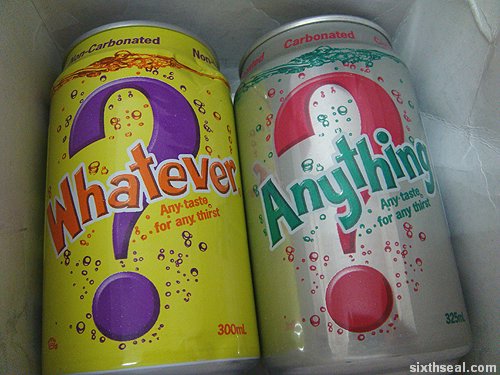 Naturally, astute readers would comment on the fact that Singapore doesn’t have PosLaju (which a next-day courier service run by the Malaysian government). This begs the question on where it was actually sent from and by whom – both good questions…to which I have no good answer. 😉 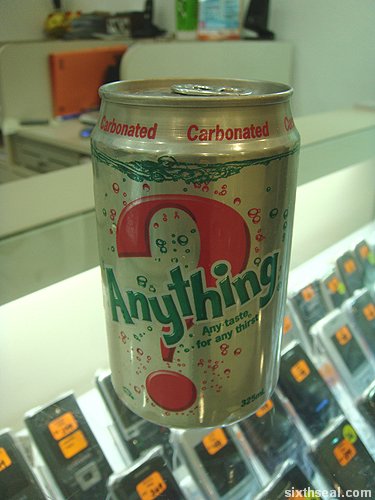 Anything is a carbonated drink which can contain anything from Cola, Cola with Lemon, Apple, Fizz Up, Cloudy Lemon, to Root Beer. You don’t know what you’re getting until you open up the can. Fascinating concept, eh?

Whatever is the non-carbonated cousin to Anything and contains a surprise flavor that ranges from Ice Lemon Peach, Peach Tea, Jasmine White Tea, Apple Tea, and Chrysanthemum Tea. The can is not labeled (except with a huge question mark) and you don’t know what you’re getting until you open it. Fun! 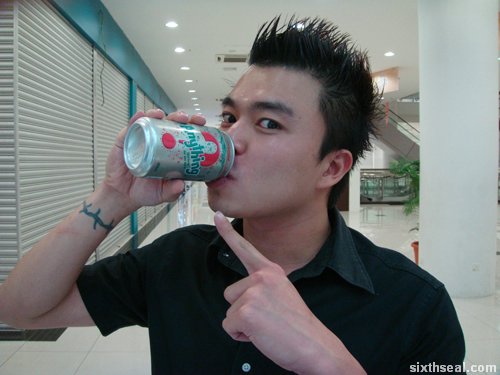 I got the Fizz Up for the Anything can. It tastes like 7Up and is a fair emulation of the latter. It tastes alright, but the fun with Anything is that it could be…well, anything!

Whatever dealt me with the Peach Tea. This tastes like the Lipton Peach Tea. Nice! I just adore the concept of not knowing what you’re gonna get until you open up the can.

It’s just perfect for people like me who loves surprises. Thanks D! 🙂

25 thoughts on “Anything. Whatever.”