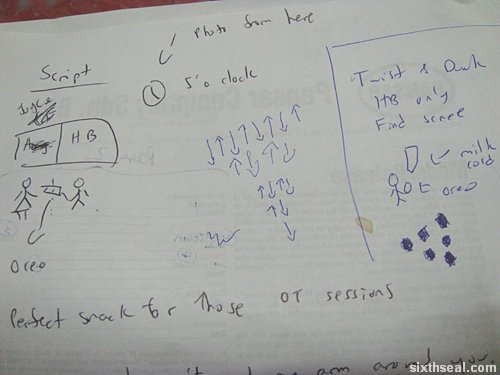 The Oreo Twist Lick Dunk advertorial was one of the ones I really enjoyed doing. I enlisted the help of a couple of my friends and coworkers to participate in the script that I had written. It was more of a doodle of sorts with stick figures of scenes I had envisioned and a rough idea of the text. 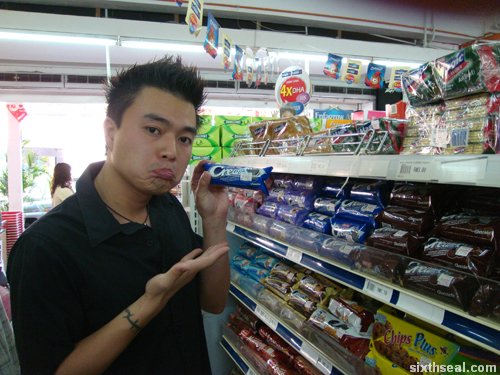 The first problem came even before the photo shoot – there were no Oreo cookies to be found in the entire Sibu town. I searched every single supermarket and shopping mall and it seemed like there was a town-wide shortage of Oreo! 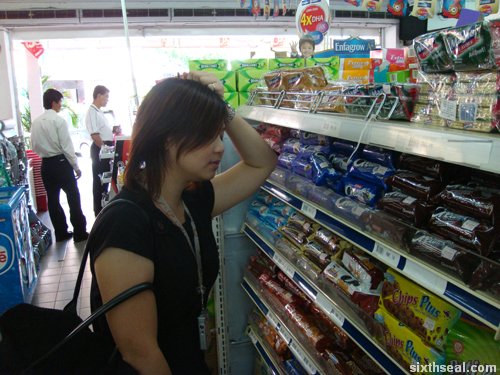 I finally managed to find out the reason behind it – the manufacturer had recalled all the existing Oreo cookies and issued a memo to the retailers with instructions to take it off the shelves pending the arrival of the new packaging. The ship was supposed to have arrived but it got delayed at some port and no one had any idea of when it’ll actually come. 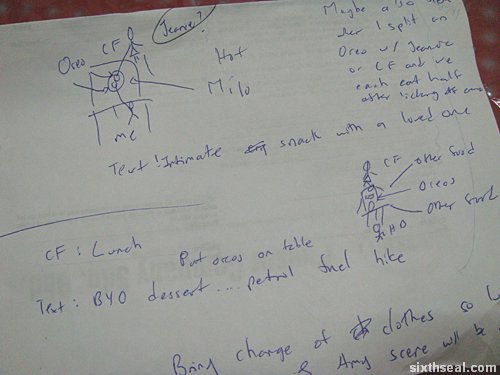 I thought about changing the script to a “Pepsi Test” writeup with people being blindfolded and asked to determine which cookie tastes better – Oreo or a local emulated version e.g. Cream-O but that would require Oreo biscuits as well. I was a bit concerned about the uncertainty surrounding the arrival of the shipment of Oreo to the Sibu market so I decided to take matters into my own hands. 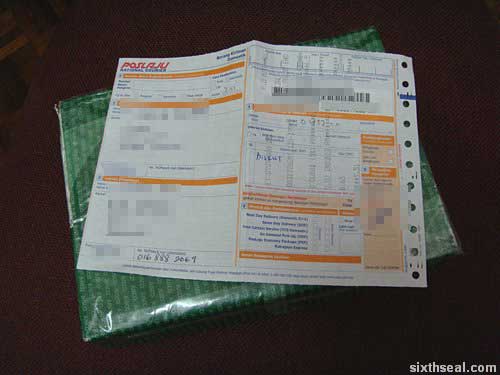 Thus, I called D, who was in KL at that time and staying at the Cititel hotel in Midvalley Megamall. She was kind enough to go to Jusco and get two packs of Oreo cookies and send it back via next-day courier service. D had to go in search of a box (so the Oreo wouldn’t get crushed) and hunt for a post office at the mall, so it’s thanks to her that I managed to meet the deadline. 🙂 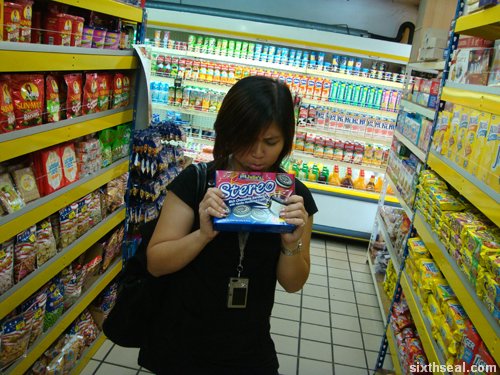 In the meantime, I enlisted the help of Mary in my alternate scripts. I remember one of the alternate scripts was about not being able to find Oreo and wanted to title that post as “sixthseal.com and The Quest for the Holy Oreo“. The script went along the lines of being unable to get my hands on genuine Oreo cookies in Sibu and having to resort to having it sent from KL. 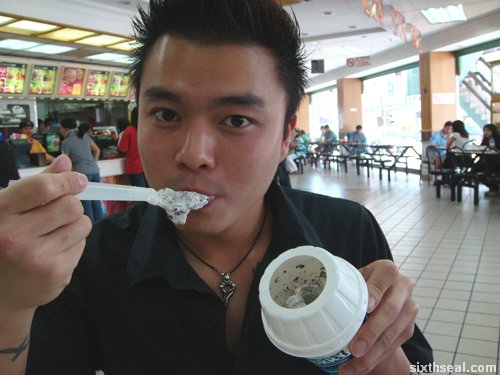 I even went to McDonald’s just to get a shot of their Oreo McFlurry, which was just about the only Oreo containing product in Sibu at that time. 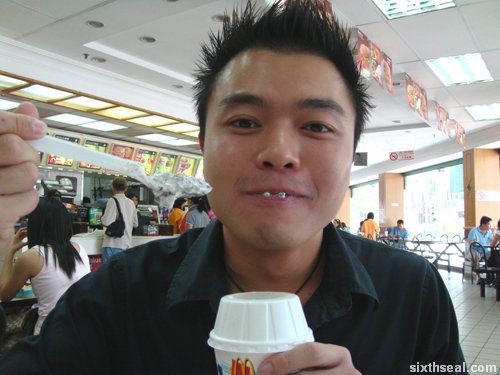 This was the backup plan in case the package of Oreo didn’t arrive for reasons attributed to our fine postal service. 😉 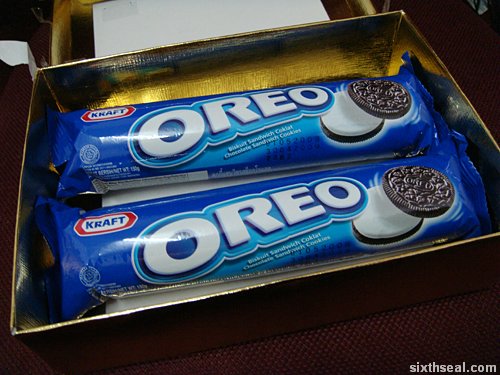 Lady Luck was on my side though and the package containing Oreo from D arrived the very next day! Thus, I re-shot several of the scenes with the real Oreo. It took me two days to complete the Oreo shoot. One particular scene that stood out was the shoplifting scene. 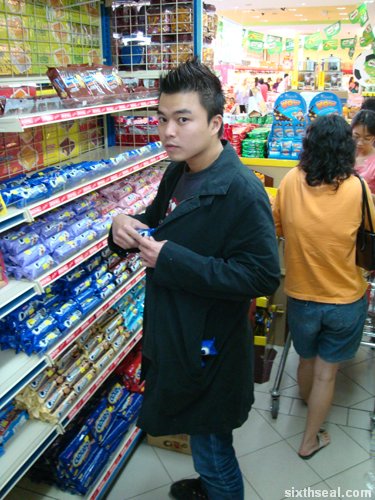 I did the first one with Cream-O, a local biscuit “inspired” by Oreo, and I had serious reservations about submitting that since the client would obviously not want to see a competitor’s product in the photos. Cream-O looks almost like Oreo due to the blue packaging but I didn’t want to tarnish the advertorial by passing off another product as Oreo. 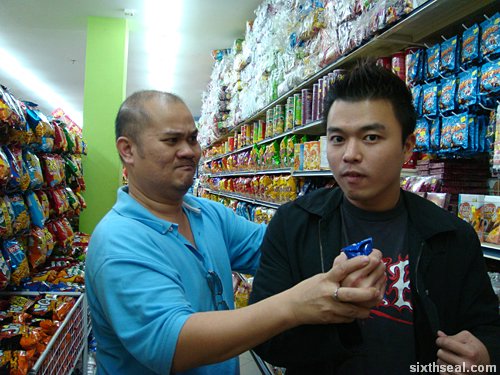 Well, the reason this particular scene was memorable was due to one of my friend’s interaction with the clerk at a local supermarket. He has a really funny and sarcastic response during the Sibu Oreo Shortage (TM). We were at Ta Kiong and they haven’t received their shipment of Oreo as well, but one of the clerks said that there had Oreo biscuits and walked with us down the aisle and pointed to…Julie Stereo.

This prompted my wise-cracking friend to launch into a funny tirade against the poor girl.

Friend: Stereo? We said OREO not STEREO.
Clerk: Ya lah, Oreo. (points to Julie Stereo)
Friend: That’s not Oreo! How can you compare Oreo to Stereo? Do you compare a Mercedes to a Kancil? We wanted the original Nabisco Kraft Oreo.
Clerk: (speechless)

Anyway, we didn’t even know if the clerk understood English which was a bit of a mistake on our part. I walked in on Tuesday again to get some chocolates and the very same clerk called out to me and told me that my Oreo has arrived. She then proceeded to talk to a fellow clerk across the counter about getting “suan” (Hokkien for sarcastically teased) by my friend the other day. 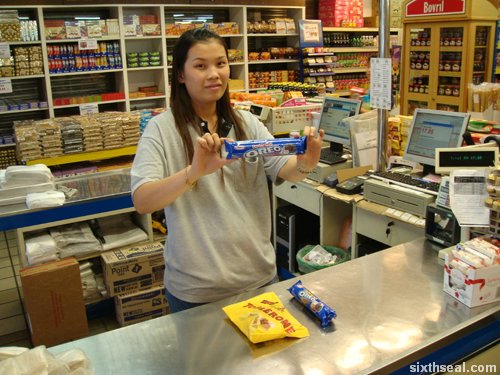 In hindsight, it was really kinda funny. I apologized to her and told her we were only having a bit of fun, albeit at her expense. She was very nice about the entire thing though, so kudos to her for that. I got a DoubleStuf Oreo and the Peanut Butter and Chocolate Oreo to supplement my meager supply of Oreo from KL. I even got her to pose for a photo and we returned the next day to do a proper shot of the shoplifting scene with their ample supply of Oreo as the backdrop. 🙂 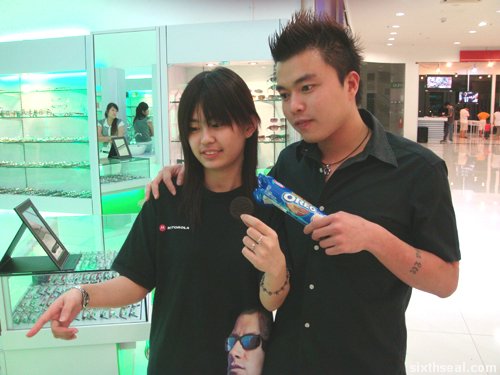 Reason: Product placement overkill. The pose with the Oreo is too fake. 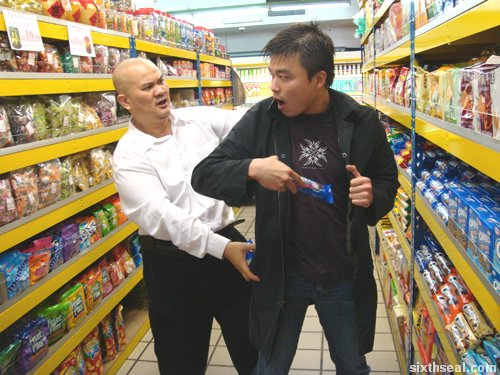 Reason: The expression on my face wasn’t right. I didn’t look shocked enough – in fact, I look a little bit too aggressive. 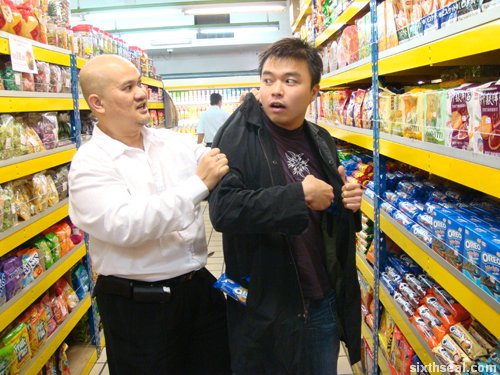 Reason: Same as above. I look more irritated than shocked at being apprehended by a security guard for shoplifting. I needed the comical horror expression at being caught in the act. 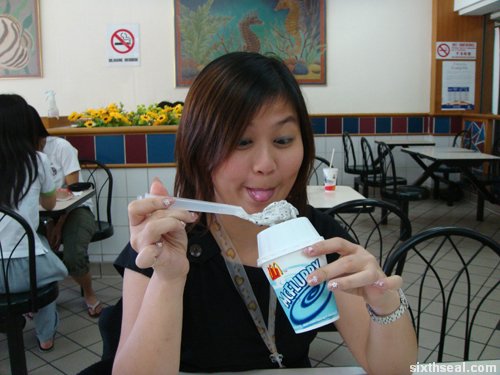 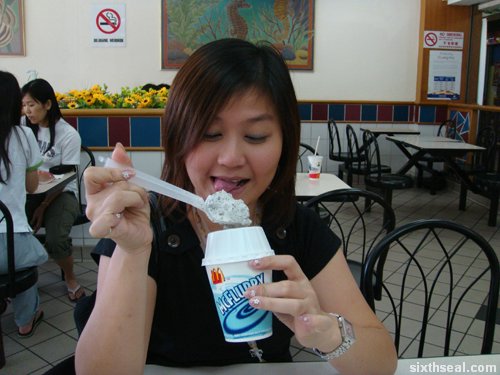 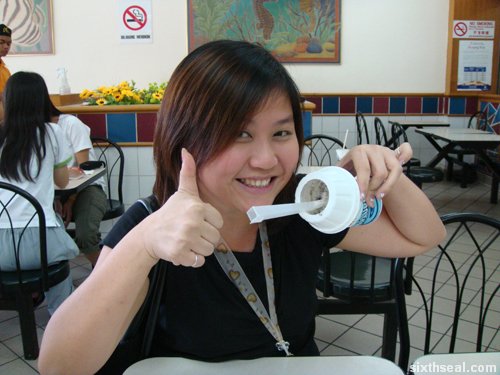 I was delighted to find out that Mary was such a good model to work with. She has a wide repertoire of facial expressions. She can do sad, frustrated, angry, cute and happy when called to. She’s really a pleasure to work with and has been a great help to this project. Thanks Mary! 🙂

The funniest thing about this advertorial is that most of the shots were done using a single Oreo pack. I had to conserve my resources and had planned out which scenes needed the pack to be open and which ones didn’t. I was so stingy with the two packs of Oreo that consumption was strictly controlled even during the scenes except when absolutely necessary. Heh!

23 thoughts on “The Making of the Oreo Advertorial”