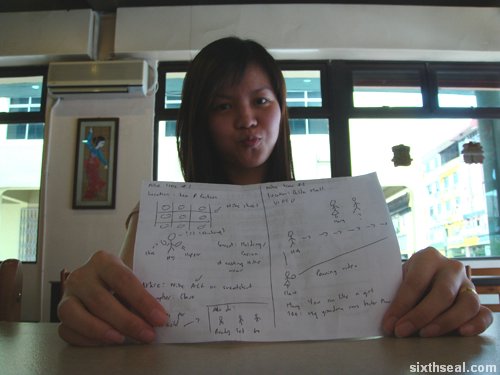 I received the Nike advertorial pretty late in the game (pun intended) and scripted out two major scenes that I wanted to be in the writeup. The first was to be shot at an athletic wear/sports gear shop/active lifestyle outlet (I don’t even know what these places are called nowadays anymore ;)) to do the visualization (Read: camwhoring) aspects of the design contest. 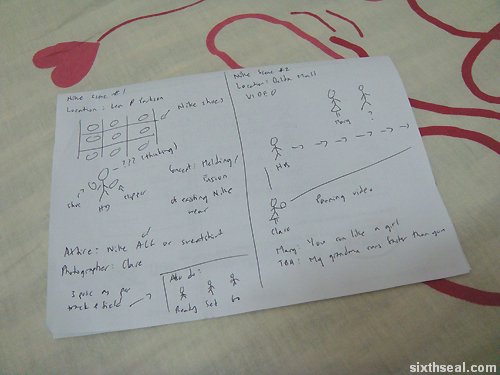 Due to the limited number of such outlets in Sibu carrying Nike products, I decided to go to Lea Sports Center at Wisma Sanyan since I distinctively remember them having a Nike showcase while I was…er, getting adidas trainers earlier this year. 😉 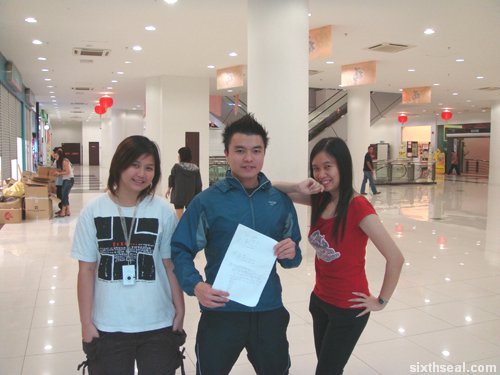 Thus, I geared up in my Nike ACG (All Climate Gear) windbreaker that I got in KK back in 2004 before climbing up Mt. Kinabalu (the highest mountain in South East Asia) for a bit of product placement pimpage and went out with Clare to do the photo shoot after work. 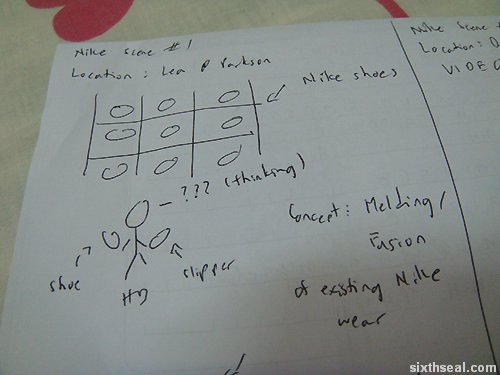 It should be noted that my tracksuit trousers were actually adidas and so were my trainers. It doesn’t look very obvious though so I thought it would pass The All Seeing Eye of Nike. 😉 I do have Nike apparel in my current wardrobe – I remember getting a limited edition Nike tennis shoe during the Melbourne Open 2003 and have several other pairs of Nike trainers. 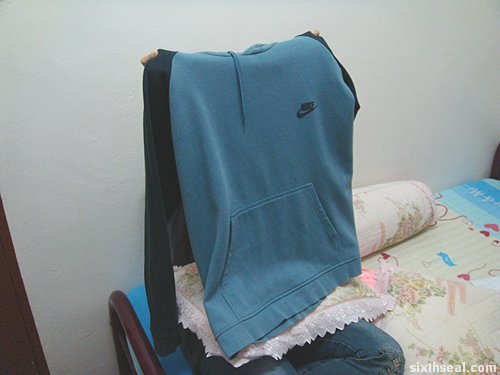 There’s also a Nike sweatshirt with a hoodie that I got for chilly spring weather in Melbourne which has found a new role as a tattoo concealer for Casual Saturdays in the office. The dress code in my office does not allow for visible tattoos so I wear long sleeves every single workday – even on Saturdays. Yes, we do work half day on Saturday over here in Sarawak. 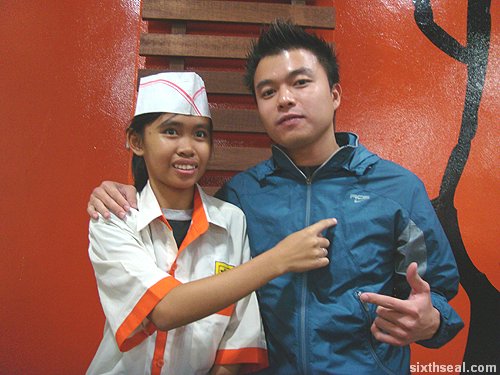 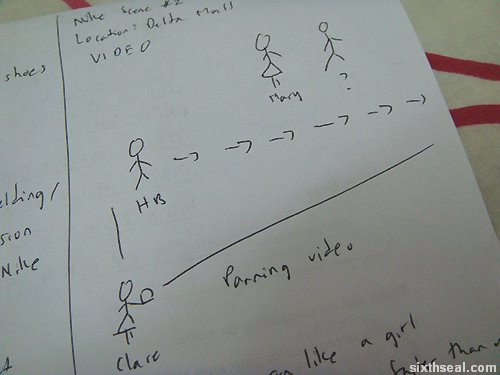 I proceeded to Delta Mall to meet up with Mary who was going to do the second major scene for the advertorial. I got a a lot of stares from people due to my athletic gear – I looked like I just finished a particularly grueling training session, but I kinda liked the attention. Heh! You’ve got to be able to take the double takes and stares if you’re a blogger going all out. 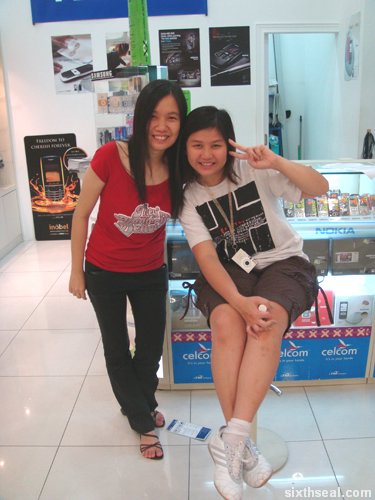 Anyway, the second bit called for a video shoot in which I was getting heckled by two people while running laps around the mall. I initially planned for Mary to be doing the heckling but she introduced me to this guy who was PERFECT for the role. This is the take with only Mary doing the heckling:

I preferred the one with both of them doing the heckling so that’s the one I submitted for the advertorial. Mary is great as usual with her excellent repertoire of expressions and I loved the guy coz he pulled off the correct intonation and derisive-yet-humorous gesture in a single take. The video calls for me to be doing slow laps (basically a simulated slow run) while two people calls out:
“You run like a girl” and
“My grandmother runs faster than you” 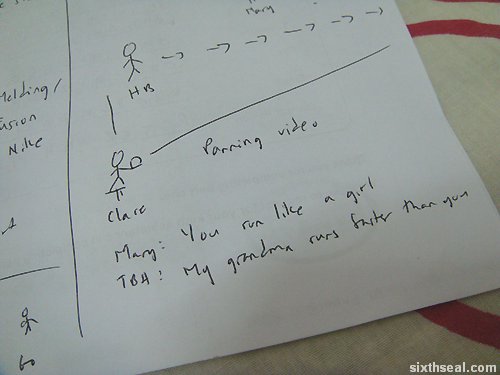 The duo had great localization which was not in the script with Mary going “You run like a girl lah” and the guy going “Hey, my grandmother runs faster than you, okay?” which I really liked.

However, the best scene in the advertorial is, IMHO, one that I did not anticipate or script out. I was having my nicotine fix after finishing the photo shoot when I saw a security guard outside the mall doing the same. I remember the shoplifting scene for the Oreo advertorial and decided it would be fun to include the same theme into this one. 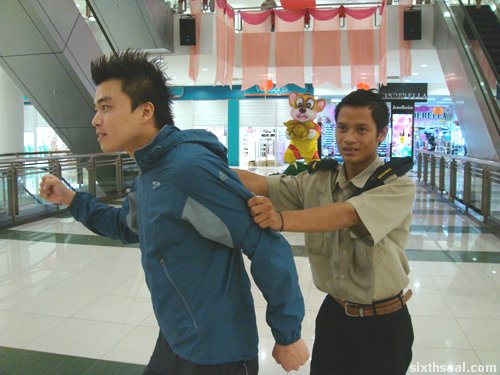 I got the security guard to grab me while I was attempting to run and he was kind enough to comply. This was the best ending for the writeup since I figured I could put in a quirky caption before the contest regulations. It ended up being “…and design a lightweight pair of trainers so I can outrun mall security next time“. 🙂 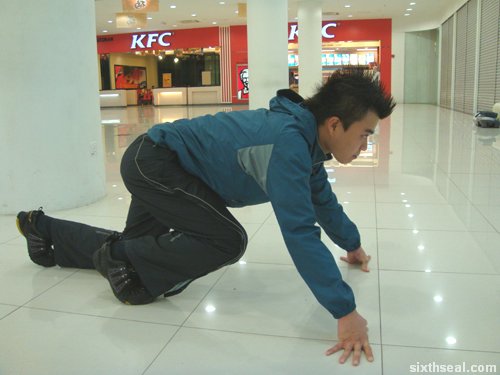 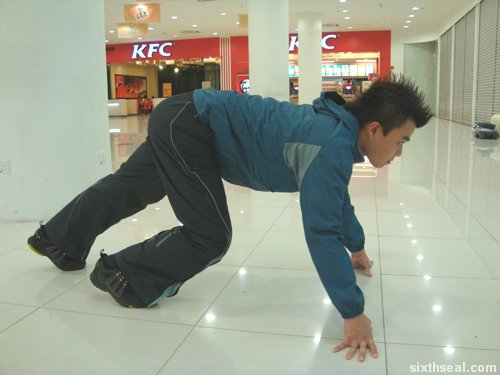 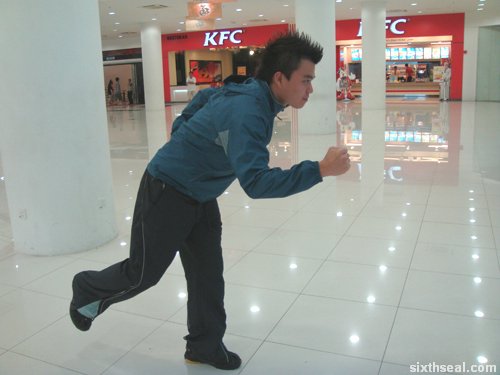 I had also planned a Ready, Set, Go series of photos (this is the original trio) with me doing all three poses but decided to include just one (the Ready pose) due to fears of an unintentional overdose of camwhorage. 😉

The exclusion was a really good decision in hindsight coz it seems so cheesy now. Heh! 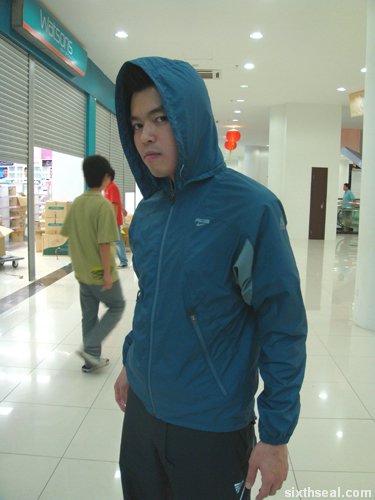 The girls convinced me to do a Jay Chou pose. I’m not even sure why I did that, since I don’t even listen to his music!

This was one of the fastest advertorials that I’ve ever done with all the shoots completed in a day from script to editing. It was fun to go with the flow and see what scenes came out that wasn’t planned out. Cheers to Mary and Clare for helping out on this one!

130 thoughts on “The Making of the Nike Advertorial”