Teow Chew Meng is a Teo Chew eating establishment located at Sunway Mas. I would not be surprised if the proprietor’s name is Meng and people call him Teow Chew Meng, but that’s not the case. The owner goes by the name Steven and there are photos of him adorning the entrance of the place with various local and regional celebrities like Jack Neo (the Singapore director). 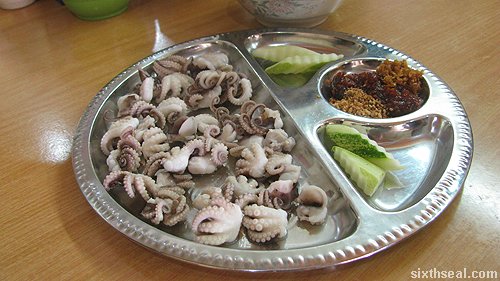 The boiled octopus (RM 12) came highly recommended so we ordered that for the appetizer. It’s just boiled baby octopus but involves no small amount of effort and skills to make it come out slightly crunchy (!). It pairs well with the spicy peanut sauce served alongside it. It’s nothing to write home about though – perhaps a lot of that has to do with being overshadowed by the superb Shark’s Fin Mee Sua Tow. 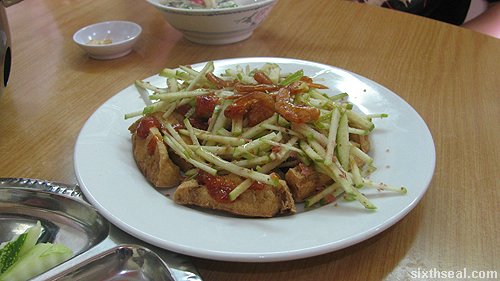 We also ordered the Apple Beancurd (RM 10) which is an unusual combination of deep fried tofu with sauce and prawns. There are finely shredded green apples topping this dish and the texture and taste contrast between the tofu, chilli sauce, green apples and prawns gives a tantalizingly palate-confusing yet delicious experience. 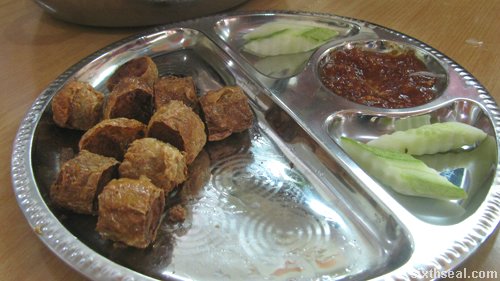 The other side dish we ordered is the Seafood Roll (RM 10) which is stuffed with prawns, fish, vegetables and salted egg. It’s another one of the house specialties, the salted egg yolk is supposed to add another dimension to this classic (and usually meat stuffed) dish. Teow Chew Meng is a big fan of substituting meat with seafood. The salted egg is like a surprise in the seafood roll – there’s a burst of flavor on your palate when you bite into it, which increases your appetite exponentially. 🙂 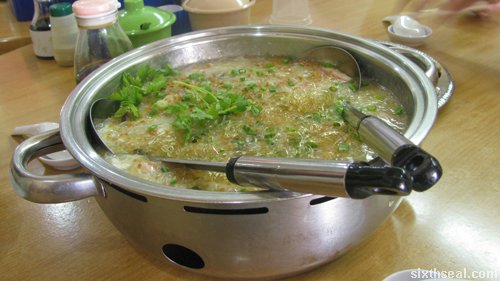 The flagship dish of Teow Chew Meng is their excellent Shark Fin’s Mee Sua Tow. It’s similar to their popular Mee Sua Tow (all aquatic creatures are intact) except this version includes an added premium ingredient – Shark’s Fin. The strands of shark’s fin are sprinkled liberally on top of the dish. It costs about RM 11 per person, which is actually quite cheap considering a bowl for four (4) allows everyone second helpings with leftovers to boot. 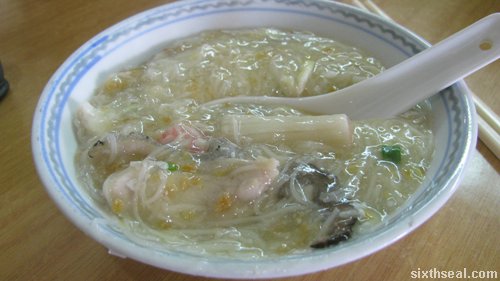 Teow Chew Meng does not skimp on the seafood either – marine biologists would have a field day identifying the large chunks of fish, clams, squid, prawns, oysters, crab sticks, fish maw, and cuttlefish inside. I love the mee sua over here. It has the consistency of porridge (not congee, porridge) but the starch and abundance of seafood and gravy makes it go down really well. It’s slippery in a good way. 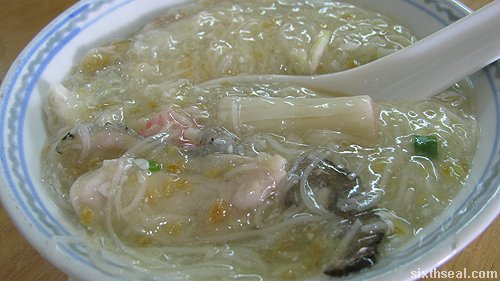 The Shark’s Fin Mee Sua Tow tastes great with seafood. This is the distinguishing feature of Teow Chew Meng – they use various creatures of the deep which unleashes (not infuse, it literally lets loose) a plethora of delicious seafood flavors into the mee sua. Nom nom nom. I ate three helpings.

View sixthseal.com in a larger map

Teow Chew Meng is located at Aman Suria and it’s surprisingly free from the usual office lunch crowd. I think we were the only ones there. Parking can be a problem during lunch, so car pool if you plan to go. The bill came up to about RM 160 for 9 people. I highly recommend going in a group and getting the Shark’s Fin Mee Sua Tow.

You’ll thank me for it, it’s awesome! Just thinking back makes me drool…