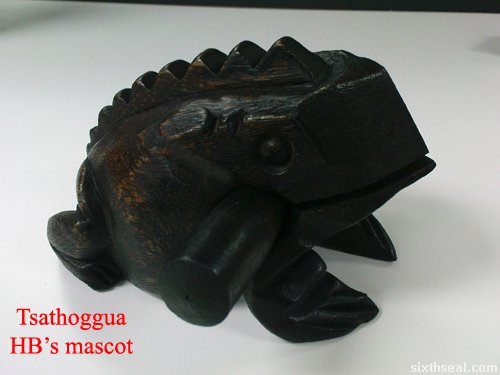 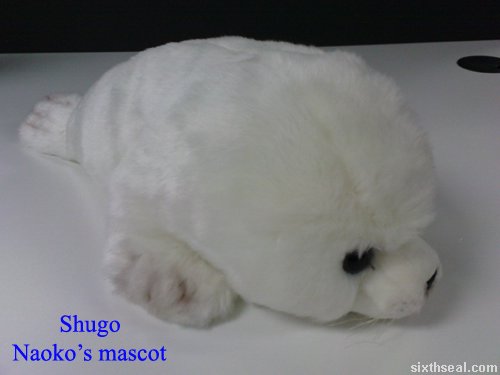 The Battle of the Titans

Once upon a time, Shugo, a seal from his genetic makeup, emerges from the sea to dwell in the Land of Man. His fur was as white as snow, and everyone loved his soft and pliable body.

Little did Shugo know, his days of peace and quiet among the humans were numbered. The Elder God Tsathoggua awakened from his millennia-long slumber deep beneath the seas. That is not dead which can eternal lie, and with strange aeons, even death may die. 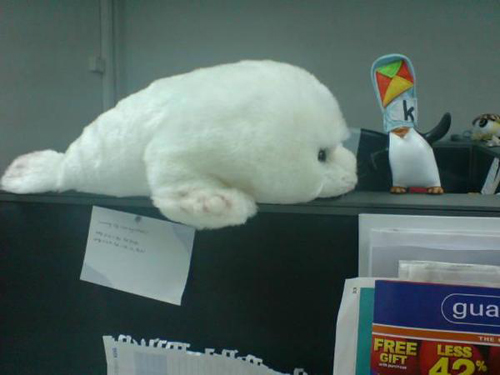 Tsathoggua is an Old One, fallen from his position among the Elder Gods for black magic transgressions. The Sleeper of N’kai has since dwelled beneath the darkest seas, bidding for time when he can arise again.

Tsathoggua, an amorphous, toad-like god-creature mentioned in the Pnakotic Manuscripts and the Necronomicon of HP Lovecraft is a fearsome creature which I bought in Melaka and placed on my desk at work to guard my workspace.

I’m not really sure that purchasing Tsathoggua was entirely of my own volition. It could very well be the Toad-God himself sending emanations from deep beneath the ocean in an effort to manifest himself in the fabric of the world we are living in…just to kill Shugo.

I’m sure there’s a history behind these two aquatic creatures. Some beef (pardon the pun) from aeons past which I unwittingly became part of, along with Naoko (who owns Shugo the seal).

Naoko choreographed Shugo and I orchestrated the attacks of Tsathoggua. It was totally unrehearsed, a very impromptu thing. The covert attacks were done early morning or during lunch so both of us didn’t see the results until we came back separately. The photos were all taken using cell phones. All photos by Naoko except the ones with the sixthseal.com watermark. It was the most fun I had in the office for ages! It does wonders for creativity too. 😉

Without further ado, the battle report: 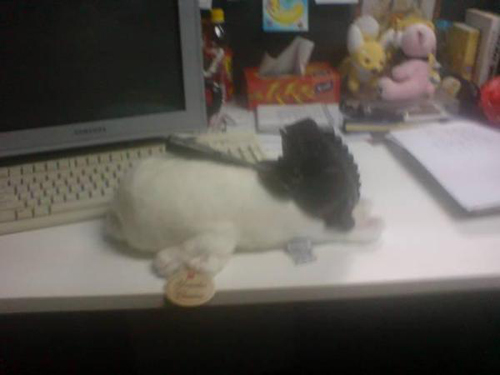 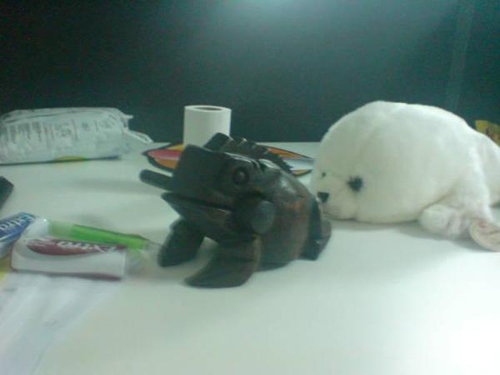 Shugo stalks a frog. Tsathoggua is infuriated by being called a mere frog. 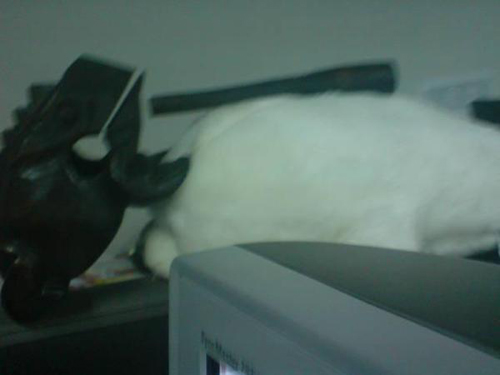 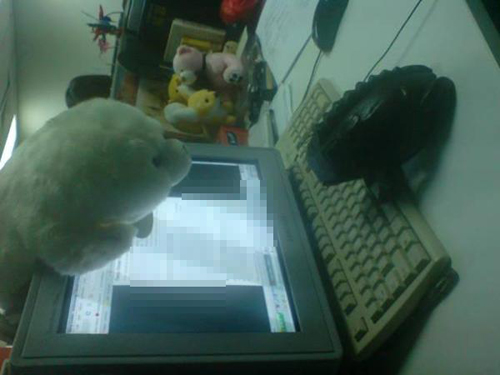 Shugo goes into hiding. The taunt: You can’t catch me. 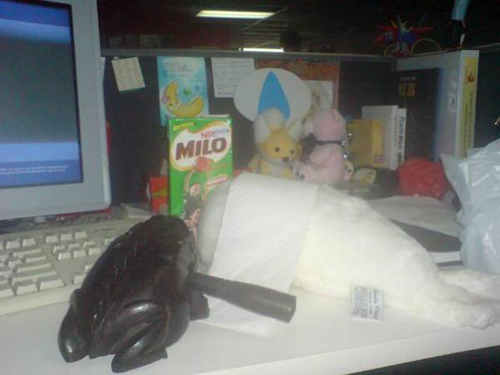 Incensed, Tsathoggua emulates the juvenile behavior and proceeds to TP Shugo with a spare roll of toilet paper. 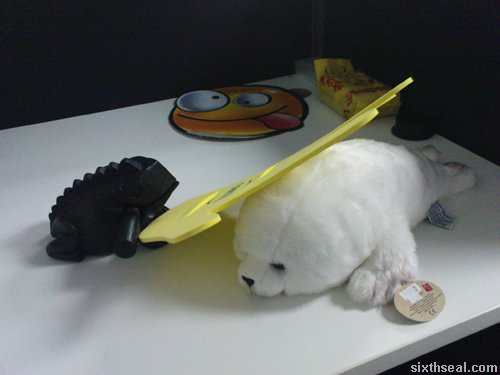 Tsathoggua immediately launches a follow up attack – The righteous smiting hand of (The Elder) God. 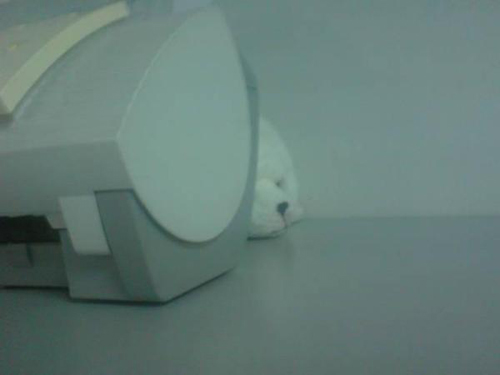 Shugo goes into hiding after being mortally wounded. 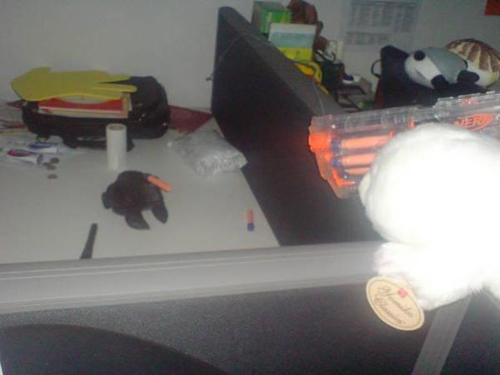 Unfortunately, the nefarious Shugo snuck up with a Nerf gun (nefarious, Nerf, geddit?) and struck Tsathoggua in the head. 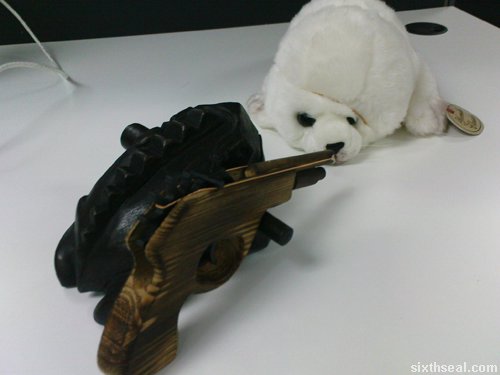 Tsathoggua is made of wood. He cannot be hurt by mere foam. Angered, Tsathoggua unleashes The Eldritch boomstick from Out of Time to finish off Shugo.

Thus bound by elastic bands, Shugo the seal is unable to use his flippers and drowned in the deep, black seas. THE END!

The melee lasted almost a week but after a long and prolonged attack, with heavy casualties on both sides, Tsathoggua emerges, victorious!

19 thoughts on “The Chronicles of Tsathoggua”