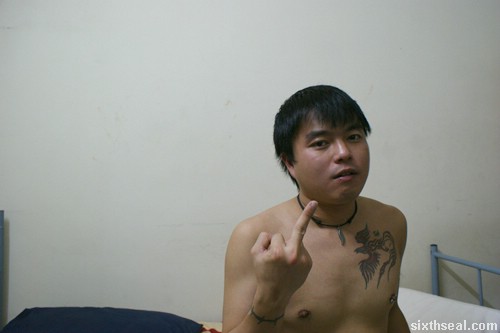 I had four drinks. FOUR. I was sober as hell when I drove home. I was praying to the heavens above that there won’t be a road block coz I’m a cop magnet.

No don’t guess, you know from the title of the post.

I kena road block. Jalan Kuching while going back from Zouk.

The first car was stopped, the second car was let go, and I was hoping mine would be too since I was ferrying 2 girls and didn’t look too dodgy.

That was not meant to be.

The police asked me if I had drank tonight. I wanted to be truthful so I said yes, a little.

I blew (cheated coz I held air in my mouth and exhaled halfway).

The cops asked me to do it again and I failed. There isn’t even any indication of how much I have exceeded the limit. It can’t be much since 1 drink per hour is the usual rule of thumb.

I was told to get out of the car and you know the drill. Go to police station, blood test if you want to contest the breathalyser and overnight in jail.

The police refused. They had the BALLS to ask me to go back to my car and ask my friends for money. They took another look at me and said I had to go for a urine test too. WTF????

I went back and rummaged further and discovered I had RM 400. Mich passed me RM 100 and I told her not to give me anymore, not going to pay the pigs so much.

The fucking porker came over and I said RM 500 is all I have and passed it to him.

He was pretty happy and let me go, even telling me that there is an (unopened) can of beer in my car. It’s been there forever!

I am giving the middle finger here as a big fuck you to the men in blue not coz of the DUI (wasn’t even drunk but I shall not comment further). I’m not saying they are assholes for probably messing with the breathalyser to fail everyone who has taken a single sip. I am not angry at them for doing their job, staying up late at night, manning road blocks so your tax money is hard at work GETTING THEM SIDE INCOME.

I am pissed off coz they had the audacity to get me to ask my friends for more money.

Hello PDRM? It is my fault, what’s it gotta do with them? BTW, you have corrupted cops (not that it’s breaking news – it’s stale as a 4 year old slice of bread) every weekend pocketing money from people driving home from clubs.

…and to all the sanctimonious fucks out there, get off your fucking high horse – it happens to everyone. Yes, I was over the limit but 4 drinks within 3 hours isn’t that much. Yes, it is technically wrong to bribe cops. I’ll like to see you stick to your untested rationale when you’re damn tired and just want to go home and is threatened with a night in jail and a urine test. We’ll see what you’ll do then. Judge not lest ye be judged yourself.

Oh, and of course I know certain opportunist parties out there will say “See, that’s why you shouldn’t sit in Huai Bin’s car” and trying to pass it of as a joke. YOU are the joke my friend. Everyone knows you slam others in front of everyone else, I don’t know about other people but I certainly don’t take you seriously. I think you’re a malicious little fuck.

Anyway, if you don’t like reading rants, please go watch Barney the cute purple dinosaur on TV. Yeah, switch on that idiot box.

Ending on a more positive note, thanks Mich, you’re an angel. Cheers for agreeing to take over the wheel after that just in case there are more road blocks and for everything else. <3

46 thoughts on “RM 500 bribe for failing a breathalyser test”