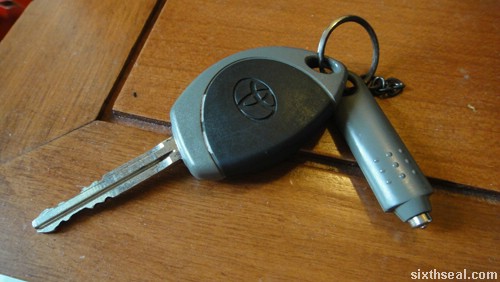 I feel like blogging about this coz it doesn’t happen very often (or at all) in KL. I was supposed to meet Michelle at Coffee Bean, bsc and I parked my car near the lift. Usually I instantly put my car keys in my pocket but I called her instead to see where she was since she arrived before me.

Thus, the keys were still in my hand and I put it on the table when I saw her.

We adjourned to Dome to meet someone and then sat at near the water feature in the central concourse to discuss several matters. Out of a sudden, this African man in a suit came up to me. I thought he wanted to sell me something until he asked me whether I had my car keys with me.

I checked my pockets and FML I really did leave my car keys behind!

(and didn’t even notice it)

Now, the time when I arrived to the time at the water feature was about 2 hours. The man searched for me for two hours while his daughter waited at Coffee Bean.

I’m pretty sure he’s not Malaysian but we can learn a thing or two from this man.

Thanks man, for your act of kindness. It’s very rare in this city. We sure could use more people like you. 🙂

53 thoughts on “The African man”