This is a tragic tale of why you shouldn’t gamble on vacations. T_T 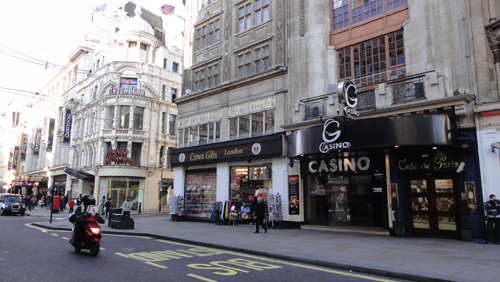 I didn’t spend a lot – most of it was on meals, beer and stuff for people so I still had a lot of pound sterling left. It got to a point where I had to put my wallet in my coat instead of my pants pocket coz it was bulging so badly I couldn’t stuff it in.

I was about to have lunch on Sunday when I noticed that everywhere was closed coz the eating establishments open from 12 pm onwards and I had an hour to kill.

I went into a sbobet mobile – it’s a very small operation with 3 roulette tables and 2 blackjack tables plus a couple of slot machines. I went in and got 400 pounds worth of chips as my buy in. The interesting thing about their roulette tables is that it’s yellow and black instead of red and black. 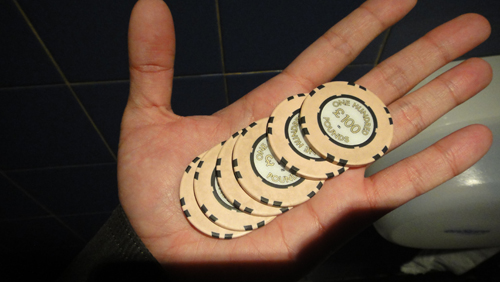 I thought that was interesting and put down 200 pounds (the maximum bet limit) on yellow. Lo and behold, around and round the ball it goes and what number it drops on I do not know but it’s a yellow number. =D

I snapped a picture of the GBP 200 pound win and cashed out 600 pounds (400 pounds was my original buy in). w00t! *pops champagne bottle and pours a bubbly for everyone and all that

Anyway, just a couple of hours ago I got off a bus at Victoria Coach Station and said goodbye to a friend. I had two options – go back and pack (it was dark and I was really tired) and head to the airport for Amsterdam…

Go to the lucky William Hill betting place where I won my GBP 100 for the lousy exchange rate I got the first day.

This was a losing streak so bad I embarrass myself recounting it. The roulette machine’s maximum bet limit was GBP 100 – I went in with a decision that I’ll bet 100 pounds on Black on the first spin and then 100 pounds on Odd on the second spin.

I figured this extra 200 pounds will help offset the exchange rate deficit since I’m going to be exchanging at least 1,300 pounds when I get back.

Well, I had to wait behind this dude who was playing 20 pence roulette so it took a while for him to finish. After he’s done I went and put 200 pound into the machine. I wanted to go for red since there was a bit of a red dragon going on but I remembered the Black-Odd routine and did that instead.

I lost. I went for Odd and lost again. T_T

It would be damn hard to get up from a 600 pound loss so I had a choice of walking away or hoping for a very unlikely last minute rally. I chose the latter and put in another 300 pounds into the machine.

The cashier at William Hill had to stop me coz the notes compartment was full and he took out the cash and rebooted the machine. Sigh. That was my money.

Anyway, with 300 pounds I had to go for numbers. I went for 10 numbers with 10 pounds each round (max bet limit) so the odds are slightly better than ¼ for a 36 times return. I swear Lady Luck was against me coz I thought I pressed 33 but apparently I didn’t. It came out 29, which I also didn’t put despite it being one of my favorite numbers (my age).

The next round was a savior round, if I had taken it. I didn’t pick 29 this time but 10 other random numbers coz I figured it won’t come out twice in a row. That was my lifeline, given by The Lord but I didn’t take it. T_T

29 came out TWICE in a row. Arrrghhhhh!

I’m down to my last 100 pounds and again I did not listen to the voice of God, resigning myself to fate and pressing random numbers. The result was a 6. A fucking 6 which I always get but didn’t in the last round coz I expected to lose. 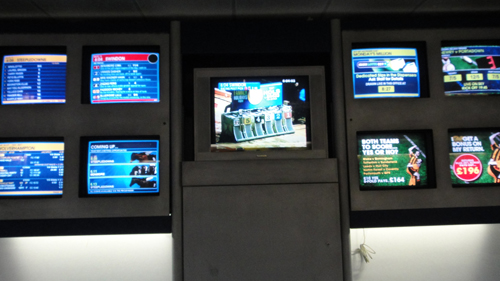 Anyway, I was walking home, dejected when I saw another William Hill and though hmm…why not? I’ve already lost so much anyway.

I went in, asked what the quickest race was (it was a dog race) and quickly bet 100 pounds on some random canine. He didn’t even place. T_T 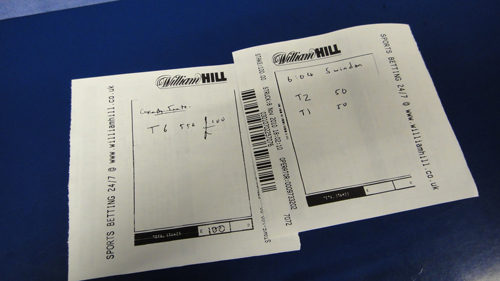 I decided to split my bets for the second round since this is not an even payout – the odds can be as high as 16 times so I can easily recoup my losses from a 50 pound bet.

I bet 50 on one horse and 50 on another – one a favorite to win and one a long shot with a high payout.

Both of my dogs didn’t even get into the top 3. T_T

What you can do with RM 5,000:
Buy a nice d-SLR
Go on an exotic holiday to Egypt
Buy a new notebook

I could have used that RM 5,000 to squeeze in another trip to Iran before the end of the year. 🙁

Third time is not the charm. I should have just gone home instead of trying to win a measly 200 pounds and losing 1,100 pounds in the process. It was a mistake to head in when I still had one leg of my vacation to go. Oh well.

I stopped betting coz I only had 1,000 pounds left and I needed to change that to Euros to go to Amsterdam. Now I’m here at the airport. I just paid 20 pounds to store my excess luggage for two days while I fly to Amsterdam and I’m starving but I don’t want to eat until I’m in Amsterdam coz the things here are so expensive.

I’m even too cheap to pay GBP 9.95 for 24 hour Internet access at the airport so I’m going to post this when I’m in Amsterdam.