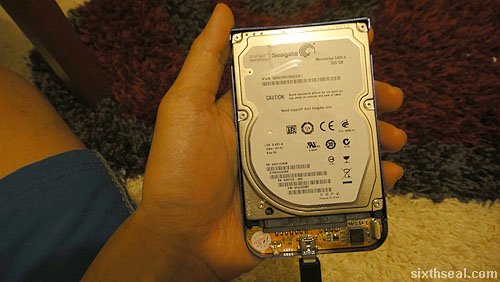 My notebook’s 320 GB hard disk had a head crash yesterday. I had to scramble to Digital Mall and find a replacement HDD (500 GB Toshiba – cost me RM 175) and an el cheapo 2.5″ SATA external HDD enclosure (RM 18). I finally managed to reinstall Windows 7 and get most off my stuff up and running (except for the Wi-Fi and LCD drivers) today. I still need a couple of apps but at least it’s usable now.

The good news: I managed to recover the majority of my photos and documents using a disk recovery software so that’s a relief. I haven’t done a backup since last year so there were a lot of travel photos inside.

However, I lost a Word document which is a work in progress I’ve been writing on and off on. It was in the primary partition (which the data recovery application could hardly read at all without the dreaded clickety clack sound) and it has a couple of month’s worth of writing, from when I did my last backup. T_T

I can still remember what to write (generally) but it’s a lot of content and I’m SURE it won’t be the same anymore. I know I can’t possibly remember all the anecdotes and witty asides that I typed when inspiration striked and I opened up that document to quickly put it down in words.

Oh well…it could have been worse, but damn does a HDD failure hurt. >.<